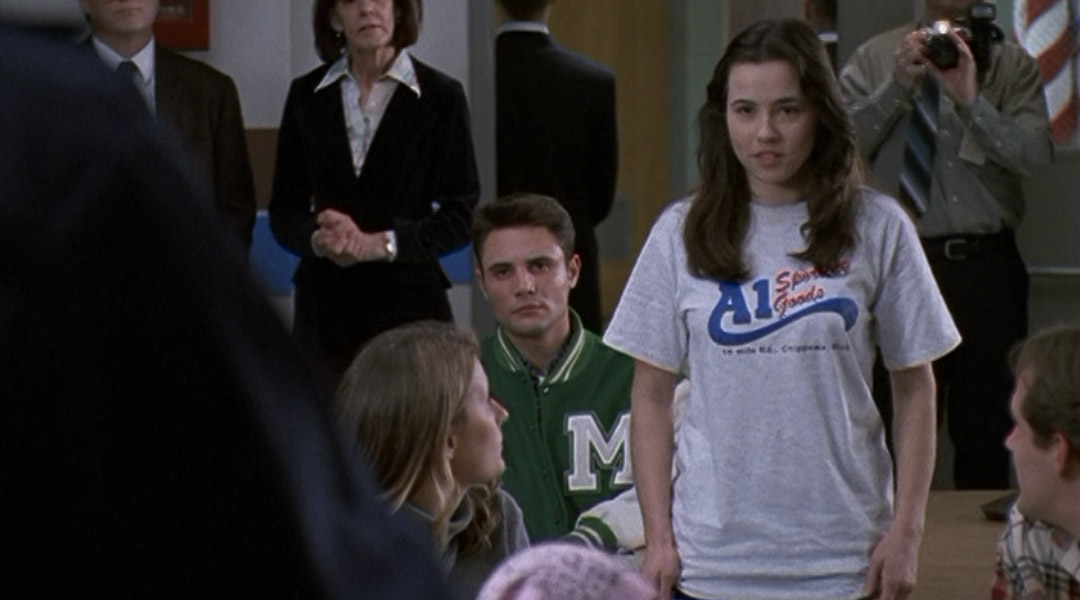 Mrs. Weir: So I hear something very exciting is happening this week at school.
Cindy: That’s right. Vice President George Herbert Walker Bush is coming to our school to speak at an assembly in the cafeteria.

Mr. Weir: You know, everyone’s a Democrat until they get a little money. Then they come to their senses.

Kowchevski (Steve Bannos): Alright you guys. Come on, beat it. There’s no hanging out under the stairs.
Daniel: What? Since when?
Kowchevski: Since the vice president is coming. Come on, give me a break. The Secret Service wants all these areas cleared out.
Daniel: How are we ever going to plan our coup?

Bill: Sam, don’t worry. It’s just a game. I mean, I’m good at Mouse Trap, and you’re really good at Kerplunk.
Sam: No. No no no, it’s not that. It’s just this thing with Cindy. She’s kind of, she’s kind of boring.
Bill: Really?
Sam: It’s weird hanging out with her friends. I mean, all she ever wants to do is make out and stuff.
Neal: I’d kill to be that bored.

Lindsay: I’m a Democrat.
Mr. Rosso: So?
Lindsay: So I wouldn’t have voted for Reagan if I was old enough. Why would I want to talk to his lackey?

Mr. Rosso: Come on, Lindsay. I was so excited for you to do it! You’re a special person and it’s your destiny—if you like it or not—to be interacting with world leaders.
Lindsay: Do you really believe that?
Mr. Rosso: You bet I do.

Mr. Rosso: I’ve got the best job in the world. Twelve grand a year and I’m overpaid.

Gordon dramatically: If it were me I’d take her to a Broadway show!
Sam: Broadway? We’re in Michigan.
Gordon: Dinner theater?

Harris: Laughter is the ultimate aphrodisiac. Get a woman laughing and you’ve got a woman loving.

Ken: I don’t want to break up with her. I really really like her. I might even… love her.
Nick: Really?
Ken: Yeah.
Daniel: Does that mean you’re gay?
Ken: I don’t know. Does it?
Daniel: I was joking.
Ken: Oh.

Mr. Rosso: Look, there’s nothing wrong with being gay. It’s just not my personal preference.
Ken: I think I better get going.
Mr. Rosso: Ken. You can stay and talk about this.
Ken: No, I don’t think I can.

Cindy: So I told Todd that Republicans aren’t selfish, it’s just that they don’t believe poor people should get handouts. I mean they should get jobs. Handouts just make them lazy, don’t you think?
Sam: Uh yeah, I don’t know. I guess so.
Cindy: They do. Todd never understood. He’s a Democrat. They like handouts.

Mr. Weir: Your only affiliation to any party right now is the Weir party. We need help.

Sam: Just because a girl’s pretty doesn’t mean that she’s cool.
Neal: Okay. Sam. First of all, of course it does.

Sam: We never have any fun together.
Ken: That’s too bad, man. Really. My girlfriend’s pretty cool when it comes to stuff like that.
Sam: God, then what’s the problem?
Ken: I don’t know.

Cindy: No, Sam. You can’t break up with me. You’re supposed to be nice. That’s the only reason I’m going out with you in the first place.
Sam: Hey! I’m nice. I’m just not having any fun. Are you?

Lindsay: Mr. Vice President, my name is Lindsay Weir. My dad owns A-1 Sporting Goods on 16 Mile Road. My question is: Why did your staff reject my question? Are you afraid of an open discourse with the students?