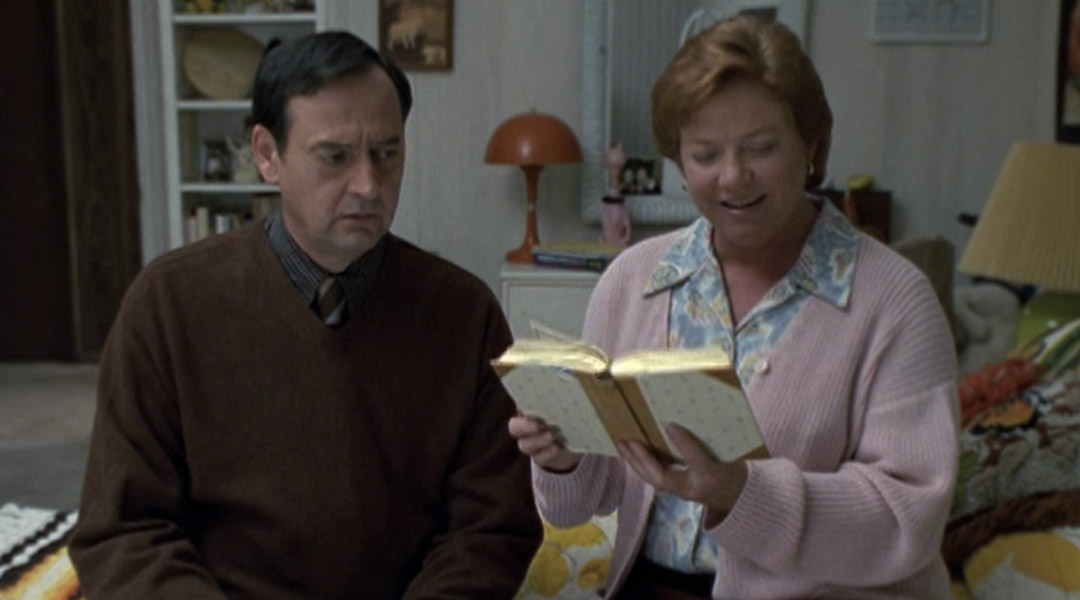 Lindsay: This is cool. Hitchhiking. It’s like in Kerouac, you know?
Kim: Kerouac?
Lindsay: Jack Kerouac. He wrote On the Road. Kim we’ve been reading it in English class the last two weeks. Where you been?
Kim: All we ever do in that class is read. Ooh ooh ooh! Stick out your thumb, wouldja?
Lindsay: We’re so sheltered, you know? There’s this whole other America out there. The person who picks us up could be an artist or a psychic or an escaped felon. It’s so exciting.
Kim: Okay, one thing that helps: point your boobs towards the road.

Mr. Weir: This? The thumb. Do you think I don’t know what that means. I know, Lindsay. It means, “Hey, stranger, please lock me in your car. Drive me to god-knows-where and murder me.”

Neal: Wait. All the teachers numbers are there?
Bill: Phone.
Sam: Think we could be arrested for making prank calls?
Neal: Yeah. And we’ll get sent to telephone prison.

Coach Fredricks: Hello?
Bill: Um, hello? Coach Fredricks?
Coach Fredricks: Yep.
Bill: This is Mr. Crisp, Gordon Crisp’s father.
Coach Fredricks: Mr. Crisp? Uh, how are you?
Bill: Not good. I wanna give you a piece of my mind. I think it’s very unfair the way you’ve been running baseball in gym class. You always let the jock kids run the game. Now some kids, like Gordon—my son—never, never get a chance. ‘Cause you guys think he’s not very good. For example he may want to play shortstop. But, you know, you never give him a shot.
Coach Fredricks: Look, I’m sorry but, um, you know, I always assumed Gordon didn’t have any interest in sports. You know what I’m saying?
Bill: Well he does. Don’t judge a book by its cover.

Mr. Weir: I mean what’s it say about Kim Kelly?
Mrs. Weir: Nothing. Just that she thinks Kim Kelly has some….
Mr. Weir: What?
Mrs. Weir: Well, a different word for courage.
Mr. Weir: Huh? Oh! Well does it say anything about drugs? Pot? Acid?
Mrs. Weir: I don’t think so.
Mr. Weir: What does it say?
Mrs. Weir: “I’m sick of living in this claustrophobic suburban world—
Mr. Weir: Oh, get used to it.
Mrs. Weir: “—where everyone is trying to fit in. I feel like I lived in a world of scared robots. Obviously this is terrible, but two of the worst ones are mom and dad.”
Mr. Weir: What? What do that mean?
Mrs. Weir: “They are the most boring, repressed people on the face of the entire earth.”
Mr. Weir: Repressed? I’ll repress her.
Mrs. Weir: “They say they love each other but who knows. It’s probably just part of their routine. Anyway, can robots really be in love?” Harold I don’t think we should be reading this.
Mr. Weir: Yeah yeah. Keep reading.
Mrs. Weir: Let’s see. “Their whole life is this monotonous routine. She cooks dinner—practically the same meal every night. He comes home barking at everyone like a fascist dictator, scared his…” Hm.
Mr. Weir: What?
Mrs. Weir: “…scared his penis will fall off if he ever helped clear the table. And she lets him walk all over her. I love them but it’s not the life for me. No thank you.”

Jock: Oh man. The geeks have inherited the earth.

Sam: What? I told you I couldn’t pitch.
Bill: Oh, it’s not about your pitching, Sam.
Sam: Well then what are you doing out here?
Bill: I just always wanted to call a meeting on the mound. This is so cool.
Neal: Hey. Meeting on the mound? Very cool.