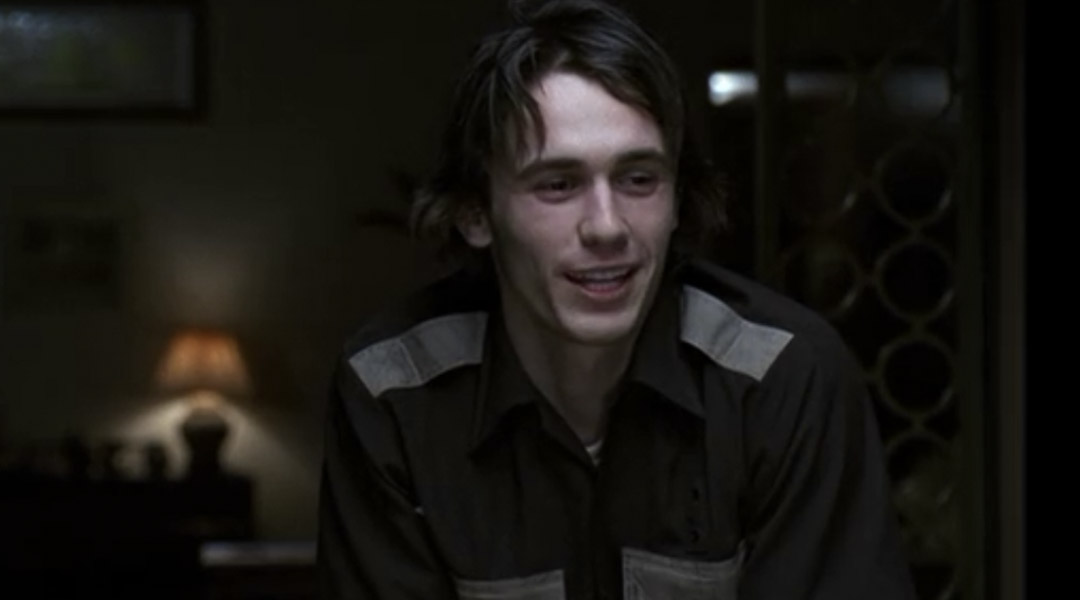 Daniel Desario (James Franco): Oh man, you wanna hear something way messed up? You know that Molly Hatchet shirt I was wearing the other day? You know the one with that executioner guy holding that bloody axe, under his foot’s the severed head.
Ken (Seth Rogen): Yeah. That’s my shirt.
Daniel: Yeah so, my mom she makes us go to church every week. And we gotta dress up. And so I get there and the stupid priest says I can’t come in.
Curly-haired guy: You can’t wear stuff like that at church, man.
Daniel: Why not, man? It’s church. You’re supposed to forgive people there. So you hate my shirt. Forgive me, lemme come in.

Nick about going to Homecoming: I’d rather make out with Principal Barber.
Daniel: Again?

Daniel: Wow. The designated driver’s pretty hot. I’d like to get her drunk.

Daniel: I love being told not to drink by a pot-head hippie guidance counselor.
Lindsay: There’s probably a bar in the teacher’s lounge.

Millie: Your car is really loud. My dad says you need a muffler. Once, he even threw a rock at you as you drove by. But… I guess you didn’t hear it.
Daniel: He threw a rock at me?

Nick: So hold on a second. So they’re called Santana, right? But that guy who’s singing is not Santana.
Daniel: No. Santana’s the guitar player.
Nick: Then how did he get them to name the band after him?
Daniel: I don’t know, man. Maybe he’s just a bad ass.
Nick: If that’s true then that’s… amazing.
Daniel: Hey, maybe we should name our band Desario.
Lindsay: Hey! I’m going out with you guys tomorrow night.
Nick: Hey that’s great.
Daniel: Yeah but what about your mom? How’s she going to hand out candy all by herself?
Lindsay: Well. She’ll survive.
Daniel: Well well well.

Daniel: Hey, knock it off, Blondie. You’re gonna blow the speakers.
Kim Kelly: Oh I’m sorry, Grandpa. I’ll try not to blow anything of yours from now on.

Millie Kentner: Hey! Those are for my French class.
Daniel: But I love sprinkles!
Millie: Fine just eat it.

Daniel: These types of books just make me think of all the crap that can go wrong inside of you. Why are you reading this?
Sam: I’m taking sex ed with Mr. Fredricks. He embarrassed me in front of the whole class just ’cause I’m a little bit behind when it comes to that sort of stuff.
Daniel: Yeah. I know how that goes.
Sam: You do?
Daniel: You know, you’re not going to learn anything useful from a book like that.
Sam: No?
Daniel: No. I’ll tell you what, I’ll find you at school tomorrow. I’ll set you up.
Sam: With what?
Daniel: Don’t worry. It’s cool.

Lindsay: You know, I didn’t break up the band. I just wanted to help Nick.
Daniel: He doesn’t need any help.
Lindsay: How can you say that? If he doesn’t make it as a drummer then he has to go into the Army.
Daniel: What? He’s not going to make it as a drummer. So why don’t you just let him have some fun before he has to ship off.

Daniel: Every old person thinks they’re so smart. What, there’s like no dumb old people?
Nick: Yeah.
Ken: I just wanna be older so I can go to bars. Everything fun in this world happens in bars.

Howie Gelfand (Jason Schwartzman): Alright. How many do you guys need?
Nick: Four.
Howie: Didn’t I just get you one? You lose it already?
Daniel: Yeah, I’m not into astrology okay?
Howie: Astrology. It’s not astrology, it’s you, man. It’s facts. It’s who you’re supposed to be. June: Cancer. Libra: October. Capricorn: December. Know it. 1958. You are them.
Daniel: You gonna give us the I.D.’s or not?

Ms. Yeats: Mr. Desario, don’t you have something to do?
Daniel: Right. But I thought we were going to do that after class, Ms. Yeats.
Ms. Yeats: Bestill my beating heart.

Daniel: Hey. Check it out. Donkey basketball Saturday. I love those things.
Lindsay: I think they’re mean.
Kim: Oh, yeah. Like the donkeys even give a care.
Lindsay: Well how’d you like some big fat teacher on your back while you run around a gym.
Daniel: Yeah, how did your date with Fredricks go?

Daniel: I’m so sick of all this rah-rah stuff. These jocks think they’re such bad asses. Walking around like they cured cancer.

Daniel: This place is turning into a cult.

Harris: You’re not going to beat me up are you?
Daniel: No. What are you reading?
Harris: The monster manual. It’s the Dungeons and Dragons Handbook. Do you play?
Daniel: No.
Harris: You should. You’d make a good Dungeon Master. I can tell.
Daniel: Oh yeah? Thanks. Can I ask you something?
Harris: Sure.
Daniel: What do you make of me?
Harris: Excuse me?
Daniel: Well if someone asked you, “What do you think of Daniel Desario?” what would you say? Would you he’s a loser?
Harris: No, You’re not a loser because you have sex. But if you weren’t having sex then we could definitely debate the issue.

Daniel: It’s like the tortoise and the hare, alright? The little rabbit gets tired, guess who wins?
Ken: Are we still talking about the same thing?

Daniel: Just look at him. He’s a freakin’ mess.
Ken: You are holding out on us!
Daniel: Of course.

Daniel: Mr. Rosso, I told you. I was just trying to get rid of my weed.
Mr. Rosso: How dumb do I look?
Ken: You really wanna know?

Kowchevski: Alright you guys. Come on, beat it. There’s no hanging out under the stairs.
Daniel: What? Since when?
Kowchevski: Since
the vice president is coming. Come on, give me a break. The Secret Service wants all these areas cleared out.
Daniel: How are we ever going to plan our coup?

Daniel: All right, fine, I’ll be a dwarf, but my name is Carlos.
Bill: Carlos the dwarf?
Daniel: Yeah, you got a problem with that, Gorthon?