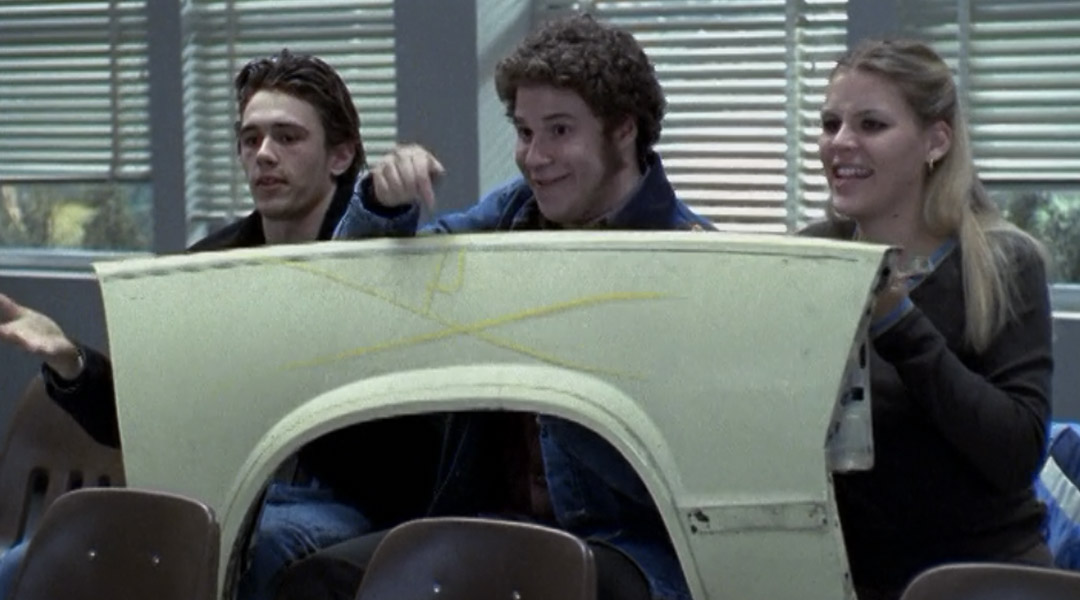 Ken: We’re gonna blow the roof off his garage in the most rock-tagious way.

Neal: I hate being in school after it’s out. Makes me feel like a janitor.

Sam: What’s so great about him anyway?
Neal: It’s the hair.

Harris: It’s an interesting look, Sam.
Neal: Nah. Your hair’s not long enough to pull that off.
Bill: I think it looks weird. Like you’re trying to be all fancy.
Gordon: I don’t think you should worry about how you look, Sam. My mom always says you should be happy with what the good Lord gave you.
Bill: Yeah, well the good Lord gave you a lot, Gordon.
Sam: Bill!
Gordon: My whole family’s big-boned. It’s genetic.
Harris: Besides, the world loves jolly fat guys. Burl Ives. Jackie Gleason.
Gordon: Santa Claus. Curly. Raymond Burr.
Neal: No. Raymond Burr isn’t jolly.
Gordon: Well he was extremely nice to me at last year’s auto show.

Neal: You look like your mother dresses you.
Sam: Hey. Well, at least I don’t look like a ventriloquist’s dummy.
Neal: Don’t kill the messenger. I know I look good.

Kowchevski: Ladies, please! This is just for tomorrow’s scrimmage. This isn’t the last chopper out of Saigon. So can we please just crank down the drama a notch, okay?

Neal: Why did you buy that?
Sam: Hey, you’re the one that said I should dress better.
Neal: Yeah, I didn’t say you should dress like Evel Knievel.
Bill: You guys, I think we’re directing more attention to us by doing this.
Gordon: This is cool. I feel like I’m in the secret service.

Harris: You’re not going to beat me up are you?
Daniel: No. What are you reading?
Harris: The monster manual. It’s the Dungeons and Dragons Handbook. Do you play?
Daniel: No.
Harris: You should. You’d make a good Dungeon Master. I can tell.
Daniel: Oh yeah? Thanks. Can I ask you something?
Harris: Sure.
Daniel: What do you make of me?
Harris: Excuse me?
Daniel: Well if someone asked you, “What do you think of Daniel Desario?” what would you say? Would you he’s a loser?
Harris: No, You’re not a loser because you have sex. But if you weren’t having sex then we could definitely debate the issue.

Sam: Mr. Rosso, I dressed up to impress Cindy Sanders.
Mr. Rosso: Sam, some of my friends are the dirtiest, stinkiest guys you’ll ever meet. But they date more women than you or I could ever hope for. It’s all about confidence. It’s true.

Ken: Hey, I didn’t get all gussied up to sit here alone, man!