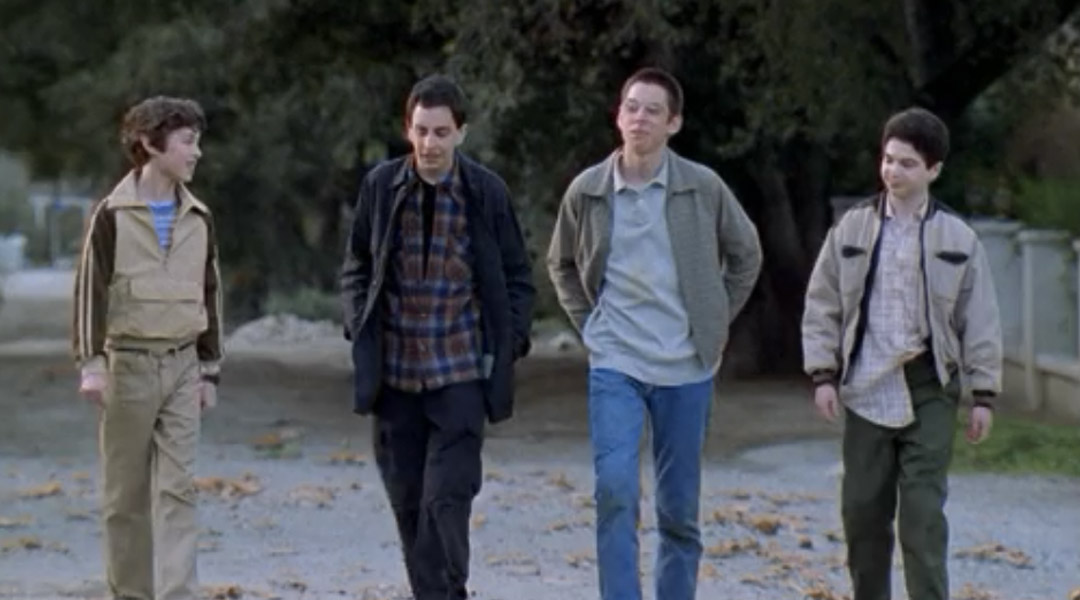 Daniel Desario (James Franco): Oh man, you wanna hear something way messed up? You know that Molly Hatchet shirt I was wearing the other day? You know the one with that executioner guy holding that bloody axe, under his foot’s the severed head.
Ken (Seth Rogen): Yeah. That’s my shirt.
Daniel: Yeah so, my mom she makes us go to church every week. And we gotta dress up. And so I get there and the stupid priest says I can’t come in.
Curly-haired guy: You can’t wear stuff like that at church, man.
Daniel: Why not, man? It’s church. You’re supposed to forgive people there. So you hate my shirt. Forgive me, lemme come in.
Nick Andopolis (Jason Segel): Hey, I believe in God, man. I’ve seen him, I’ve felt his power. He plays drums for Led Zeppelin and his name is John Bonham, baby!

Alan White: Sam Weir. You really like Bill Murray, don’t you?
Sam Weir (John Francis Daley): Yeah, he’s great.
Alan: Bill Murray sucks, man.
Sam: No he doesn’t. He’s cool.
Alan: Oh really? What is he, your boyfriend? Sam Queer. It’s fighting time, Weir.
Sam: Leave me alone, Alan.
Alan: I’m sorry, I don’t speak geek. I always wanted to know what it’d be like to fight a girl.
Lindsay (Linda Cardellini): I’m a girl. Wanna see what it’d be like to fight me?
Alan: Weir’s sister has to protect him?
Lindsay: I’m not protecting him. I’m just trying to figure why it is you need to pick fights with guys who weigh less than 100 pounds.
Friend: Watch out, Alan. I think she’s high on pot.
Lindsay: Yeah. I might just go psycho. Wanna try me?
Alan: You’re dead, alright? As soon as your freak sister isn’t around I’m gonna cream you, man.
Sam: You know you really didn’t need to do that. I could have handled it.
Lindsay: Yeah, I know.
Sam: And by the way, I weigh 103 pounds. He walks off.
Lindsay: Sorry! Man. I hate high school.

Jean Weir (Becky Ann Baker): You know, I ran into Mrs. Patten today at Farmer Jack. And she said that she saw you smoking.
Lindsay: Well she’s crazy. Mom, I can’t believe you. You seriously think I would start smoking?
Harold Weir (Joe Flaherty): You know, I had a friend that used to smoke. You know what he’s doing now? He’s dead!
Lindsay: Daddy, if I started smoking I would tell you.
Mr. Weir: Oh. Good. Now I don’t have to worry.
Sam: Hey Dad, guess what? They’re showing Monty Python and the Holy Grail at the Parkway Saturday night. Neal, Bill and I are gonna watch it twice in a row.
Mrs. Weir: Sam, isn’t the Homecoming Dance Saturday night?
Sam: Yeah.
Mrs. Weir: Are you going?
Sam: No. Why would I do that?
Mrs. Weir: Well your sister’s going.
Lindsay: No I’m not.
Mrs. Weir: Alright, kids. HIgh school is for learning but it’s also where you should be learning to socialize. That’s what high school dances are all about.
Lindsay: No they’re not. It’s a chance for popular kids to experiment with sex in their cars.
Mrs. Weir: Lindsay!
Mr. Weir: Hey!
Lindsay: I mean, if that’s what you want me to do then I’d be happy to go.
Mr. Weir: You know, there was a girl in our school, she had premarital sex. You know what she did on graduation day? Died! Of an overdose. Heroin.

Sam: Why does my mom always put a note in my lunch? It’s so embarrassing.
Bill Haverchuck (Martin Starr): At least your mom doesn’t write the note on the bag.

Sam: Are you guys going to the Homecoming Dance?
Neal Schweiber (Samm Levine): Mmm, no.
Bill: I really don’t see that happening.

Girl: Ow! Don’t touch me, you scuzz.
Ken: I’m sorry. Your butt was calling to me.

Nick about going to Homecoming: I’d rather make out with Principal Barber.
Daniel: Again?
Nick: Shut up, man.

Sam: You really think Cindy likes me?
Bill: Hello! The jacket?
Neal: No way. We’re not her species.
Sam: Listen, just do me a favor. Ask around, see if she has a date for the dance.
Bill: Who should I ask?
Neal: Okay. The dance is tomorrow. She’s a cheerleader. You’ve seen Star Wars 27 times. You do the math.

Kim: I’m cutting. Who’s got gum? Ken offers her a piece. Oh yeah, that’s real great. Why don’t you blow your nose in some bread and make me a sandwich too.
Ken: Why is everyone crawling up my butt today?

Kim spills the contents of Lindsay’s bag on the floor
Ken: That is exactly why I don’t carry a purse.

Bill: These shorts aren’t exactly flattering, are they?
Sam: No. You look good.

Alan: You’re dead, Weird!
Bill: Alan?
Alan: What?
Bill: What’s the point of all this?
Alan: Point? The point is you’re dead too! Little Man.
Bill: I kind of wish I didn’t come to school today.

Coach Fredricks: Ladies! Put down the mascara, get in there and play!

Bill: Dodge ball’s kind of a stupid game, isn’t it.

Jeff Rosso (Dave “Gruber” Alan): So what’s going on here?
Lindsay: All I… I was trying to do something nice in a stupid school where nothing nice ever happens. But instead Eli broke his arm. Now I feel like the biggest idiot in the world.
Mr. Rosso: No. Why aren’t you taking part in the Academic Decathlon?
Lindsay: What?
Mr. Rosso: We need you! You’re our best mathlete.
Lindsay: Oh god. Please don’t say that.

Nick: Hey are you okay?
Lindsay: Is it just me or does the whole world suck?

Nick: You need to find your reason for living. You gotta find your big, gigantic drum kit. You know?
Lindsay: Maybe I’ll buy a clarinet.

Mr. Weir: You know who used to cut class? Jimi Hendrix. You know what happened to him? He died! Choking on his own vomit.
Lindsay: Daddy, I skipped Latin.
Mr. Weir: Oh. Well I can understand why you wouldn’t want to learn about that. It’s only the building block of our language.
Mrs. Weir: Well I’m just glad your Grandmother wasn’t alive to hear about this.
Mr. Weir: You can’t cut corners in life! You know who cut corners? Kennedy! Kennedy cut corners when he was running the Bay of Pigs. A lot of good men lost their lives because of it. You know who else cut corners? Janis Joplin.
Lindsay: Dad! What are you talking about?! You don’t make any sense. I just cut class and guess what? Everybody’s still alive. Just leave me alone!

Sam: Can I come in? Do you think that me, Neal and Bill could beat up Alan?
Lindsay: Just Alan? Yeah. Alan and his buddies. No to maybe.
Sam: That’s what I thought. Um, why are you throwing your life away?
Lindsay: Did Dad tell you to ask me that?
Sam: No. Millie did.
Lindsay: Figures. Forget it. You know, tell her to mind her own business.
Sam: You know just because she asked me to ask you doesn’t mean I was going to tell her what you said.
Lindsay: Sam. Did Mom and Dad tell you I was the only one with Grandma when she died?
Sam: No.
Lindsay: Yeah. They went down to the cafeteria to get some coffee. And all the sudden Grandma looked so terrified. I didn’t know what to do. She grabbed my hand, told me she didn’t want to go. She looked so scared, Sam. I said, Well, you know, can you see God or Heaven or a light or anything?
Sam: What did she say?
Lindsay: “No. There’s nothing.” She was a good person all her life and that’s what she got.
Sam: So… you do think that we could beat up Alan?
Lindsay: Yeah. He’s a goner.

Alan: What are you losers doing on my street?
Neal: Nothing.
Bill: We’re kind of here to beat you up.
Neal: Bill!
Bill: Well we are.

Rosso: Look, uh, I know you’re not happy about this. But don’t make me out to be the bad guy here. If the worst thing in your life is somebody makes you go to a dance, then I’d say you have a pretty good life.