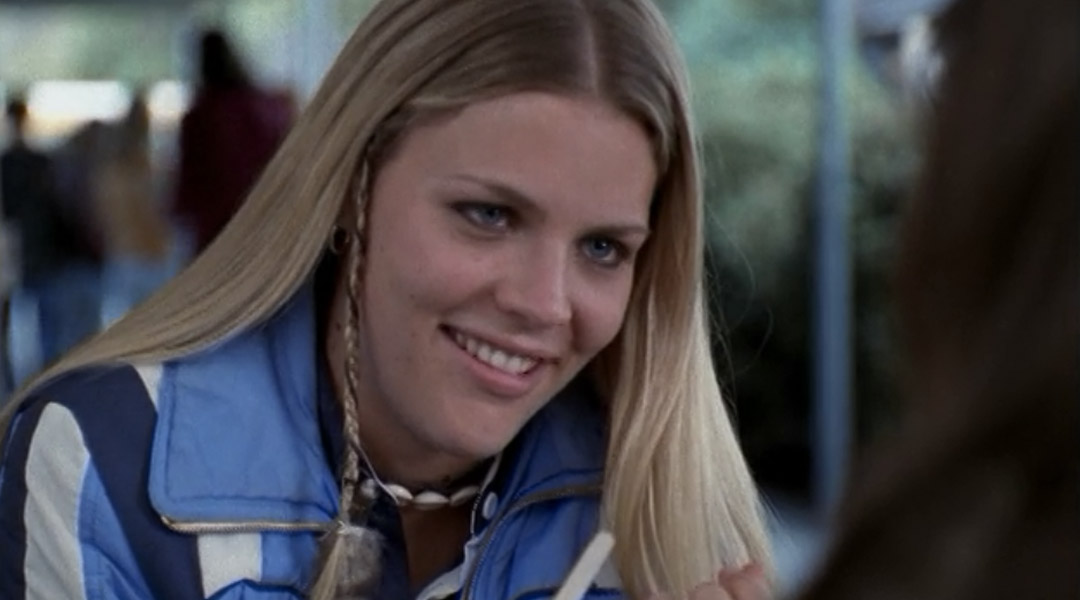 Kim (Busy Philipps): I’m cutting. Who’s got gum? Ken offers her a piece. Oh yeah, that’s real great. Why don’t you blow your nose in some bread and make me a sandwich too.
Ken: Why is everyone crawling up my butt today?

Kim: No, what you gotta do is look for something in the store that’s expensive, but looks really cheap. And then you switch price tags with something that is really cheap. Then you gotta put the original back on it and return it for store credit. That’s how I got this jacket. Ten bucks, this thing cost me.
Ken: It’s beautiful! Clearly worth all the effort.

Daniel: Hey, knock it off, Blondie. You’re gonna blow the speakers.
Kim: Oh I’m sorry, Grandpa. I’ll try not to blow anything of yours from now on.

Kim: My aunt Kathy was so rad. She lived in LA. She was on Kojak. She doinked Ryan O’Neal once at a party.
Lindsay: Wow. She sounds awesome.
Kim: Yeah well she’s dead. She OD’ed on coke.

Kim: So you see there’s a lot riding on this dinner. I can’t lose my car. Do you get it?
Lindsay: I don’t know if I do.

Kim: My life sucks!
Lindsay: No it doesn’t.
Kim: My parents hate me, I don’t have any friends. You’re like my only friend, Lindsay. You’re a total loser. No offense.

Karen: Hey, he hit on me.
Kim: Oh yeah? Well after school I’m gonna hit on you.

Kim: I heard that you jumped him.
Lindsay: What?
Kim: Don’t act innocent, Lindsay. I know you’re a slut.

Daniel: Hey. Check it out. Donkey basketball Saturday. I love those things.
Lindsay: I think they’re mean.
Kim: Oh, yeah. Like the donkeys even give a care.
Lindsay: Well how’d you like some big fat teacher on your back while you run around a gym.
Daniel: Yeah, how did your date with Fredricks go?

Kim: The last time Nick got dumped he kinda went a little berserk.
Lindsay: You mean Heidi Henderson?
Kim: He told you about that?
Lindsay: No. What happened?
Kim: No. Nothing. I mean I don’t even know really.

Kim: Come on, Daniel. Kick his ass!
Lincoln Kid: Kick my ass?
Daniel: Tell my mother that I love her.

Lindsay: This is cool. Hitchhiking. It’s like in Kerouac, you know?
Kim: Kerouac?
Lindsay: Jack Kerouac. He wrote On the Road. Kim we’ve been reading it in English class the last two weeks. Where you been?
Kim: All we ever do in that class is read. Ooh ooh ooh! Stick out your thumb, wouldja?
Lindsay: We’re so sheltered, you know? There’s this whole other America out there. The person who picks us up could be an artist or a psychic or an escaped felon. It’s so exciting.
Kim: Okay, one thing that helps: point your boobs towards the road.

Lindsay: I’m not going to want him back.
Kim: Alright. Yeah. Sure. Just don’t lead him on, okay? ‘Cause he’s obviously still in love with you.
Lindsay: No he’s not. Nick is the one who broke up with me, remember?
Kim: Oh yeah Lindsay. Like that fooled anybody. Come on!

Mrs. Bronner: Ladies, I’m not joking. Put out those cigarettes.
Kim: Oh, I’m sorry. I thought you were joking.