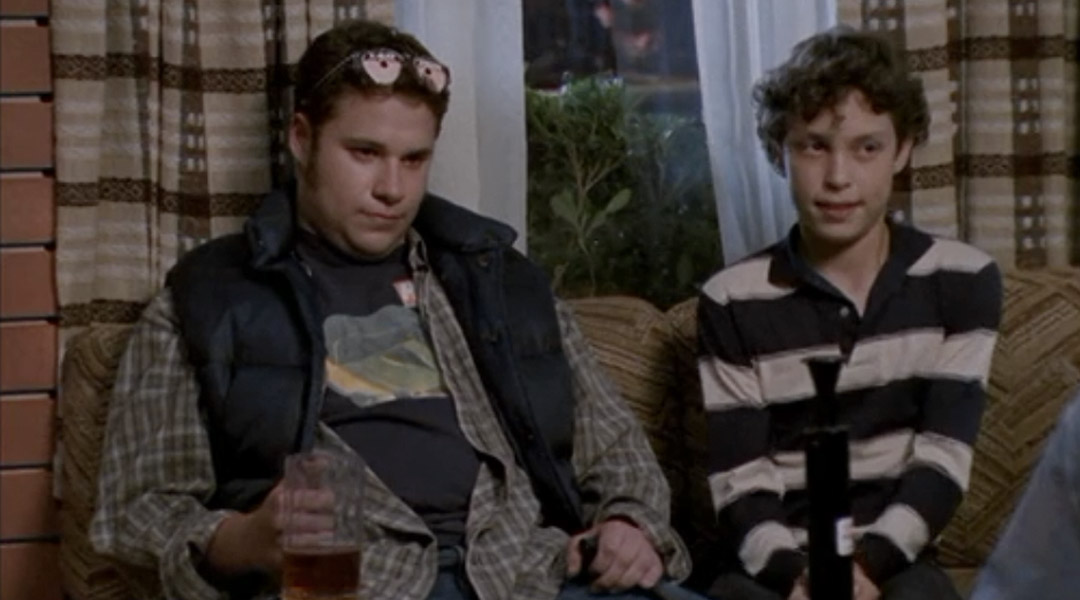 Mr. Weir (Joe Flaherty): You know those Sex Pistols? They spit on their audience.
Mrs. Weir: Oh, that’s terrible.
Mr. Weir: Yep, that’s what I want to do. Spend my hard-earned money to be spit on. Now that’s entertainment.
Lindsay: Oh come on, Dad. Every generation is afraid of the music that comes from the next. I’m sure your parents hated Elvis.
Mr. Weir: Elvis didn’t expectorate on his fans.
Sam: No. But he died on the toilet.
Mr. Weir: Well, that’s paradise compared to where those Sex Pistols are gonna end up.

Lindsay: What’s the matter?
Nick: John Bonham died.
Lindsay: Yeah. I know. Last week.
Nick: He’s dead. You know? It’s like he’s dead. And as a result there’s no more Led Zeppelin.
Lindsay: Well why don’t they just get a new drummer?
Nick: Are you— ? Just forget it.

Kim: No, what you gotta do is look for something in the store that’s expensive, but looks really cheap. And then you switch price tags with something that is really cheap. Then you gotta put the original back on it and return it for store credit. That’s how I got this jacket. Ten bucks, this thing cost me.
Ken: It’s beautiful! Clearly worth all the effort.

Nick: Hey does anybody wanna come see The Wall with me on Saturday night? Thought I might try an experiment—see it straight once.
Ken: Don’t do it! You’ll regret it, man. Trust me.

Bill: You’re in love with Lindsay.
Neal: I am not! What are you talking about?
Bill: Why are you getting so mad?
Neal: I’m not! Why would you say that?
Bill: Because you have your book in front of your pants.
Neal: Shut up! Jerk.

Daniel: Wow. The designated driver’s pretty hot. I’d like to get her drunk.

The McKinley High Sober Students
Harris: Hey Mary. Happy Birthday.
Millie: Oh. Thank you, Bob. How’s it going?
Harris: Good. You did a really nice job decorating here. Do you know if anyone here has any cocaine?

Daniel: I love being told not to drink by a pot-head hippie guidance counselor.
Lindsay: There’s probably a bar in the teacher’s lounge.

Sam to Lindsay: Friday night. Always a good night for some Sabbath. pause ‘Cause, you know… Friday… is the Sabbath… for the Jews.

Student: Nah, Neal. No. You wouldn’t want to trade places with me. Believe me.
Neal: I don’t know, I mean I’m Jewish. That’s no cakewalk either. I was elected school treasurer last year. I didn’t even run.

Ken: I am the Lord of Quarters!

Sam: Why did Neal invite her? Now she’s going to see all the dumb stuff in my house.
Bill: His plan is to distract you so he can hit on your sister.
Sam: Oh man! I’m so dead. What am I going to say to Cindy?
Bill: Don’t say anything.
Be dominant. It’s all— all about dominance. I saw this monkey show on PBS, you talk to her first it’s a sign of weakness. And she will not pick you to be her mate.
Sam: Are you drunk?
Bill: I think so. Yes I am.
Sam: Oh man! Go into my room, lock the door, and don’t drink anymore.
Bill: That’s very dominant.

Neal: Sometimes it helps to talk to someone.
Lindsay: I’m too drunk to talk!
Neal: No, that’s okay. I speak drunk.

Bill is passed out drunk on the floor
Lindsay: Hey, Bill. Get up. That’s how that drummer from Led Zeppelin died.