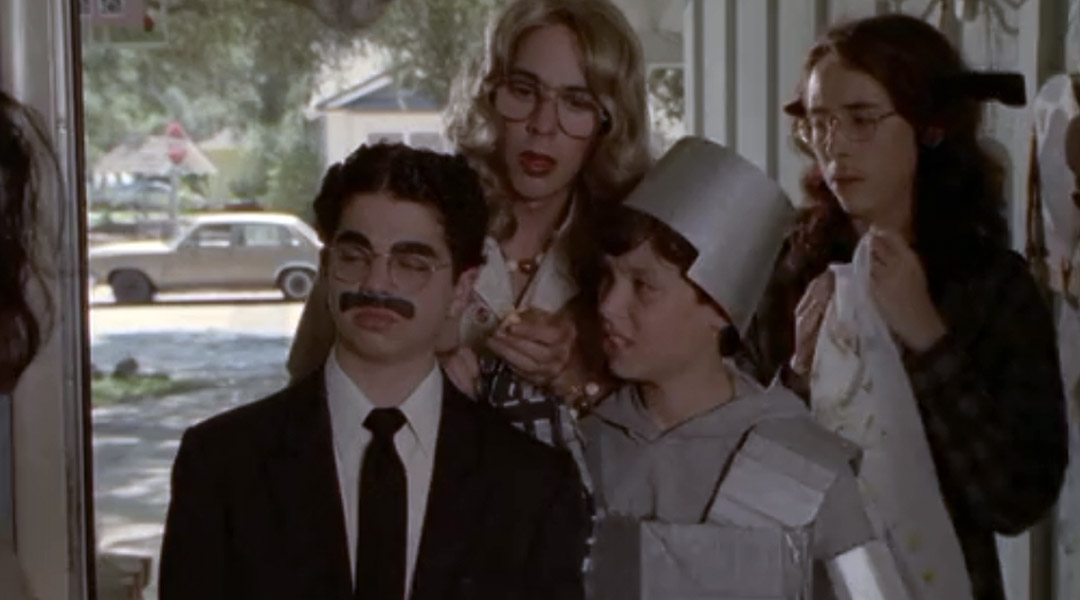 Bill: Nothing from the garage.
Neal: Okay.
Bill: And it has to be food. Okay? Nothing from under the sink. No cleansers, no detergent, no furniture polish. And no cut-up bits of sponge.
Sam: Okay.
Bill: I’m just trying to to win ten bucks here. I don’t wanna die.

Mrs. Weir: Honey, the boy’s fourteen. Huh? He can miss a night of walking around, begging like a tramp. Halloween’s for little kids anyway.
Mrs. Weir: Hey Lindsay, you’re still going to hand out candy with me, aren’t you? Remember how much fun we had last year, looking at all the little kids in their costumes?
Lindsay: Yeah, Mom. I told you I was going to.
Mrs. Weir: Good! ‘Cause we’re going to have a really good time this year. I promise.

Millie: You want some Lik-m-aid?
Lindsay: No—. You eat candy now? Millie, it’s 7:30 in the morning.
Millie: It’s just Lik-m-aid. It makes my spit taste like fruit juice.

Millie: Your car is really loud. My dad says you need a muffler. Once, he even threw a rock at you as you drove by. But… I guess you didn’t hear it.
Daniel: He threw a rock at me?
Kim: Hey kid, what the hell are you eating? Is that laundry soap?
Millie: It’s Lik-m-aid. Want some?
Lindsay: Millie—
Kim: Um, I’ll pass.

Mr. Rosso: Hey! If it isn’t the Amelia Earhart of McKinley High.
Lindsay: What does that mean?
Mr. Rosso: Well, you head to class but you never seem to get there.
Lindsay: Mr. Rosso, could you not humiliate me in front of the whole school?
Mr. Rosso: Come on. Lindsay. Don’t turn me into the man here. I’m just trying to help you.

Nick: So hold on a second. So they’re called Santana, right? But that guy who’s singing is not Santana.
Daniel: No. Santana’s the guitar player.
Nick: Then how did he get them to name the band after him?
Daniel: I don’t know, man. Maybe he’s just a bad ass.
Nick: If that’s true then that’s… amazing.
Daniel: Hey, maybe we should name our band Desario.
Lindsay: Hey! I’m going out with you guys tomorrow night.
Nick: Hey that’s great.
Daniel: Yeah but what about your mom? How’s she going to hand out candy all by herself?
Lindsay: Well. She’ll survive.
Daniel: Well well well.

Mr. Weir: Sam, what are you doing? You’re too old to go out trick or treating.
Mrs. Weir: Oh, Harold. Stop.
Mr. Weir: Well it’s true. There was this kid in my neighborhood growing up, Scott Byron. He kept on trick or treating until he was well into his 20s. You know where he’s living now? At home! With his ninety-year-old mother. He’s the laughingstock of the community. Never took a wife either.

Harris: Hey guys, I heard you were going out for trick or treats tonight.
Sam: How did you find out about that?
Harris: Eh, word gets out, people talk. But you gotta be especially careful though, the Halloween candy’s going to be really dangerous this year.
Bill: They say that every year.
Harris: Yeah, but this year there’s a bunch of evil hippies that don’t want Reagan to be president. So to interrupt the election they’re going to inject the candy with heroin, turn kids into addicts.
Sam: That’s not true! You just have to watch out for pins and razorblades.
Bill: Yeah, and rat hair is a big one.
Harris: You’re going to find yourself wishing for rat hair. Word on the street is they’re their putting poo in fun size candy bar wrappers and handing those out.
Bill: I love fun sized candy bars.
Neal: Oh that’s stupid. Like nobody’d be able to tell what it really was.
Harris: They dip it in chocolate first so you can’t tell the difference until it’s too late. See ya. he walks off and then turns back. Actually, it sounds kinda fun. Mind if I come with you guys?

Mrs. Weir: Sam, I laid your robot costume out on your bed.
Sam: You didn’t rip it, did you?
Mrs. Weir: No. But I wrote “My son’s the cutest boy in the whole world” on the front of it. Lindsay, I got you a costume. Go put it on, Sweetie! I’m gonna put these cookies by the door. We are going to have so much fun!
Sam: I kinda hate when mom gets goofy like that.

Bill: If I were the Bionic Woman, what would I wear?

Neal: This is ridiculous. I look like Tom Selleck.

Bill: I’m sorry Steve Austin. I can’t marry you. I’m mad at you right now. What? I’m sorry I can’t hear you. Hold on I’m gonna put the phone on my bionic ear. That’s, that’s better. No, don’t talk so loud! Don’t forget I’ve got bionic hearing. No! These are not bionic! These are all me!

Bill: Oscar Goldman! It’s me, Jamie Summers. Steve Austin is trapped in the, in the reactor— Hi. Mom. Okay, you can use the phone.

Mr. Weir: What the hell are you supposed to be?
Harris: I’m a guy with a knife through his head.
Mr. Weir: Oh. Well. Mission accomplished.

Daniel: Hey, knock it off, Blondie. You’re gonna blow the speakers.
Kim Kelly: Oh I’m sorry, Grandpa. I’ll try not to blow anything of yours from now on.

Bill: I just hope I get some candy I can eat. Yeah, I’m allergic to peanuts, licorice and nougats.
Neal: How can you possibly be allergic to nougat?
Bill: I don’t know. My doctor says I’m allergic to more things than anyone he’s ever seen.

Angry Parent: Hey! What’s the big idea scaring my kids?
Mr. Weir: I didn’t mean to, I—
Mrs. Weir: I’m sorry. I made him put this on. Here, give these to your children. They’re homemade.
Angry Parent: Are you crazy? I’ve been lecturing my kids for weeks not to take unwrapped candy. Those cookies could have razorblades or pins in them.
Mrs. Weir: I wouldn’t do that.

Chain Smoker (Pamela Gordon): What do you want?
All: Uh, trick or treat!
Chain Smoker: Aren’t you guys a little old for this?
Sam: We’re only freshmen in high school.
Chain Smoker: High school? That’s too old.
Harris: We’re young at heart.

Bill: Ma’am, I hope there aren’t any peanuts in those peanuts. ‘Cause if there are, I could die.

Neal: I can’t believe the Hot Dog-On-A-Stick girls saw us. That’s months of work down the drain!
Sam: Like they’d ever go out with you.
Neal: Hey, shut up! They like me. They always give me free lemonade refills.

Lindsay: Oh my god. We just egged my little brother.

Mr. Weir: Well. Certainly glad we all decided to celebrate Halloween. Last time I had this much fun I was pinned down in a foxhole by the North Koreans.

Mrs. Weir: The world is such a different place then the one I grew up in. Everything just seems so much meaner these days.
Lindsay: Mom, kids didn’t throw eggs when you were in school?
Mrs. Weir: I don’t know. I guess so. I just know I never did.

Sam: Nobody thinks you’re cool, you know.
Lindsay: Trust me, I know.

Mr. Weir: You okay?
Sam: Yeah. I’m just reading a book for school.
Mr. Weir: Is it any good?
Sam: I don’t know yet. Everyone’s name is really weird and long.