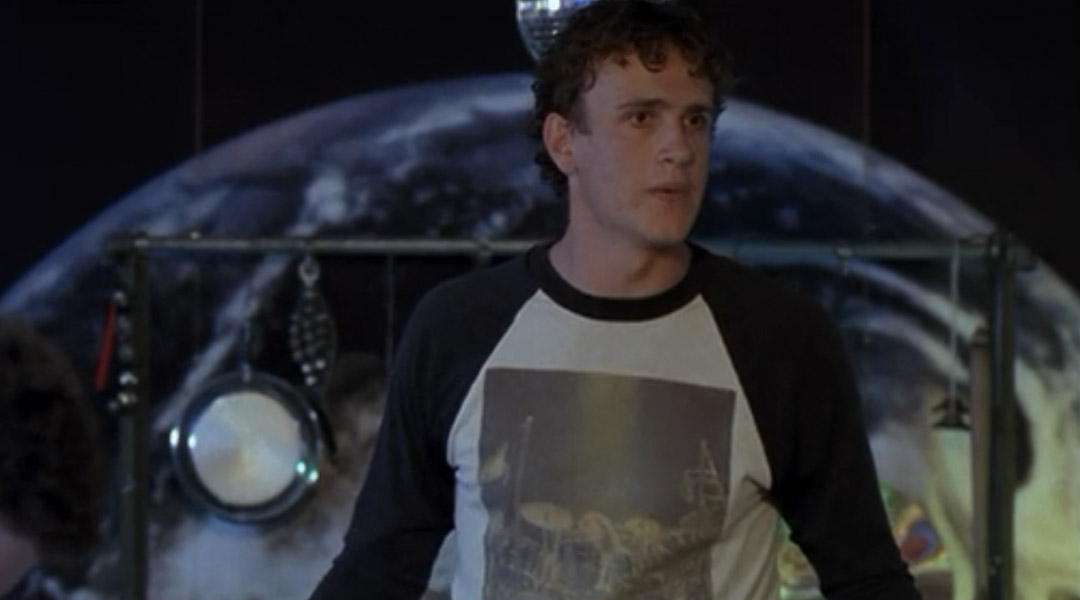 Nick Andopolis (Jason Segel): Hey, I believe in God, man. I’ve seen him, I’ve felt his power. He plays drums for Led Zeppelin and his name is John Bonham, baby!

Nick about going to Homecoming: I’d rather make out with Principal Barber.
Daniel: Again?
Nick: Shut up, man.

Nick: Hey are you okay?
Lindsay: Is it just me or does the whole world suck?

Nick: You need to find your reason for living. You gotta find your big, gigantic drumkit. You know?
Lindsay: Maybe I’ll buy a clarinet.

Lindsay: What’s the matter?
Nick: John Bonham died.
Lindsay: Yeah. I know. Last week.
Nick: He’s dead. You know? It’s like he’s dead. And as a result there’s no more Led Zeppelin.
Lindsay: Well why don’t they just get a new drummer?
Nick: Are you— ? Just forget it.

Nick: Hey does anybody wanna come see The Wall with me on Saturday night? Thought I might try an experiment—see it straight once.
Ken: Don’t do it! You’ll regret it, man. Trust me.

Nick: So hold on a second. So they’re called Santana, right? But that guy who’s singing is not Santana.
Daniel: No. Santana’s the guitar player.
Nick: Then how did he get them to name the band after him?
Daniel: I don’t know, man. Maybe he’s just a bad ass.
Nick: If that’s true then that’s… amazing.
Daniel: Hey, maybe we should name our band Desario.

Nick: You gonna sit over here now?
Lindsay: I just don’t feel like being abused today. I mean, I give up, you know? I go out of my way to be nice to her but it’s like—argh—no matter what I do, you know?

Nick: See Lindsay? We were made for each other.
Lindsay: You… want to make out or something?
Nick: No. All guys want to make out. But I just want to hold you. {he lays her down slowly onto the bed} What’s better than this?

Lindsay: I don’t smoke pot.
Nick: Come on, what’s the big deal? It’s from the earth, it’s natural. Why would it be there if we weren’t supposed to smoke it?
Lindsay: Dog crap is here and we don’t smoke that.