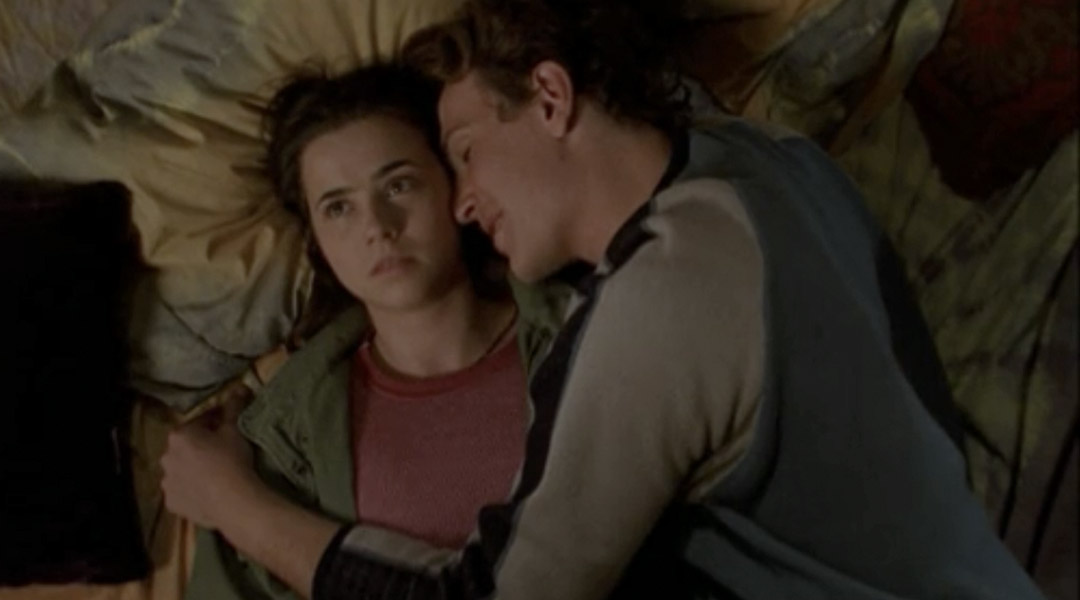 Mr. Rosso: So… I understand you and Nick Andopolis are getting pretty tight. How’s that going?
Lindsay: Mr. Rosso, Nick and I are just friends. That’s all.
Mr. Rosso: Hey, no need to explain anything to me. I got it on in a van at Woodstock so I’m not judging anybody.

Mr. Rosso: You’ve got to be careful these days.
Lindsay: Yeah, I know. I know.
Mr. Rosso: Do you? I thought I knew to. Until one night I was checking out this discotheque, the one in the bowling alley on 15 Mile. I met this girl, she seemed really nice. We danced a bit, I kissed her. One thing lead to another. And now I get sores on my lip once a month. I have herpes. It doesn’t hurt that much but believe me, you don’t want it.
Lindsay: Can I please go now?
Mr. Rosso: I just blew your mind, didn’t I?

Neal: Man. Gordon reeks. You think he ever takes a shower?
Sam: Maybe he takes baths instead. My mom says that they don’t really get you clean.
Bill: Yeah. You just sit in your own filth.

Mr. Lacovara (Trace Beaulieu): Alright. Let’s settle down. We’ve got a lot to do today. We’re going to be dissecting kittens. Just trying to get your attention.

Ms. Yeats: Mr. Desario, don’t you have something to do?
Daniel: Right. But I thought we were going to do that after class, Ms. Yeats.
Ms. Yeats: Bestill my beating heart.

Daniel: Hey. Check it out. Donkey basketball Saturday. I love those things.
Lindsay: I think they’re mean.
Kim: Oh, yeah. Like the donkeys even give a care.
Lindsay: Well how’d you like some big fat teacher on your back while you run around a gym.
Daniel to Kim: Yeah, how did your date with Fredricks go?

Kowchevski: Last one to class first one on welfare. It’s your choice.

Sam: Cindy is not abnormal.
Bill: Yeah? She cut the cheese.
Neal: Oh my god.
Sam: That’s not funny.
Bill: I heard it, man, I swear. She blamed it on the chair. But she cut the cheese.
Sam: Well some chairs make weird noises. What kind of a chair was it?
Bill: I don’t know. Vinyl?
Sam: Vinyl chairs always squeak.
Bill: It wasn’t a squeak. It was the sound of cheese being cut.

Lindsay it’s a test, not a race. And if it were a race, Millie already beat you.

Mr. Weir: Alright, thanks Mike. Oh and good luck with that bomb shelter.

Sam: Hey, why don’t we go ask Gordon to come with us.
Neal: But he smells.
Sam: Yeah, I know. But he’s really cool. Maybe he doesn’t even know he smells.
Bill: Are you gonna tell him?

Gordon: I know I smell, Sam.
Sam: What? What are you talking about?
Gordon: I may be smelly, Sam, but I’m not stupid.
Sam: Okay. So, what is that?
Gordon: It’s a medical condition. It’s called trimethylaminuria. It’s genetic.
Sam: Wow. Is there a cure?
Gordon: Not yet. But research is progressing.
Sam: So are you going to be smelly the rest of your life?
Gordon: Yeah. But I don’t mind. Nice people don’t care and it weeds out the jerks.

Nick: See Lindsay? We were made for each other.
Lindsay: You… want to make out or something?
Nick: No. All guys want to make out. But I just want to hold you. {he lays her down slowly onto the bed} What’s better than this?