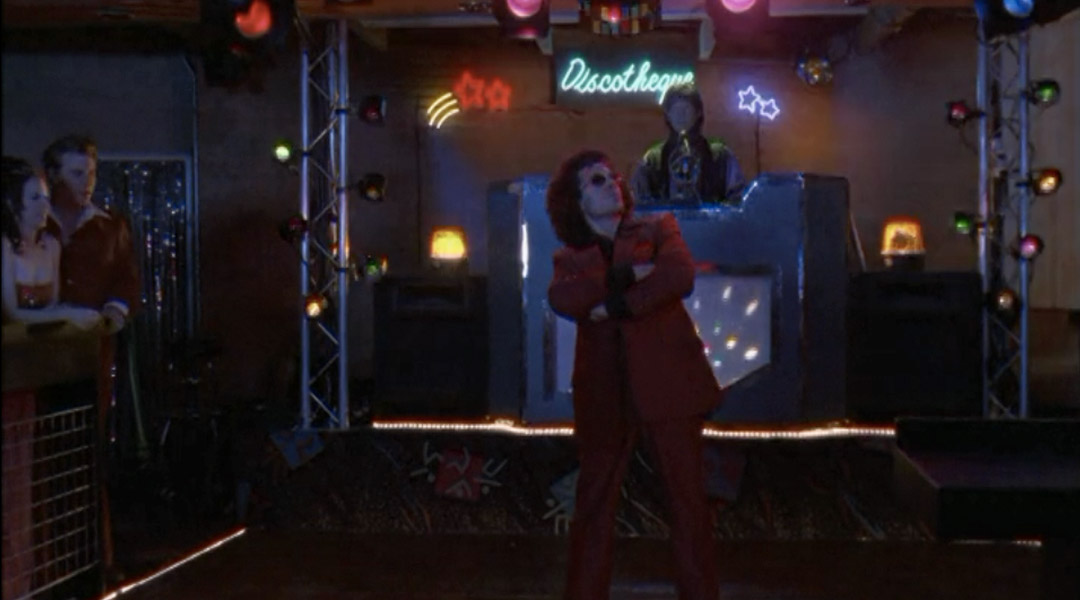 Mr. Fleck (Steve Higgins): You get called geeks. You get cleaned out. Girls don’t even look at ya—
Bill: I thought this was supposed to make us feel better.
Mr. Fleck: Hold on, Cool Breeze. It gets better. “What? I’m accepted at a Ivy League college?” “Hey, chicks did smart guys. Who knew.” “Woah. Look at me. I’m head of a Fortune 500 company.” “And yes, Mr. Jock who cleaned me out, I will take fries with that.”
Sam: Wait, no. That’s like a long time from now. We have to put up with this for another three years.
Mr. Fleck: That’s why you have to learn to enjoy the simple pleasures of life. {he pulls out a film canister with The Holy Grail}

Sara: This is such a cool vest, Kenny.
Ken: Kenny?

Ken: All right. I give up, Nick. When does Allen Funt come boogie-ing out?

Ken: Lindsay can you please start going out with Nick again? I can’t take much more of this.

Harris (Stephen Lea Sheppard): Hey Daniel, we’re playing D&D tonight. You wanna come?
Why?
Harris: I think you’d like it. We can show you how to play.
Gordon: …And the best part is, you get to pretend to be someone you can’t be in real life.
Daniel: Okay, I’ll play.
Neal: Really?
Daniel: Yeah, I’ll play. Just don’t expect me to be any good at it or anything.
Harris: You can’t possibly be any worse than Bill.
Bill: Hey!

DJ (Joel Hodgson): Oh check it out, kids. It’s our little opinionated rock and roller friend.
Ken: What the hell’s he talking about?
Lindsay: I think he’s talking about you.

DJ: Hey man. Aren’t you one of those guys who’s always yelling’ in here that Disco sucks? Well what’s the matter? Cat got your bong, man? Is that how you learned to communicate? Running in here, yelling stuff? Is that what your precious “rock” teaches you, friend?
Ken: Um no, man, it teaches me that disco sucks!

Daniel: A dwarf? I don’t want to be a dwarf. I wanted to be like a ninja or a fighter.

Daniel: Alright, fine, I’ll be a dwarf, but my name is Carlos.
Bill: Carlos the dwarf?
Daniel: Yeah, you got a problem with that, Gorthon?

Daniel: Hey, this is really fun. Do you guys want to do this tomorrow night?
Sam: Sure.
Gordon: Yeah.
Bill: I would, but Harris killed me again.
Harris: You had it com in, Bill.
Daniel: We’ll kick his ass tomorrow night, Bill. Just leave it to Carlos.