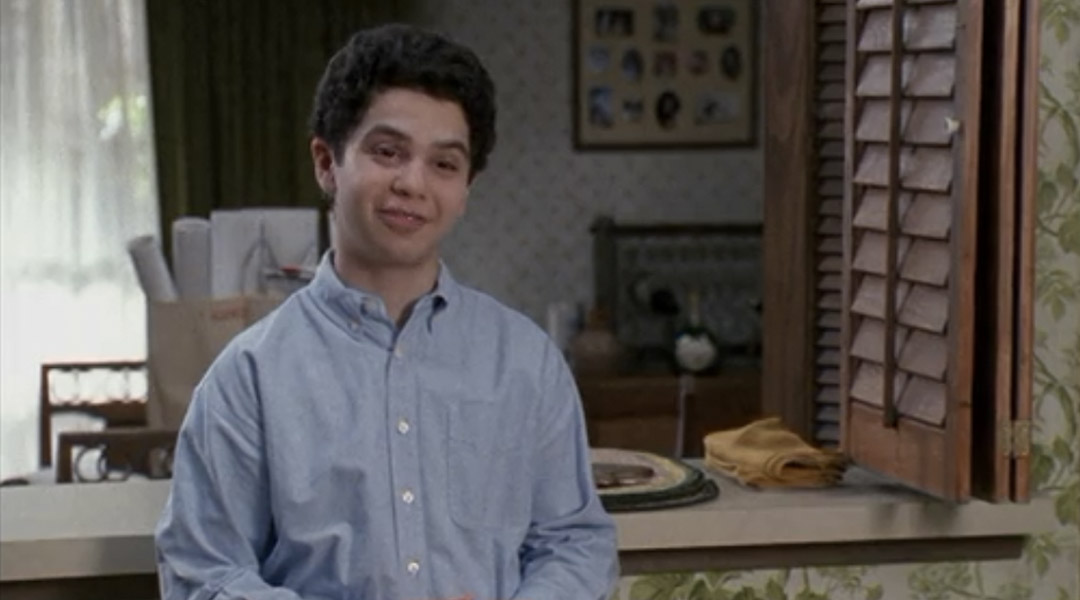 Sam: You really think Cindy likes me?
Bill: Hello. The jacket.
Neal (Samm Levine): No way. We’re not her species.
Sam: Listen, just do me a favor. Ask around, see if she has a date for the dance.
Bill: Who should I ask?
Neal: Okay. The dance is tomorrow. She’s a cheerleader. You’ve seen Star Wars 27 times. You do the math.

Bill: You’re in love with Lindsay.
Neal: I am not! What are you talking about?
Bill: Why are you getting so mad?
Neal: I’m not!
Why would you say that?
Bill: Because you have your book in front of your pants.
Neal: Shut up! Jerk.

Student: Nah, Neal. No. You wouldn’t want to trade places with me. Believe me.
Neal: I don’t know, I mean I’m Jewish. That’s no cakewalk either. I was elected school treasurer last year. I didn’t even run.

Neal: Sometimes it helps to talk to someone.
Lindsay: I’m too drunk to talk!
Neal: No, that’s okay. I speak drunk.

Neal: This is ridiculous. I look like Tom Selleck.

Neal: I can’t believe the Hot Dog-On-A-Stick girls saw us. That’s months of work down the drain!
Sam: Like they’d ever go out with you.
Neal: Hey, shut up! They like me. They always give me free lemonade refills.

Neal: A defaced locker, a humiliated freshman. And the busty succubus from Hell. Perhaps we’ve left McKinley High. And entered the chilling corridors of The Twilight Zone.

Karen: You want to fight me? Huh? Is that what you want? You want to mix it up a little bit? {Bill moans.} What was that, Bilbo Baggins?
Neal: I didn’t say anything. It was him.
Karen: Are you guys deformed or something? I mean, what’s the deal? Look, I guess I’m just gonna have to mark that locker again. This time in geek blood.

Neal: However I don’t know too many adults who still play with their Tonka Trucks.
Sam: I don’t play with Tonka Trucks.
Neal: You wanna go on the record with that statement?

Bill: What the hell is that?
Neal: You think she’s single?
Bill: Looks like it’s from outer space.
Sam: Shut up.
Coach Fredricks: Weir! Do you have something to say?
Sam: No, sir.
Coach Fredricks: When you get the clap because you weren’t paying attention in health class is that going to be funny too?

Sam: Don’t you think it’s weird that they want us to, you know, get naked?
Neal: It’s not a burlesque show, Sam. They just want us to shower.

Alan: Hey Schweiber, you gonna show us your circumcision in the showers today?
Neal: Oh yeah, take a number.

Alan: You guys are losers and you always will be!
Neal: Then how come you’re the one riding home with no friends.

Neal: Had to bring the big rocket, didn’t you?
Bill: What? So I got a big rocket. What am I supposed to do, cut it in half?

Neal: She is beautiful.
Bill: I can’t believe she’s gonna hang out with us.
Neal: What if I’m asleep right now, and this is just a dream, and any moment Maureen and I are gonna make love.
Bill: Ew!
Sam: Then what are we doing here?
Bill: Maybe this is my nightmare.

Eli: Excuse me, is this seat taken?
Neal: It is by you, my good man.

Sam: Hey, why don’t we go ask Gordon to come with us.
Neal: But he smells.
Sam: Yeah, I know. But he’s really cool. Maybe he doesn’t even know he smells.
Bill: Are you gonna tell him?

Sam: Why does Cindy like him? He’s such a jerk. He’s not even nice to her.
Neal: Cheerleaders have to date athletes. It’s the law.

Neal: Sam, hand me the head of that Norseman.

Neal: Wait. All the teachers numbers are there?
Bill: Phone.
Sam: Think we could be arrested for making prank calls?
Neal: Yeah. And we’ll get sent to telephone prison.

Neal: I hate being in school after it’s out. Makes me feel like a janitor.

Sam: What’s so great about him anyway?
Neal: It’s the hair.

Harris: It’s an interesting look, Sam.
Neal: Nah. Your hair’s not long enough to pull that off.
Bill: I think it looks weird. Like you’re trying to be all fancy.
Gordon: I don’t think you should worry about how you look, Sam. My mom always says you should be happy with what the good Lord gave you.
Bill: Yeah, well the good Lord gave you a lot, Gordon.
Sam: Bill!
Gordon: My whole family’s big-boned. It’s genetic.
Harris: Besides, the world loves jolly fat guys. Burl Ives. Jackie Gleason.
Gordon: Santa Claus. Curly. Raymond Burr.
Neal: No. Raymond Burr isn’t jolly.
Gordon: Well he was extremely nice to me at last year’s auto show.

Neal: You look like your mother dresses you.
Sam: Hey. Well, at least I don’t look like a ventriloquist’s dummy.
Neal: Don’t kill the messenger. I know I look good.

Neal: Why did you buy that?
Sam: Hey, you’re the one that said I should dress better.
Neal: Yeah, I didn’t say you should dress like Evel Knievel.

Neal: If this was your dad, you wouldn’t be in such a hurry to get home. I’d be there for you.

Neal: Sam, could you not use the word “die” in a hospital?
Sam: You asked if he was still alive.
Neal: Tht’s an optimist question. Alive is good. Dying is bad. Trust me on this, my dad’s a dentist.

Bill: Sam, don’t worry. It’s just a game. I mean, I’m good at Mouse Trap, and you’re really good at Kerplunk.
Sam: No. No no no, it’s not that. It’s just this thing with Cindy. She’s kind of, she’s kind of boring.
Bill: Really?
Sam: It’s weird hanging out with her friends. And, I mean, all she ever wants to do is make out and stuff.
Neal: I’d kill to be that bored.

Neal: Does his mom know you?
Bill: I don’t know. I never met her.