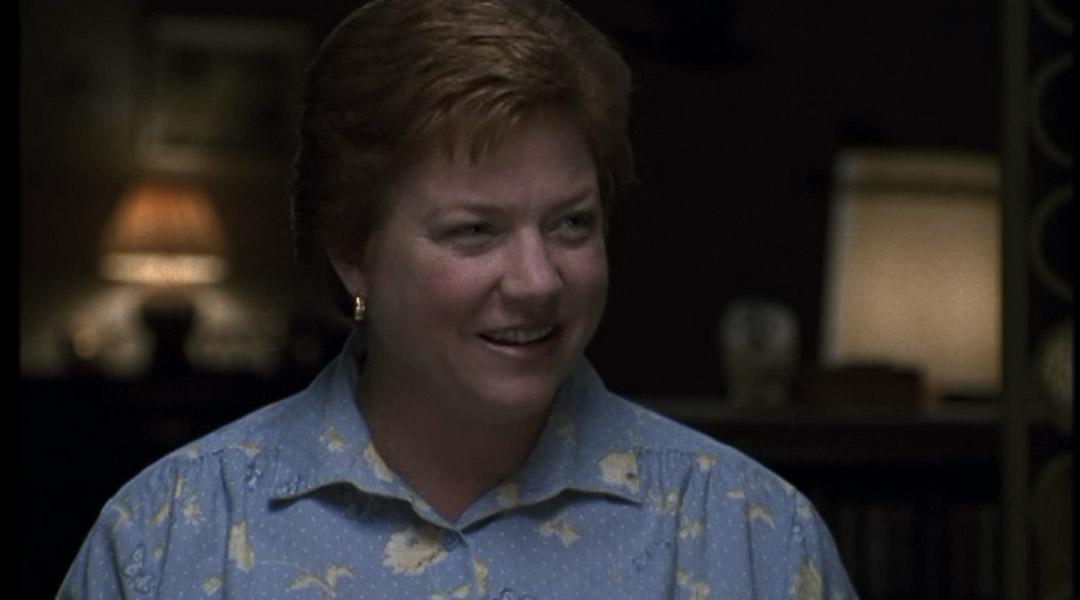 Jean Weir (Becky Ann Baker): You know, I ran into Mrs. Patten today at Farmer Jack. And she said that she saw you smoking.
Lindsay: Well she’s crazy. Mom, I can’t believe you. You seriously think I would start smoking?
Harold Weir (Joe Flaherty): You know, I had a friend that used to smoke. You know what he’s doing now? He’s dead!

Sam: Hey Dad, guess what? They’re showing Monty Python and the Holy Grail at the Parkway Saturday night. Neal, Bill and I are gonna watch it twice in a row.
Mrs. Weir: Sam, isn’t the Homecoming Dance Saturday night?
Sam: Yeah.
Mrs. Weir: Are you going?
Sam: No. Why would I do that?
Mrs. Weir: Well your sister’s going.
Lindsay: No I’m not.
Mrs. Weir: Alright, kids. HIgh school is for learning but it’s also where you should be learning to socialize. That’s what high school dances are all about.
Lindsay: No they’re not. It’s a chance for popular kids to experiment with sex in their cars.
Mrs. Weir: Lindsay!
Mr. Weir: Hey!
Lindsay: I mean, if that’s what you want me to do then I’d be happy to go.

Mr. Weir: You know who used to cut class? Jimi Hendrix. You know what happened to him? He died! Choking on his own vomit.
Lindsay: Daddy, I skipped Latin.
Mr. Weir: Oh. Well I can understand why you wouldn’t want to learn about that. It’s only the building block of our language.
Mrs. Weir: Well I’m just glad your Grandmother wasn’t alive to hear about this.

Mr. Weir: Honey, the boy’s fourteen. Huh? He can miss a night of walking around, begging like a tramp. Halloween’s for little kids anyway.
Mrs. Weir: Hey Lindsay, you’re still going to hand out candy with me, aren’t you? Remember how much fun we had last year, looking at all the little kids in their costumes?
Lindsay: Yeah, Mom. I told you I was going to.
Mrs. Weir: Good! ‘Cause we’re going to have a really good time this year. I promise.

Mrs. Weir: Sam, I laid your robot costume out on your bed.
Sam: You didn’t rip it, did you?
Mrs. Weir: No. But I wrote “My son’s the cutest boy in the whole world” on the front of it. Lindsay, I got you a costume. Go put it on, Sweetie! I’m gonna put these cookies by the door. We are going to have so much fun!
Sam: I kinda hate when mom gets goofy like that.

Angry Parent: Hey! What’s the big idea scaring my kids?
Mr. Weir: I didn’t mean to, I—
Mrs. Weir: I’m sorry. I made him put this on. Here, give these to your children. They’re homemade.
Angry Parent: Are you crazy? I’ve been lecturing my kids for weeks not to take unwrapped candy. Those cookies could have razorblades or pins in them.
Mrs. Weir: I wouldn’t do that.

Mrs. Weir: The world is such a different place then the one I grew up in. Everything just seems so much meaner these days.
Lindsay: Mom, kids didn’t throw eggs when you were in school?
Mrs. Weir: I don’t know. I guess so. I just know I never did.

Mrs. Weir: Honey, you can not force these kids to spend time with us.
Mr. Weir: Did you know that in some cultures if children shame you, you’re allowed to have them executed. Well I feel shamed.
Mrs. Weir: Harold.
Mr. Weir: Well I’m not swinging an axe, I just want them to play Pit with me. Is that so horrible?

Mrs. Weir: Didn’t you talk to Nick this morning?
Lindsay: Why? What’d you say to him?
Mrs. Weir: Well I was just trying to be nice and, uh…
Lindsay: Mom, did you just break up with my boyfriend?

Mr. Weir: I mean what’s it say about Kim Kelly?
Mrs. Weir: Nothing. Just that she thinks Kim Kelly has some….
Mr. Weir: What?
Mrs. Weir: Well, a different word for courage.
Mr. Weir: Huh? Oh! Well does it say anything about drugs? Pot? Acid?
Mrs. Weir: I don’t think so.
Mr. Weir: What does it say?
Mrs. Weir: “I’m sick of living in this claustrophobic suburban world—
Mr. Weir: Oh, get used to it.
Mrs. Weir: “—where everyone is trying to fit in. I feel like I lived in a world of scared robots. Obviously this is terrible, but two of the worst ones are mom and dad.”
Mr. Weir: What? What do that mean?
Mrs. Weir: “They are the most boring, repressed people on the face of the entire earth.”
Mr. Weir: Repressed? I’ll repress her.
Mrs. Weir: They say they love each other but who knows. It’s probably just part of their routine. Anyway, can robots really be in love?” Harold I don’t think we should be reading this.
Mr. Weir: Yeah yeah. Keep reading.
Mrs. Weir: Let’s see. “Their whole life is this monotonous routine. She cooks dinner—practically the same meal every night. He comes home barking at everyone like a fascist dictator, scared his…” Hm.
Mr. Weir: What?
Mrs. Weir: “…scared his penis will fall off if he ever helped clear the table. And she lets him walk all over her. I love them but it’s not the life for me. No thank you.”

Mrs. Weir: So I hear something very exciting is happening this week at school.
Cindy: That’s right. Vice President George Herbert Walker Bush is coming to our school to speak at an assembly in the cafeteria.