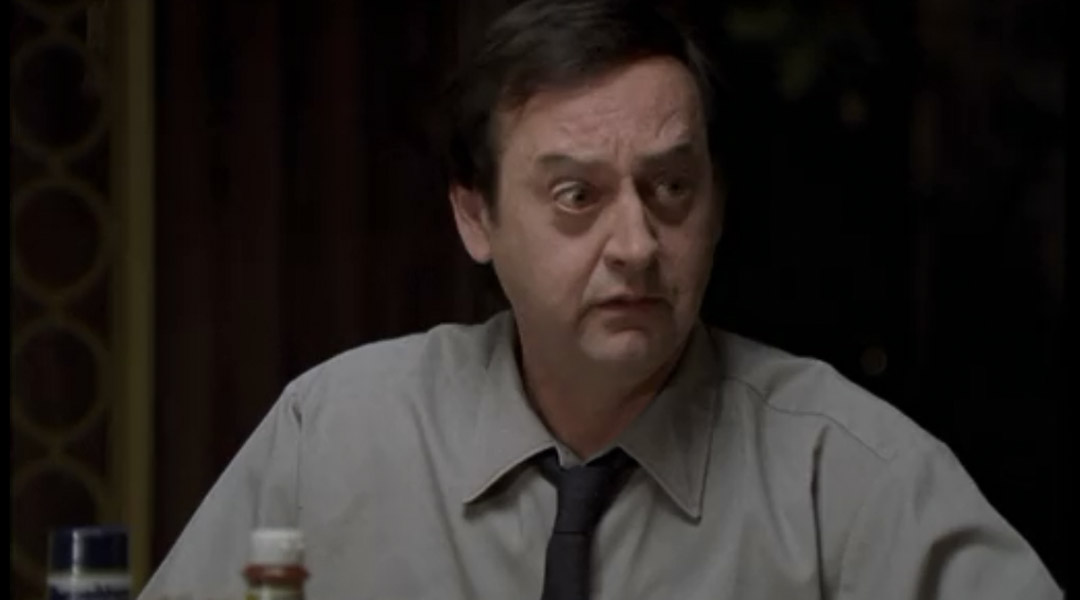 Jean Weir (Becky Ann Baker): You know, I ran into Mrs. Patten today at Farmer Jack. And she said that she saw you smoking.
Lindsay: Well she’s crazy. Mom, I can’t believe you. You seriously think I would start smoking?
Harold Weir (Joe Flaherty): You know, I had a friend that used to smoke. You know what he’s doing now? He’s dead!
Lindsay: Daddy, if I started smoking I would tell you.
Mr. Weir: Oh. Good. Now I don’t have to worry.

Mrs. Weir: Alright, kids. HIgh school is for learning but it’s also where you should be learning to socialize. That’s what high school dances are all about.
Lindsay: No they’re not. It’s a chance for popular kids to experiment with sex in their cars.
Mrs. Weir: Lindsay!
Mr. Weir: Hey!
Lindsay: I mean, if that’s what you want me to do then I’d be happy to go.
Mr. Weir: You know, there was a girl in our school, she had premarital sex. You know what she did on graduation day? Died! Of an overdose. Heroin.

Mr. Weir: You know who used to cut class? Jimi Hendrix. You know what happened to him? He died! Choking on his own vomit.
Lindsay: Daddy, I skipped Latin.
Mr. Weir: Oh. Well I can understand why you wouldn’t want to learn about that. It’s only the building block of our language.
Mrs. Weir: Well I’m just glad your Grandmother wasn’t alive to hear about this.
Mr. Weir: You can’t cut corners in life! You know who cut corners? Kennedy! Kennedy cut corners when he was running the Bay of Pigs. A lot of good men lost their lives because of it. You know who else cut corners? Janis Joplin.
Lindsay: Dad! What are you talking about?! You don’t make any sense. I just cut class and guess what? Everybody’s still alive. Just leave me alone!

Mr. Weir (Joe Flaherty): You know those Sex Pistols? They spit on their audience.
Mrs. Weir: Oh, that’s terrible.
Mr. Weir: Yep, that’s what I want to do. Spend my hard-earned money to be spit on. Now that’s entertainment.
Lindsay: Oh come on, Dad. Every generation is afraid of the music that comes from the next. I’m sure your parents hated Elvis.
Mr. Weir: Elvis didn’t expectorate on his fans.
Sam: No. But he died on the toilet.
Mr. Weir: Well, that’s paradise compared to where those Sex Pistols are gonna end up.

Mr. Weir: Honey, the boy’s fourteen. Huh? He can miss a night of walking around, begging like a tramp. Halloween’s for little kids anyway.
Mrs. Weir: Hey Lindsay, you’re still going to hand out candy with me, aren’t you? Remember how much fun we had last year, looking at all the little kids in their costumes?
Lindsay: Yeah, Mom. I told you I was going to.
Mrs. Weir: Good! ‘Cause we’re going to have a really good time this year. I promise.

Mr. Weir: Sam, what are you doing? You’re too old to go out trick or treating.
Mrs. Weir: Oh, Harold. Stop.
Mr. Weir: Well it’s true. There was this kid in my neighborhood growing up, Scott Byron. He kept on trick or treating until he was well into his 20s. You know where he’s living now? At home! With his ninety-year-old mother. He’s the laughingstock of the community. Never took a wife either.

Mr. Weir: What the hell are you supposed to be?
Harris: I’m a guy with a knife through his head.
Mr. Weir: Oh. Well. Mission accomplished.

Mr. Weir: Well. Certainly glad we all decided to celebrate Halloween. Last time I had this much fun I was pinned down in a foxhole by the North Koreans.

Mr. Weir: What is it, Sam? Is he going to blow up? That’s a perfectly good piece of veal wasted.

Kim: I’m not going to talk to him again. Ever! So you can all just bite me!
Mr. Weir: If she’s planning on sleeping over, she can just forget about it.

Mr. Weir: She’s hanging with the wrong crowd. They’re lying and cheating and next thing you know she’s Patty Hearst and she’s got a gun to our heads!

Mr. Kowchevski: I have the algebra test that Daniel took. If he can do the first problem, I will not only get down on my hands and knees and beg everyone in this room for forgiveness, but I’ll quit. I will resign. I will never teach again.
Mr. Weir: That’d be a start.

Mr. Weir: I was visiting Mr. Pries at his store today, and he was selling a game that my family and I used to play as a kid. every Friday night. Pit.
Lindsay: Pit?
Mr. Weir: Pit.
Sam: Sounds like fun.
Mr. Weir: It is. It’s a stock trading game. See, we all yell across the table at each other and try to get the other players to trade stocks with us.
Lindsay: So we all sit around the table and you yell at us?
Sam: You do that to us every night.

Mrs. Weir: Honey, you can not force these kids to spend time with us.
Mr. Weir: Did you know that in some cultures if children shame you, you’re allowed to have them executed. Well I feel shamed.
Mrs. Weir: Harold.
Mr. Weir: Well I’m not swinging an axe, I just want them to play Pit with me. Is that so horrible?

Mr. Weir: Alright, thanks Mike. Oh and good luck with that bomb shelter.

Mr. Weir: I’m a member of the Rotary, you know. And the masons. And councilman Applebee just last week asked me to run for the school board.
Lindsay: That’s great Dad.
Mr. Weir: I could be the mayor and I wouldn’t get any respect around this house.

Sam: Hey Dad, I think Cindy Sanders likes me.
Mr. Weir: Oh yeah?
Sam: Yeah. I got to form a human pyramid on top of her.
Mr. Weir: Well. That’ll do it.

Mr. Weir: This? The thumb. Do you think I don’t know what that means. I know, Lindsay. It means, “Hey, stranger, please lock me in your car. Drive me to god-knows-where and murder me.”

Mr. Weir: I mean what’s it say about Kim Kelly?
Mrs. Weir: Nothing. Just that she thinks Kim Kelly has some….
Mr. Weir: What?
Mrs. Weir: Well, a different word for courage.
Mr. Weir: Huh? Oh! Well does it say anything about drugs? Pot? Acid?
Mrs. Weir: I don’t think so.
Mr. Weir: What does it say?
Mrs. Weir: “I’m sick of living in this claustrophobic suburban world—
Mr. Weir: Oh, get used to it.
Mrs. Weir: “—where everyone is trying to fit in. I feel like I lived in a world of scared robots. Obviously this is terrible, but two of the worst ones are mom and dad.”
Mr. Weir: What? What do that mean?
Mrs. Weir: “They are the most boring, repressed people on the face of the entire earth.”
Mr. Weir: Repressed? I’ll repress her.
Mrs. Weir: They say they love each other but who knows. It’s probably just part of their routine. Anyway, can robots really be in love?” Harold I don’t think we should be reading this.
Mr. Weir: Yeah yeah. Keep reading.
Mrs. Weir: Let’s see. “Their whole life is this monotonous routine. She cooks dinner—practically the same meal every night. He comes home barking at everyone like a fascist dictator, scared his…” Hm.
Mr. Weir: What?
Mrs. Weir: “…scared his penis will fall off if he ever helped clear the table. And she lets him walk all over her. I love them but it’s not the life for me. No thank you.”

Mr. Weir: Sure Lindsay. You can see The Who. And you can go see The Stones at Altamont.

Mr. Weir: Alright, fine. Just keep those boys away from your accordion.

Mrs. Weir: Harold, we have to go. Or the Schweibers will be offended. We missed it last year.
Mr. Weir: It’s the same party year after year. It’s smarmy. What kind of doctor invites his patients over to listen to his dental jokes? It’s sick.
Mrs. Weir: Honey, we have to go.
Lindsay: I don’t have to go, do I?
Mr. Weir: I don’t see why you should get out of it. He’s your dentist too.
Lindsay: Fine. I’ll switch dentists.
Mr. Weir: Say, that’s an idea.

Mr. Weir  handing the keys over: All right, I’m giving you these now. There’s no way I’m going to spend all night listening to the same old dentist jokes without plenty of anesthesia.

Mr. Weir: Nick’s father is a hard man. My old man was the same way.
Lindsay: Yeah, I know the feeling.
Mr. Weir pointedly: Lindsay, trust me. You don’t.

Harold Weir: You know, everyone’s a Democrat until they get a little money. Then they come to their senses.

Mr. Weir: You’re not lying, are you, Sam?
Sam: No.
Mr. Weir: ‘Cause you know what happens to liars in this world, don’t you?
Sam: They end up getting killed in jail.
Mr. Weir: Right.