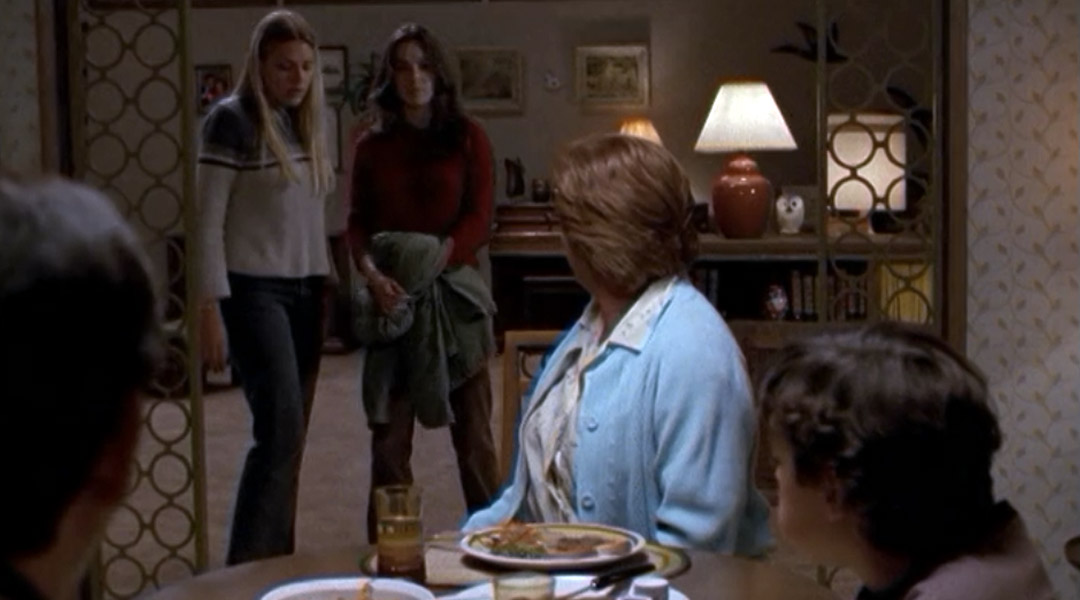 Millie Kentner: Hey! Those are for my French class.
Daniel: But I love sprinkles!
Millie: Fine just eat it.

Karen Scarfolli (Rashida Jones): What are you doing? That’s my locker.
Sam: Oh. I’m sorry. I didn’t know. I thought it was mine. See, this is mine. I just got hit in the solar plexus so I’m a little out of it.
Karen: Yeah, I don’t want to hear your life story, okay? I want you to move your ass.

Karen: This your locker? {she writes GEEK across it in lipstick.} There. Now you’ll always know which one’s yours and which one’s mine. Okay, geek?

Bill: You don’t have hair in your pits?

Nick: You gonna sit over here now?
Lindsay: I just don’t feel like being abused today. I mean, I give up, you know? I go out of my way to be nice to her but it’s like—argh—no matter what I do, you know?

Neal: A defaced locker, a humiliated freshman. And the busty succubus from Hell. Perhaps we’ve left McKinley High. And entered the chilling corridors of The Twilight Zone.
It’s not funny.

Karen: Hey! What happened to my artwork? I spent a lot of time on that.
Sam: I… I washed it off.
Karen: Yeah? Well how’re you going to remember where your locker is?
Sam: I’ll remember!
Karen: No you won’t.
Sam: Listen, I don’t want to have to fight you.
Karen: You want to fight me? Huh? Is that what you want? You want to mix it up a little bit? {Bill moans.} What was that, Bilbo Baggins?
Neal: I didn’t say anything. It was him.
Karen: Are you guys deformed or something? I mean, what’s the deal? Look, I guess I’m just gonna have to mark that locker again. This time in geek blood.

Sam: Why are you friends with Kim Kelly?
Lindsay: Don’t talk to me, okay.
Sam: Kim Kelly’s my enemy.
Lindsay: Look, if you’re going to start being a tattletale and trying to get me into trouble then maybe you should go to a different high school. I don’t need some spy reporting on my every move.
Sam: I just don’t know why you have to hang around her.
Lindsay: Why not?
Sam: Well because she and her friends are mean to me. They wrote geek on my locker.
Lindsay: Well maybe you are a geek. I’m just kidding.

Kim: My aunt Kathy was so rad. She lived in LA. She was on Kojak. She doinked Ryan O’Neal once at a party.
Lindsay: Wow. She sounds awesome.
Kim: Yeah well she’s dead. She OD’ed on coke.

Kim: So you see there’s a lot riding on this dinner. I can’t lose my car. Do you get it?
Lindsay: I don’t know if I do.

Neal: However I don’t know too many adults who still play with their Tonka Trucks.
Sam: I don’t play with Tonka Trucks.
Neal: You wanna go on the record with that statement?

Kim: My life sucks!
Lindsay: No it doesn’t.
Kim: My parents hate me, I don’t have any friends. You’re like my only friend, Lindsay. You’re a total loser. No offense.

Mr. Weir: What is it, Sam? Is he going to blow up? That’s a perfectly good piece of veal wasted.

Lindsay: I’m not going to talk to him again. Ever! So you can all just bite me!
Mr. Weir: If she’s planning on sleeping over, she can just forget about it.

Karen: Hey, he hit on me.
Kim: Oh yeah? Well after school I’m gonna hit on you.

Sam: Hey, thanks Kim. That was really cool.
Kim: No problem, geek.