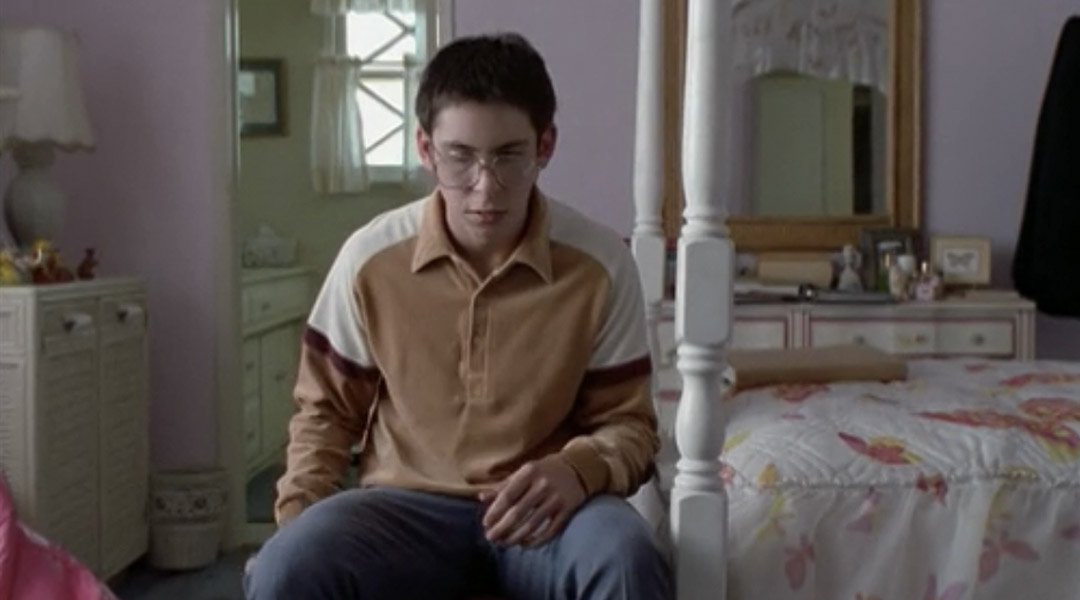 Sam: Why does my mom always put a note in my lunch? It’s so embarassing.
Bill Haverchuck (Martin Starr): At least your mom doesn’t write the note on the bag.

Sam: Are you guys going to the Homecoming Dance?
Neal Schweiber (Samm Levine): Mmm, no.
Bill: I really don’t see that happening.

Sam: You really think Cindy likes me?
Bill: Hello? The jacket.
Neal: No way. We’re not her species.
Sam: Listen, just do me a favor. Ask around, see if she has a date for the dance.
Bill: Who should I ask?

Bill: These shorts aren’t exactly flattering, are they?
Sam: No. You look good.

Alan: You’re dead, Weird!
Bill: Alan?
Alan: What?
Bill: What’s the point of all this?
Alan: Point? The point is you’re dead too! Little Man.
Bill: I kind of wish I didn’t come to school today.

Bill: Dodgeball’s kind of a stupid game, isn’t it.

Alan: What are you losers doing on my street?
Neal: Nothing.
Bill: We’re kind of here to beat you up.
Neal: Bill!
Bill: Well we are.

Bill: You’re in love with Lindsay.
Neal: I am not! What are you talking about?
Bill: Why are you getting so mad?
Neal: I’m not!
Why would you say that?
Bill: Because you have your book in front of your pants.
Neal: Shut up! Jerk.

Sam: Why did Neal invite her? Now she’s going to see all the dumb stuff in my house.
Bill: His plan is to distract you so he can hit on your sister.
Sam: Oh man! I’m so dead. What am I going to say to Cindy?
Bill: Don’t say anything.
Be dominant. It’s all— all about dominance. I saw this monkey show on PBS, you talk to her first it’s a sign of weakness. And she will not pick you to be her mate?
Sam: Are you drunk?
Bill: I think so. Yes I am.
Sam: Oh man! Go into my room, lock the door, and don’t drink anymore.
Bill: That’s very dominant.

Bill: Nothing from the garage.
Neal: Okay.
Bill: And it has to be food. Okay?
Nothing from under the sink. No cleansers, no detergent, no furniture polish. And no cut-up bits of sponge.
Sam: Okay.
Bill: I’m just trying to to win ten bucks here. I don’t wanna die.

Bill: If I were the Bionic Woman, what would I wear?

Bill as the Bionic Woman: I’m sorry Steve Austin. I can’t marry you. I’m mad at you right now. On the phone: What? I’m sorry I can’t hear you. Hold on I’m gonna put the phone on my bionic ear. That’s, that’s better. No, don’t talk so loud! Don’t forget I’ve got bionic hearing. About the fake breasts: No! These are not bionic! These are all me!

Bill as the Bionic Woman: Oscar Goldman! It’s me, Jamie Summers. Steve Austin is trapped in the, in the reactor— Hi. Mom. Okay, you can use the phone.

Bill: I just hope I get some candy I can eat. Yeah, I’m allergic to peanuts, licorice and nougats.
Neal: How can you possibly be allergic to nougat?
Bill: I don’t know. My doctor says I’m allergic to more things than anyone he’s ever seen.

Bill: Ma’am, I hope there aren’t any peanuts in those peanuts. ‘Cause if there are, I could die.

Bill: You don’t have hair in your pits?

Bill: What the hell is that?
Neal: You think she’s single?
Bill: Looks like it’s from outer space.

Sam about Bill’s black socks: You look a little bit like my grandpa.
Bill: Oh yeah? Is your grandpa super cool?

Bill: This push-up’s too hard to push up.

Neal: Had to bring the big rocket, didn’t you?
Bill: What? So I got a big rocket. What am I supposed to do, cut it in half?

Neal: She is beautiful.
Bill: I can’t believe she’s gonna hang out with us.
Neal: What if I’m asleep right now, and this is just a dream, and any moment Maureen and I are gonna make love.
Bill: Ew!
Sam: Then what are we doing here?
Bill: Maybe this is my nightmare.

Maureen: God, Bill, your rocket’s huge.
Bill: Oh it is? I hadn’t noticed.

Neal: Man. Gordon reeks. You think he ever takes a shower?
Sam: Maybe he takes baths instead. My mom says that they don’t really get you clean.
Bill: Yeah. You just sit in your own filth.

Sam: Cindy is not abnormal.
Bill: Yeah? She cut the cheese.
Neal: Oh my god.
Sam: That’s not funny.
Bill: I heard it, man, I swear. She blamed it on the chair. But she cut the cheese.
Sam: Well some chairs make weird noises. What kind of a chair was it?
Bill: I don’t know. Vinyl?
Sam: Vinyl chairs always squeak.
Bill: It wasn’t a squeak. It was the sound of cheese being cut.

Sam: Hey Cindy. How’s it going?
Cindy: Not good. Our mascot broke his arm and he got a concussion too. And now his mom won’t let go to bed tonight ’cause she’s afraid he’s gonna slip into a coma.
Bill: My cousin slipped into a coma once. And then when he woke up he spoke fluent Spanish.

Sam: Think there’s a subliminal message in there somewhere?
Bill: For your sake, I hope not.

Coach Fredricks: Hello?
Bill: Um, hello? Coach Fredricks?
Coach Fredricks: Yep.
Bill: This is Mr. Crisp, Gordon Crisp’s father.
Coach Fredricks: Mr. Crisp? Uh, how are you?
Bill: Not good. I wanna give you a piece of my mind. I think it’s very unfair the way you’ve been running baseball in gym class. You always let the jock kids run the game. Now some kids, like Gordon—my son—never, never get a chance. ‘Cause you guys think he’s not very good. For example he may want to play shortstop. But, you know, you never give him a shot.
Coach Fredricks: Look, I’m sorry but, um, you know, I always assumed Gordon didn’t have any interest in sports. You know what I’m saying?
Bill: Well he does. Don’t judge a book by its cover.
Coach Fredricks: I apologize. Alright, I’ll rectify this situation immediately.
Bill: Okay then. Thank you very much. Goodbye now.
Coach Fredricks: Alright, bye.

Neal: Why did you buy that?
Sam: Hey, you’re the one that said I should dress better.
Neal: Yeah, I didn’t say you should dress like Evel Knievel.
Bill: You guys, I think we’re directing more attention to us by doing this.
Gordon: This is cool. I feel like I’m in the secret service.

Sam: I’m not going to hug you!
Bill: Why? I’m quite secure with my manliness. It’s okay to hug friends.

Miss Foote: You know Bill, you’re not a geek.
Bill: Tell that to the rest of the world.

Bill: Sam, don’t worry. It’s just a game. I mean, I’m good at Mouse Trap, and you’re really good at Kerplunk.
Sam: No. No no no, it’s not that. It’s just this thing with Cindy. She’s kind of, she’s kind of boring.
Bill: Really?
Sam: It’s weird hanging out with her friends. And, I mean, all she ever wants to do is make out and stuff.
Neal: I’d kill to be that bored.

Daniel: All right, fine, I’ll be a dwarf, but my name is Carlos.
Bill: Carlos the Dwarf?
Daniel: Yeah, you got a problem with that, Gorthon?

Neal: Does his mom know you?
Bill: I don’t know. I never met her.