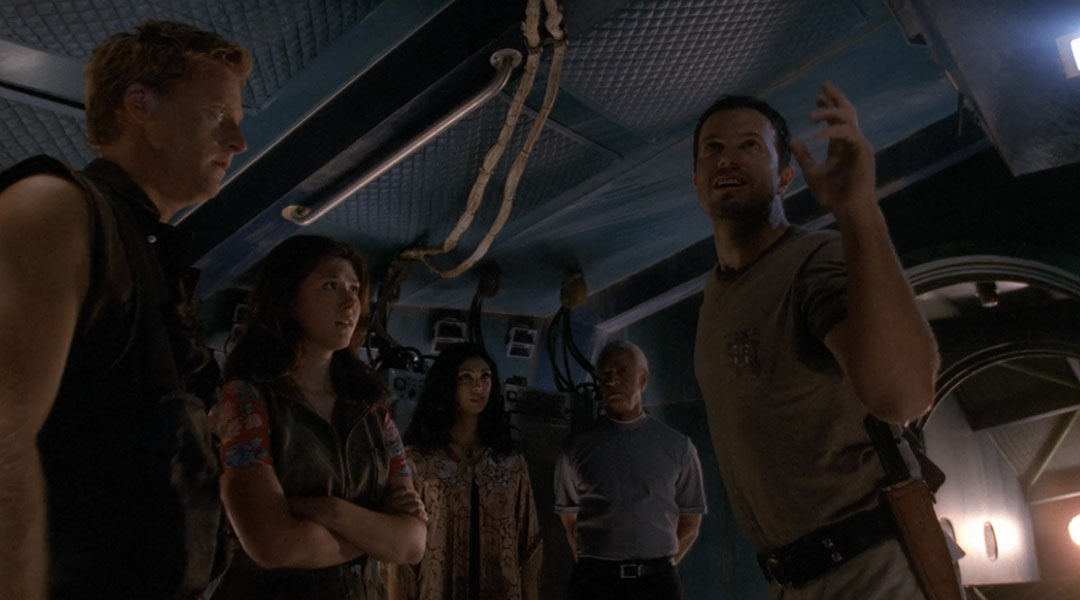 Jayne: Your move.
Zoe: That’s a bold move.
Mal: I live on the edge.
Jayne: Nice work, dumbass.
Mal: I’ve given some thought to moving off the edge. Not an ideal location. Could get a place in the middle.

Lund: A toast! Quiet! Shut up! I’m ah, I got words. I’m saying. This is an auspicious day. We all know what day it is.
Jayne: What’s auspicious? What day is it?
Lund: A glorious day for all the proud members of the allied planets. Unification Day! The end of the scumbag independence, the dawn of a new galaxy. {Mal gets up.}
Zoe: Captain.
Mal: Just feel the need for another drink.
Jayne: What month is it?

Lund: Hey! You gonna drink to the Alliance with me? Six years ago today, the Alliance sent the Browncoats runnin’, pissing their pants. You know, your coat is kind of a brownish color.
Mal: It was on sale.
Lund: You didn’t toast. You know, I’m thinking you one of them Independents.
Mal: And I’m thinking you weren’t burdened with an overabundance of schooling. So why don’t we just ignore each other ’til we go away.
Lund: The Independence were a bunch of cowardly, inbred piss-pots. Should have been killed off of every world that’s spinnin’.
Mal: Say that to my face.
Lund: I said, you’re a coward and a piss-pot. Now what are ya gonna do about it?
Mal: Nothing. I just wanted you to face me so she could get behind you. Zoe hits him from behind

Mal: Wash. We’ve got some local color happening. A grand entrance would not go amiss.

Mal: This is why we lost, you know. Superior numbers.
Zoe: Thanks for the reenactment, sir.

Kaylee: So. What happened? Was there a terrible brawl?
Zoe: Oddly enough, there was.
Wash: Are you getting my wife into trouble?
Mal: Wha- ? I didn’t start it! Just wanted a quiet drink.
Zoe: Funny, sir, how you always seem to find yourself in an Alliance-friendly bar, come U-Day, lookin’ for a quiet drink.
Mal: See, this another tragic sign of your space dementia, all paranoid and crotchety. Breaks the heart.

Mal: Take us out of the world, Wash. We got us some crime to be done.

Simon: Need a weave on that?
Mal: It’s nothing.
Simon: I expect there’s someone’s face feels differently.
Mal: You know they tell ya, never hit a man with a closed fist. But it is on occasion hilarious.

Mal: If I’m your mission, Shepherd, best give it up. You’re welcome on my boat. God ain’t.

Inara: What did I say to you about barging into my shuttle?
Mal: That it was manly and impulsive?
Inara: Yes. Precisely. Only the exact phrase I used was, “Don’t.”
Mal: Well you’re holding my mechanic enthralled, and Kaylee, what the hell is going on in the engine room? Were there monkeys? Some terrifying space monkeys maybe got loose?

Adelai Niska (Michael Fairman): You do the train job for me. Then you are solid. No more gossip.
Mal: Right.
Niska: You do not like I kill this man?
Mal: Oh, no. I’m sure he was a very bad person.
Niska: My wife’s nephew. At dinner I am getting earful. There is no way out of that.

Niska: Anything goes wrong then your reputation only gossip and things between us not so solid. Yes?

Zoe: He’s a psycho, you know. Niska.
Mal: He’s not the first psycho to hire us. Nor the last. You think that’s a commentary on us?
Zoe: I just have an image in my head of a guy hanging from the ceiling.
Mal: I have an image of it not being me.

Book: So… how do you think it’s going?
Inara: The caper? Mal knows what he’s doing.
Book: How long have you known him?
Inara: I’ve been on this ship eight months now. I’m not certain I’ll ever know the captain.
Book: I’m surprised a respectable Companion would sail with this crew.
Inara: It’s not always this sort of work. They take the jobs they can get, even legitimate ones. The further you get away from the central planets, the harder things are.

Zoe: Sir, is there some information we might be lacking as to why there’s an entire Fed squad sitting on this train?
Mal: It doesn’t concern us.
Zoe: It kind of concerns me.
Mal: I mean they’re not protecting the goods. If they were, they wouldn’t be letting people past them.
Zoe: You don’t think that changes the situation a bit?
Mal: I surely do. It makes it more fun.
Zoe: Sir, I think you have a problem with your brain being missing.

Jayne: Time for some thrilling heroics.

Jayne: Niska’s people are waiting. They’re not partial to waiting.
Wash: Let ’em read a magazine. We don’t make the sale until Mal and Zoe are back on the boat.
Jayne: These are stone killers, little man. They ain’t cuddly like me.
Wash: I’m not flying anywhere without my wife.
Kaylee: She’ll be okay. She’s with the captain.
Jayne: There, you see? Everybody wins.

Jayne: You know what the chain of command is? It’s the chain I go get and beat you with ’til you understand who’s in ruttin’ command here. Now we’re finishing this deal. And then maybe—maybe—we’ll come back for those morons who got themselves caught. You can’t change that by gettin’ all… bendy.
Wash: All what?
Jayne: You got the light from the… console to keep you… lift you up… shine like— {starts grabbing at the air} little angels.
Wash: Did he just go crazy and fall asleep?
Simon: I told him to sit down.

Wash: What about Niska? Won’t this put him in more or less a killing mood?

Sheriff Bourne (Gregg Henry): You were truthful back in town. A man can get a job, he might not look too close at what that job is. But a man learns all the details of a situation like ours, well, then he has a choice.
Mal: I don’t believe he does.

Mal: Now this is all the money Niska gave us in advance. You bring it back to him, tell him the job didn’t work out. We’re not thieves. Well we are thieves. Point is, we’re not taking what’s his. Now we’ll stay out of his way best we can from here on in. You explain that’s best for everyone, okay?
Crow: Keep the money. Use it to by a funeral. It doesn’t matter where you go or how far you fly. I will hunt you down and the last thing you see will be my blade.
Mal: Darn. {he kicks him into the intake engine}

Mal: Now this is all the money Niska gave us in advance—
Oh yeah, I’m good. Best thing for everyone. I’m right there with you.