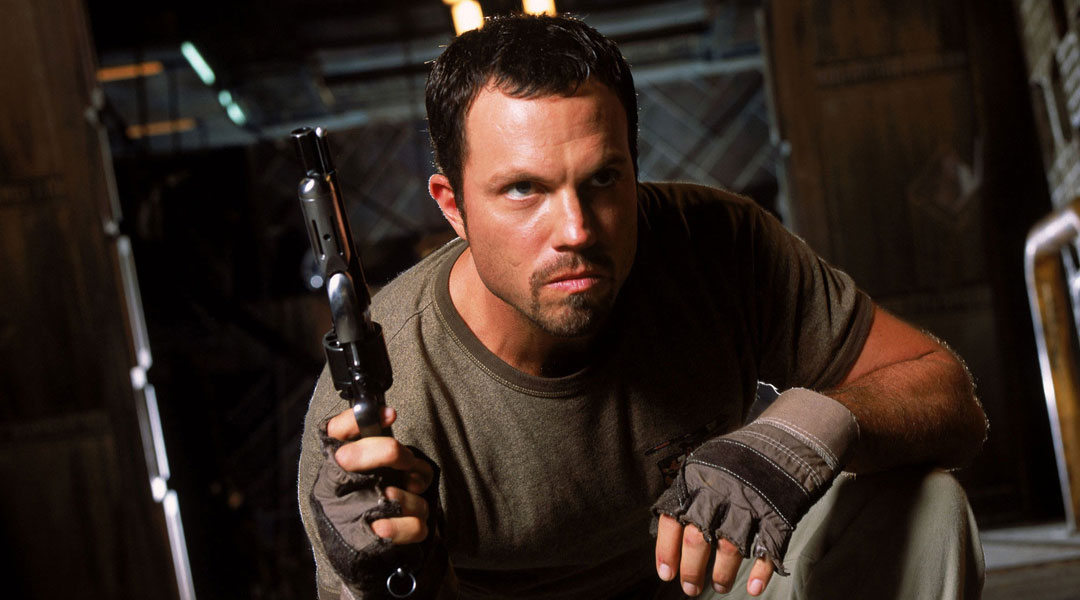 Jayne: Any one you walk away from, right? Long as we got the goods, I call this a win.
Mal: Right. We win.

Badger: Crime and politics, little girl. Th’ situation is always… fluid.
Jayne: Only fluid I see here is the puddle of piss refusing to pay us our wage.

Jayne Cobb: I don’t understand why we didn’t leave that little sumbitch in a pool of his own blood.
Mal: We’d be dead. Can’t get paid if you’re dead.
Jayne: Can’t get paid if you crawl away like a little bitty bug, neither. I got a share in this job. Ten percent of nothing is—let me do the math here. Nothing into nothin’. Carry the nothin’…

Kaylee: You seem so young to be a doctor.
Simon: Yeah. You’re pretty young to be a ship’s mechanic.
Kaylee: I know how. Machines just got workins’ and they talk to me.
Book: That’s a rare gift.
Kaylee: Well not like being a doctor. Helping fix people. That’s important.
Jayne: Little Kaylee here just wishes you was a gynecologist.

Jayne: Outta the way.
Book: You’re not killing this man.
Jayne: Not right away.

Mal: Now I gotta know how close the Alliance is—exactly how much you told them—before Wash scrambled your call. So. I’ve given Jayne here the job of finding out.
Jayne: He was non-specific as to how.
Mal: You only gotta scare him.
Jayne: Pain is scary.

Dobson: Okay, I can see you’re not an idiot.
Jayne: Wish I could say the same, Lawrence. But this is disappointing as hell.

Mal: I believe that woman’s planning to shoot me again.
Jayne: She meant to pay you, she’d have haggled you down some.
Wash: Just a little effort to hide it would have been—
Zoe: Sir, we don’t have to deal with her.
Mal: Yes we do.
Jayne: Here’s a little concept I’ve been working on. Why don’t we shoot her first?
Wash: It is her turn.

Mal: How come you didn’t turn on me, Jayne?
Jayne: Money wasn’t good enough.
Mal: What happens when it is?
Jayne: Well… that’ll be an interesting day.
Mal: I imagine it will.

Jayne: Time for some thrilling heroics.

Jayne: Niska’s people are waiting. They’re not partial to waiting.
Wash: Let ’em read a magazine. We don’t make the sale until Mal and Zoe are back on the boat.
Jayne: These are stone killers, little man. They ain’t cuddly like me.

Jayne: You know what the chain of command is? It’s the chain I go get and beat you with ’til you understand who’s in ruttin’ command here. Now we’re finishing this deal. And then maybe—maybe—we’ll come back for those morons who got themselves caught. You can’t change that by gettin’ all… bendy.
Wash: All what?
Jayne: You got the light from the… console to keep you… lift you up… shine like— {starts grabbing at the air} little angels.

Jayne: Tell you what I think, I figure that fella we run into did everyone on board. Killed em. Then he decided to take a swim, see how fast his blood could boil out of his ears.
Wash: You’re a very up person.

Badger: Nice to see someone from the old homestead.
River: Not really. Tell me if anyone interesting shows up. walks off
Badger: I like her.
Jayne: That there, exactly the kind of diversion we could’ve used.

Jayne reading Simon’s diary. Sort of:”Dear Diary, today I was pompous and my sister was crazy. Today we were kidnapped by hillfolk never to be seen again. It was the best day ever.”

Rustler: I think maybe you’ gonna give me a little one-on-one time with the missus.
Jayne: Well I think you might wanna reconsider that last part. See, I married me a powerful ugly creature.
Mal popping up from under the bonnet: How can you say that? How can you shame me in front of new people?
Jayne: If I could make you prettier I would.
Mal: You are not the man I met a year ago.

Jayne to Mal: You got a wife? How come I only got that dumbass stick ‘sounds like it’s raining?

Jayne to Book: One day you’re gonna tell us all how a preacher knows so damn much about crime.

Jayne: See, Vera? Dress yourself up you get taken somewhere fun.

Simon to Jayne: My god. You’re like a trained ape. Without the training.

Mal: Jayne?
Jayne: Yeah?
Mal: You wanna tell me why there’s a statue of you here lookin’ like I owe him something?
Jayne: Wishin’ I could, Captain.

Mal: Which one do you figure tracked us.
Zoe: The ugly one, sir.
Mal: nodding …Could you be more specific?

Mal: …Could have been meditating on the wonders of your rock garden right now.
Jayne: Beats just sitting.
Wash: It is just sitting.

Nurse: What have you got?
Mal: We got a couple of DOAs. By the time we got there—
Nurse disinterested: Take them down to the morgue.
Jayne : We applied the cortical electrodes but were unable to get a neural reaction from either patient.

Mal: You called the Feds.
Jayne: I got pinched!
Mal: Which is what happens when you call the Feds.

Jayne: What are you going to tell the others?
Mal: About what?
Jayne: About why I’m dead.
Mal: Hadn’t thought about it.
Jayne: Make something up. Don’t tell ’em what I did.

Simon: How much did they offer you to sell out me and River on Ariel?
Jayne: That’s crazy talk.
Simon: Then let’s talk crazy. How much?
Jayne: Anybody there. River pops in. Anybody else?

Jayne about his hat: How’s it sit? Pretty cunning, don’t you think?

Jayne: You really think there’s something in there?
Mal: Using corpses for smuggling is a time-honored repulsive custom.

Simon: She probably didn’t even know what was going on. Thought it was a game.
Jayne: Later on you can explain to me how that’s a comfort.

Mal: I find River pleasant enough myself. But she does have an oddness to her. And I ain’t just talkin’ about her proficiency with firearms. Girl knows things. Things she shouldn’t. Things she couldn’t.
Jayne: Are you, are you saying she’s a witch?
Wash: Yes Jayne. She’s a witch. She has had congress with the Beast.
Jayne: She’s in congress?

Jayne: If wishes were horses we’d all be eating steak.