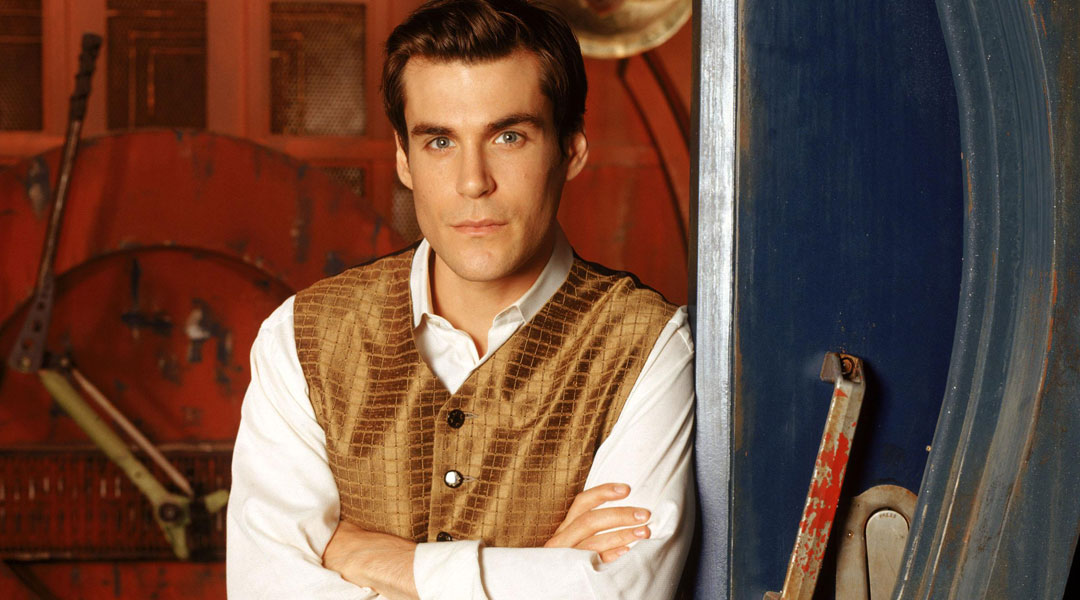 Simon about Jayne: What do you pay him for?
Mal: What?
Simon: I was just wondering what his job is. On the ship.
Mal: Public relations.

Mal: Forget your toothpaste?
Simon: Are you out of your mind?
Mal: Ah, just about. What’d you tell them?
Simon: Tell who?
Mal: I got exactly no time for games. What do they know?
Simon: You’re a lunatic.
Mal: And you’re a gorram fed.
Book: Hate to say it, Captain. But you’ve got the wrong man. {he indicates Dobson.}

Dobson: Simon Tam. You are bound by law to stand down. Simon raises his hands.
Mal: What? The doctor? Oh. lowering his hands. Hey. Is there, is there a reward?
Dobson: Get on the ground. Get on the ground!
Simon: Lawman, you are making a mistake.

Simon: How do you feel?
Kaylee: A little odd.
Simon: Be still.

Simon: The infirmary working?
Mal: Yeah, we got it stocked.
Wash on intercom: Captain, we’ve been hailed by a cruiser. Ordered to stay on course and dock for prisoner transfer.
Simon: Change course. Run.
Mal: Hell with you. You brought this down on us, I’m dumping you with the law.
Inara: Mal, I—
Simon: She’s dying.
Mal: You’re not gonna let her.
Simon: Yes. I am.
Mal: You can’t.

Simon: Do you know what a stomach wound does to a person?
Mal: I surely do.
Simon: Then you know how crucial the next few minutes are.
Zoe: You let her die, you’ll never make it to the feds.
Simon: She’ll still be dead.
Mal: You rich kids. You think your lives are the only thing that matters. What’d you do? Kill your folks for the family fortune?
Simon: I don’t kill people!
Mal: Then do your job!
Simon: Turn this ship around!
Inara: Enough! Mal, do it.
Mal: Don’t you ever tell me what to do on my— {Kaylee cries out in pain.} Zoe, change course.
Simon: Help me get her up.
Zoe: Wash, change course and go for hard burn. We’re runnin’.

Mal: When this is over you and me are gonna have a personal chat.
Simon: Won’t that be fun. Dope her.

Simon: I need to check her vitals.
Mal: Oh, is that what they call it?
Simon: She’s not supposed to wake up for another week. The shock—
Mal: The shock of what? Waking up, finding out she’d been sold to some border world Baron? Or… I’m sorry, was this one for you? Is it true love? Because you do seem a little—
River: Augh!

Mal: What the hell is this?
Simon: This is my sister.

Simon: There was a school. A government-sponsored academy. We had never even heard of it, but it had the most exciting program. The most challenging. We could have sent her anywhere, we had the money, but she wanted to go. She wanted to learn. She was fourteen…. I got a few letters at first and then I didn’t hear for months. Finally I got a letter that made no sense. She talked about things that never happened, jokes that, that we never…. It was a code. It just said… “They’re hurting us. Get me out.”

Simon: What about us?
Mal: Kaylee comes through, you and your sister get off at Whitefall.
Simon: If she doesn’t come through?
Mal: Then you’re getting off a mite sooner.

Simon: What business is that exactly? I’m a dead man, I can’t know? Is it gold? Drugs? Pirate treasure? What is it that makes you so afraid of the Alliance?
Mal: You don’t want to go down this road with me, boy.
Simon: Oh, you’re not afraid of them? Well I already know you’d sell me out to them for a pat on the head. Hell, you should probably be working for them. You certainly fit the profile— {Mal clocks him.}
Jayne: Saw that coming.

Simon: I’m trying to put this as delicately as I can. How do I know you won’t kill me in my sleep?
Mal: You don’t know me, son, so let me explain this to you once. If I ever kill you, you’ll be awake. You’ll be facing me. And you’ll be armed.
Simon: Are you always this sentimental?
Mal: Had a good day.

Simon: Need a weave on that?
Mal: It’s nothing.
Simon: I expect there’s someone’s face feels differently.
Mal: You know they tell ya, never hit a man with a closed fist. But it is on occasion hilarious.

Jayne: … Now we’re finishing this deal. And then maybe—maybe—we’ll come back for those morons who got themselves caught. You can’t change that by gettin’ all… bendy.
Wash: All what?
Jayne: You got the light from the… console to keep you… lift you up… shine like— {starts grabbing at the air} little angels.
Wash: Did he just go crazy and fall asleep?
Simon: I told him to sit down.

Jayne: Where do you think you’re headed?
Simon: Thought I’d offer my services. In case anyone on board required medical attention.

Simon: What’s going on? What are you doing?
Mal: I’m fixing to do some business. I can’t be herding these steers and your sister too.
Simon: She didn’t mean any harm.
Mal: Well I never figured she did. But when a man engages in clandestine dealings, he has his preference for things going smooth. She makes things not be smooth.
Simon: Right. I’m very sorry if she tipped off anyone about your carefully concealed cows.

Teacher: It’s the way of life in my findings that journeys end when and where they want to and that’s where you make your home.
Simon: This isn’t our home.
Teacher: If it isn’t here, where is it?

Mr. Tam: Have you completely lost your mind?
Simon: Pretty nearly.
Mr. Tam: We got the word at the [?]. I had to leave the dinner table
Simon: I’m sorry Dad. You know I would never have tried to save River’s life if I had known there was a dinner party at risk.

Simon: So finally a decent wound on this ship and I miss out.

Simon to Jayne: My god. You’re like a trained ape. Without the training.

Simon: I always thought the name “Serenity” had a vaguely funereal sound to it.

Mal: When I took you and you sister in, the deal was you keep her in check. You can’t hold up your end, we’re gonna have to revisit the deal…. She’s getting worse, isn’t she?
Simon: Yes.

Book: A government is a body of people usually—notably—ungoverned.
Simon: Now you’re sounding like the captain.

Mal: I know you all took up arms in that piece of action back there. How you faring with that, Doctor?
Simon: I don’t know. I never shot anyone before.
Book: I was there, son. I’m fair sure you haven’t shot anyone yet.

Jayne: Captain says you’re to stay put, doesn’t want you runnin’ afoul of his blushin’ psychotic bride. She figures out who you are, she’ll turn you in before you can say “Don’t turn me in, Lady.”
Simon: This bounty on us just keeps getting more exciting.

Simon: How much did they offer you to sell out me and River on Ariel?
Jayne: That’s crazy talk.
Simon: Then let’s talk crazy. How much?
Jayne: Anybody there. River pops in. Anybody else?

Simon: I don’t care what you’ve done, I don’t know what you’re planning on doing, but I’m trusting you. I think you should do the same. ‘Cause I don’t see this working any other way.
River: Also, I can kill you with my brain.

Simon: She’s deeply intuitive. It’s true, it’s—
Mal: I don’t think she’s intuitive, Doctor. I think she’s a Reader.
Zoe: Psychic?
Wash: Is that even remotely possible?
Mal: You tell me. You’ve been studying what they’ve done to her.
Simon: They’ve, uh, they’ve definitely altered the way she reacts to things. Even the way she perceives. But I’m not—
Wash: Psychic, though? That sounds like something out of science fiction.
Zoe: You live on a space ship, dear.

Jubal Early: I like this ship. Serenity. She’s good looking.
Simon: How did you get on… ?
Jubal Early: Strains the mind, don’t it?

Simon: Come on out, River. The nice man wants to kidnap you.

Early: Your sister’s becoming a real annoyance.
Simon: I feel for you.

Jubal Early: Where’d she go?
Simon: I can’t keep track of her when she’s not incorporeally possessing a spaceship. Don’t look at me.

Early: I only hurt people because they keep getting in the way of me finding you. {to Simon}. Tell her.
Simon: What am I your advocate?
Early: You are starting now.
Simon: He’s really very… gentle and fuzzy. We’re becoming fast friends.
Early: You folks are all insane.
Simon: Well my sister’s a ship. We had a complicated childhood.