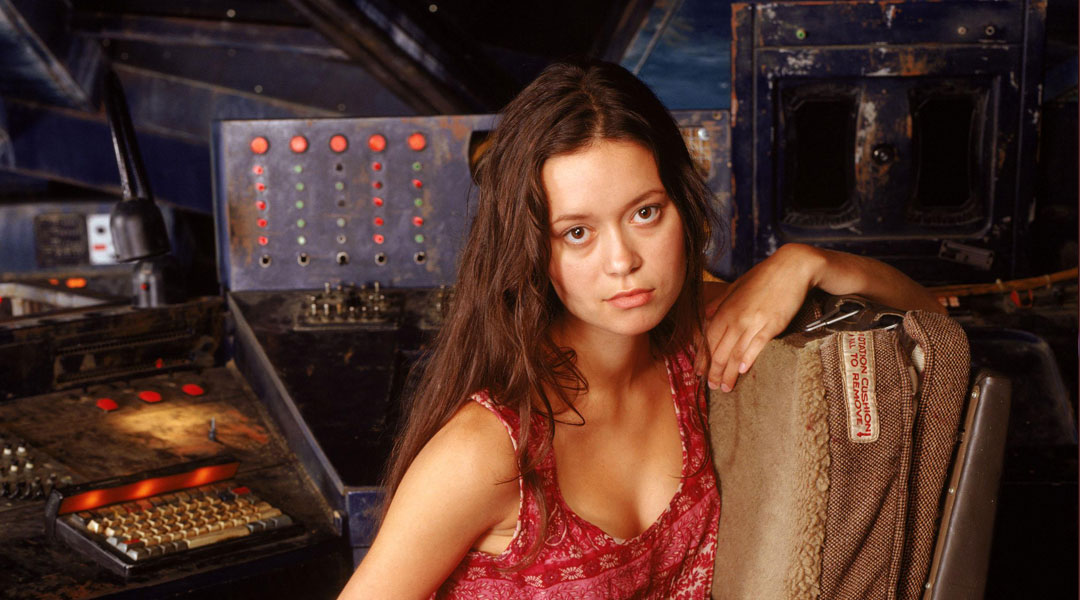 Simon: I need to check her vitals.
Mal: Oh, is that what they call it?
Simon: She’s not supposed to wake up for another week. The shock—
Mal: The shock of what? Waking up, finding out she’d been sold to some border world Baron? Or… I’m sorry, was this one for you? Is it true love? Because you do seem a little—
River: Augh!

Badger: Nice to see someone from the old homestead.
River: Not really. Tell me if anyone interesting shows up. walks off
Badger: I like her.
Jayne: That there, exactly the kind of diversion we could’ve used.

River: You’re wrong, Early. Wrong about River. River’s not on the ship. They didn’t want her here, but she couldn’t make herself leave. So she melted. Melted away. They didn’t know she could that, but she did.
Early: Not sure I take your meaning there.
River: I’m not on the ship. I’m in the ship. I am the ship.
Simon: River—
River: River’s gone.
Early: Then who exactly are we talking to?
River: You’re talking to Serenity. And Early? Serenity is very unhappy.

River: You’re a liar. I don’t think your intentions are honorable.
Early: Hell no. I’m a bounty hunter. That’s not generally considered honorable so much as… I live by a code, though. Which I think is worth—
River: You hurt people.
Early: Only when the job requires it.
River: Wrong. You’re a bad liar. You crawl inside me uninvited and you hurt my crew.

River: I know you have questions.
Mal: That would be why I just asked them.
River: But there isn’t a lot of time, Captain. I need you to trust me.
Mal: Am I dreamin’?
River: We all are. {Mal rolls his eyes.} Don’t make faces.

River: You’re not welcome here anymore, Early.
Early: You think I’m gonna leave here empty-handed?
River: I know it.
Early: Yeah, you know me real well.
River: Wish I didn’t. You like to hurt folk.
Early: That’s part of the job.
River: That’s why you took the job.

Jubal Early: I’ll be a son-of-a-whore. You’re not in my gorram mind. You’re on my gorram ship!
River laughing: It’s very interesting. All these buttons.
Jubal Early: Okay. We’re not touching those, okay? How the hell’d she get on my ship?
River: Put the gun away.
Jubal Early: Okay, I’m putting it away.
Simon: No… he’s not.

River: You’re not right, Early. You’re not righteous. You’ve got issues.
Jubal Early: No. Well yes. I could have that. You might have me figured out, huh. Good job.I’m not a hundred percent.
River: You talk too much.
Jubal Early: I’m flawed in that way. I sometimes go on. It’s been said.
River: It’s okay, Early. I’m going with you.
Simon: River, what are you— ?
River: I don’t belong. I’m dangerous, like you. Can’t be controlled. Can’t be trusted.
Everyone can just go on without me and not have to worry. People can be what they wanted to be. Be with the people they wanted. Live simple. No secrets.
Simon: No.
River: I’ll be fine.
I’ll be your bounty, Jubal Early. And I’ll just fade away.

River: Permission to come aboard?
Mal: You know, you ain’t quite right.
River: That’s the popular theory.
Mal: Go on, get in there. Give your brother a thrashing for messing up your plan.
River: He takes so much looking after.