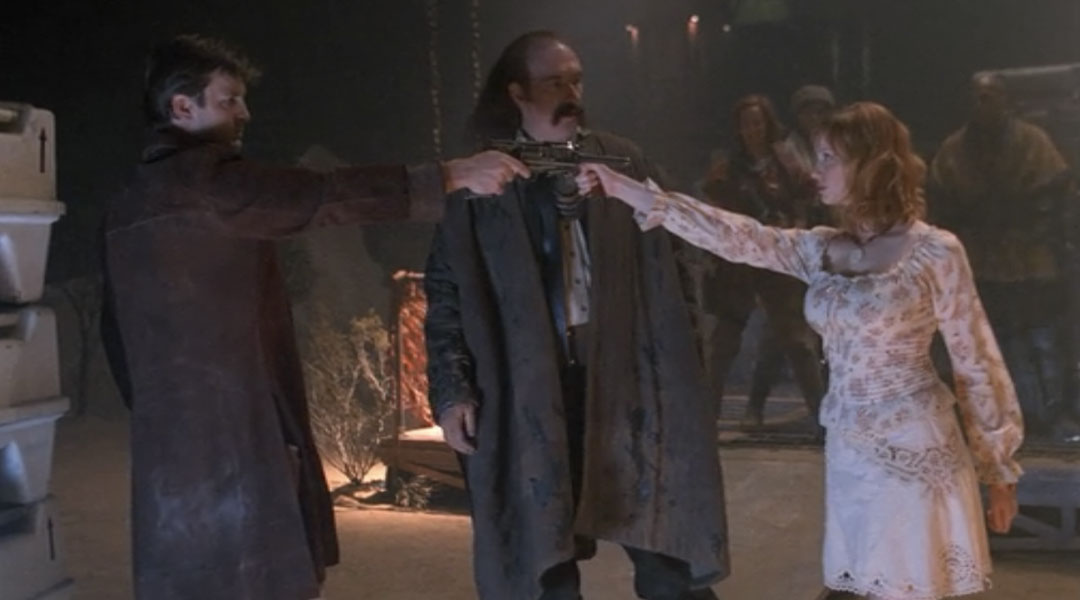 Monty: Mal, why you got a piece trained on my wife?
Mal: She ain’t your wife, Monty.
Monty: Huh? I married her, didn’t I?
Mal: You ain’t the only one.

Monty: What the hell is going on here? What do you mean she ain’t my wife?
Mal: She ain’t your wife, ’cause she’s married to me.

Mal: You and lipstick are a dangerous combination if I recall.

Saffron (Christina Hendricks): Oh yeah. just like old times.
Mal: We don’t have any old times. I just don’t want you pullin’ a pistol out of… of anywhere.
Saffron: You missed a spot.
Mal: Can’t miss a place you’ve never been.

Mal: Oh you are a tweaked one, you are.
Saffron: But face it, Hubby. I’m really hot.

Mal: This is my scrap of nowhere. You go on, find your own.
Saffron: You can’t just leave me here on this lifeless piece of crap moon.
Mal: I can.
Saffron: I’ll die.
Mal: Well as a courtesy you might start gettin’ busy on that, ’cause all this chatter ain’t doin’ be any kindness.

Saffron: This was all your fault, you know. I had the perfect crime lined up.
Mal: Sure. You were gonna steal a man’s beard.

Inara: Would you like some tea?
Mal: Okay. What’s your game?
Inara: I offered you tea.
Mal: Mm hm. After inviting me into your shuttle of your own free will. Which makes two events without precedent. Which makes me more than a little sketched.

Mal: This is one of the crazier things I’ve heard today. And when I tell you about the rest of my day you’ll appreciate—
Inara: I’m not accusing you of anything, Mal.
Mal: Hey! No! Let’s set a course for the planet of the lonely rich and appropriately hygienic men. I’ll tell Wash. We can park there for a month.

Mal: How about I stay out of your whoring—
Inara: Well that didn’t take long.
Mal: —you stay out of my thieving. I know my job very well, thank you very much.
Inara: Right. You’re a criminal mastermind. What was the last cargo we snuck past the Alliance to transport?
Mal: That’s not—
Inara: What was the cargo?
Mal: They were dolls.
Inara: They were little Geisha dolls with big heads that wobbled.
Mal: Hey, people love those!
Inara: And what exactly was our net profit on the famous wobbly-headed doll caper?
Mal: “Our” cut? So you’re in the gang now.

Wash: I’m confused.
Saffron: You’re asking yourself, if I’ve got the security codes why don’t I go in and grab it for myself.
Wash: No, actually. I was wondering, what’s she doing on this ship? Didn’t she try to kill us?!
Saffron: Please. Nobody died last time.
Wash: We’re in space! How did she get here?
Mal: She hid.
Wash: I don’t recall pulling over!

Saffron: See there. All you gotta do to be a rich woman, hon, is get over it.
Zoe: Hm. Okay. clocks Saffron. I’m in.

Durran: You! {sees Saffron} You found her. You brought back my wife.

Durran: You’ve returned to me the only thing I truly treasure.
Mal: Well. Then this is a day I’ll feel good to be me.

Durran: You won’t disappear again?
Saffron: Never. {he leaves.} We’ve gotta move fast.
Mal: Yeah, he might come back and hug us in the act.

Saffron: Durran, this isn’t what it looks like.
Mal: Unless it looks like we’re stealing your priceless Lassiter, ’cause that’s what we’re doing. Don’t ask me about the gun though, ’cause that’s new.
Durran: Well I appreciate your honesty. Not, you know, a lot.

Durran: How long have you been together?
Mal: We are not together!
Saffron: He’s my husband.
Mal: Well who in the damn galaxy ain’t?!

Mal: I hate to bring up our imminent arrest during your crazy time, but we gotta go.

Saffron: My name’s not Yolanda.
Mal: Never entered my mind it was.

Saffron: I tried. I actually tried. I thought, this is a decent man. The genuine article.
Mal: A workin’ man. Strugglin’ to get by with the barest necessities on his private floatin’ island.
Saffron: Yeah, he had money. I thought it would help. I thought if I had everything then I wouldn’t want—
Mal: Heinrich the security programmer.
Saffron: You know I’d forgotten his name.
Mal: Addressin’ the itch of curiousness, did you marry him too?
Saffron: No. I didn’t kill him either.
Mal: No, don’t reckon there’s many you killed. Just put him in a position to die easy.

Inara: Honey, you look horrific.
Saffron: What are you doing here?
Inara: Oh. Just my part of the job.
Saffron: What part of the job?
Inara: You know, I put on a big act, storm away in a huff. Then I fly off, wait for you to double-cross Mal, beat you to the rendezvous spot and grab the loot before you can get to it. What? You didn’t see it coming?

Simon: How much did they offer you to sell out me and River on Ariel?
Jayne: That’s crazy talk.
Simon: Then let’s talk crazy. How much?
Jayne: Anybody there. {River pops in}. Anybody else?

Simon to Jayne: I don’t care what you’ve done, I don’t know what you’re planning on doing, but I’m trusting you. I think you should do the same. ‘Cause I don’t see this working any other way.
River: Also, I can kill you with my brain.