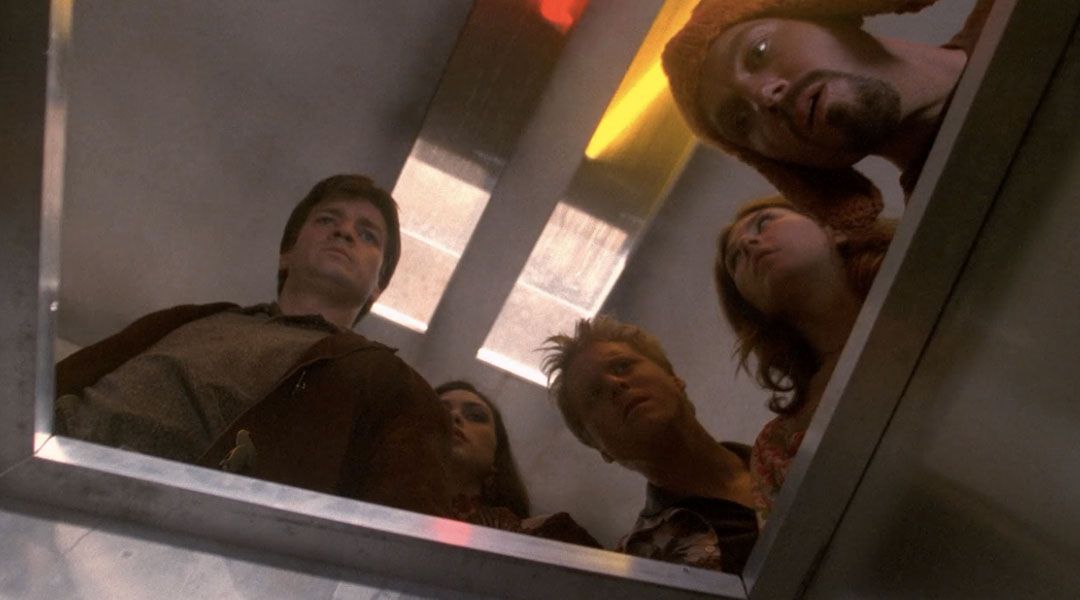 Wash: Oh my god, it’s grotesque! Oh, and there’s something in a jar.

Wash: Do not fear me! Ours is a peaceful race. And we must live in harmony.

Inara: So, do aliens live among us?
Kaylee: Yeah. And one of them is a doctor.

Jayne about his hat: How’s it sit? Pretty cunning, don’t you think?

Tracey (Jonathan M. Woodward): Thanks. I didn’t know you were out there.
Zoe: Sort of the point. Stealth. You may have heard of it.
Tracey: I don’t think they covered that in Basic.
Zoe: Well at least they covered “dropping your weapon so you can eat beans and get yourself shot.”
Tracey: Yeah, I got a badge in that. Won’t happen again.
Zoe: When it does I’m just gonna watch.

Zoe: First rule of battle, Little One: Don’t ever let them know where you are.
Mal with guns blazing: I’m right here! I’m right here! You wanna come in? Yeah you do! C’mon! C’mon!
Zoe: Course there are other schools of thought.
Mal: That was bracing! They don’t like it when you shoot at ’em. I worked that out myself.

Mal: Tracey, ain’t you dead yet?
Tracey: Through no fault of my own.
Mal: I really wanted your beans.

Tracey: I don’t want to die here. Forgive me saying, this rock ain’t worth it. Not our lives.
Mal: Everybody dies, Tracey. Someone’s carrying a bullet for you right now, doesn’t even know it. The trick is, die of old age before it finds you.

Tracey: You know it’s funny. We went to the war never looking to come back. But it’s the real world I couldn’t survive. You two carried me through that war and now I need you to carry me just a little bit further. If you can. Tell my folks I wanted to do right by them, and that I’m at peace and all. When you can’t run anymore you crawl. And when you can’t do that, well… yeah, you know the rest.

Amnon Duul: I’ve broken no law.
Lieutenant Womack (Richard Burgi): Transportation of human cargo—especially dead cargo—through the Allied postal system is punishable by five to ten years on a penal moon. PLus you don’t know this yet, but you resisted arrest. Where’s my body?
Amnon Duul: I— I don’t know. I I—
Womack: The dead guy. He got shipped here. He shipped back out I guess. Where?

Womack: Relax! You did great. And I was just bluffing, all that stuff about arresting you. Who needs that kind of paperwork? Skunk, light him on fire.

Book: Oh, River! That might not be the best place—
River: This is very comfortable.
Book: I guess we do all have different reactions to death.

Wash: Police procedure has changed since I was little.
Mal: He calls back, you keep him occupied.
Wash: What do I do? Shadow puppets?

Zoe: You really think there’s something in there?
Mal: Using corpses for smuggling is a time-honored repulsive custom.
Jayne: Maybe it’s gold.
Zoe: And maybe he was a friend of ours and you need to show more respect.

Mal: You wanna explain to me exactly why you got yourself all corpsified and mailed to me? Where you running from?
Tracey: Running to, not from. I just wanted to get home, that’s all. That’s all I ever wanted. Except there’s none that take exception to that. To me leaving. While I was in possession of their property.
Mal: What’d you boost, Tracey?
Tracey: Was it gold?
Mal: More importantly, who’d you boost it from?

Tracey: You think I’m stupid?
Mal: In every way possible.
Tracey: You know why I picked you and Zoe? Because you’re saps. You reppin’ out as stone killers, but I still remember the old Sarge with his stories and his homilies. And glory and honor.

Mal: You hear that quiet? It means the call’s already been made.
Tracey: Well that call, that call means you just murdered me.
Mal: No, son. You murdered yourself. I just carried the bullet a while.

Womack: That hat makes you look like an idiot.

Tracey: Sarge, um, that stupid message of mine and… I was trying to play you guys and now… You’ll do it? You’ll get me home?
Mal: Well you know the old saying.
Tracey: When you can’t run, you crawl. And when you can’t crawl, you can’t do that…
Zoe: You find someone to carry you.