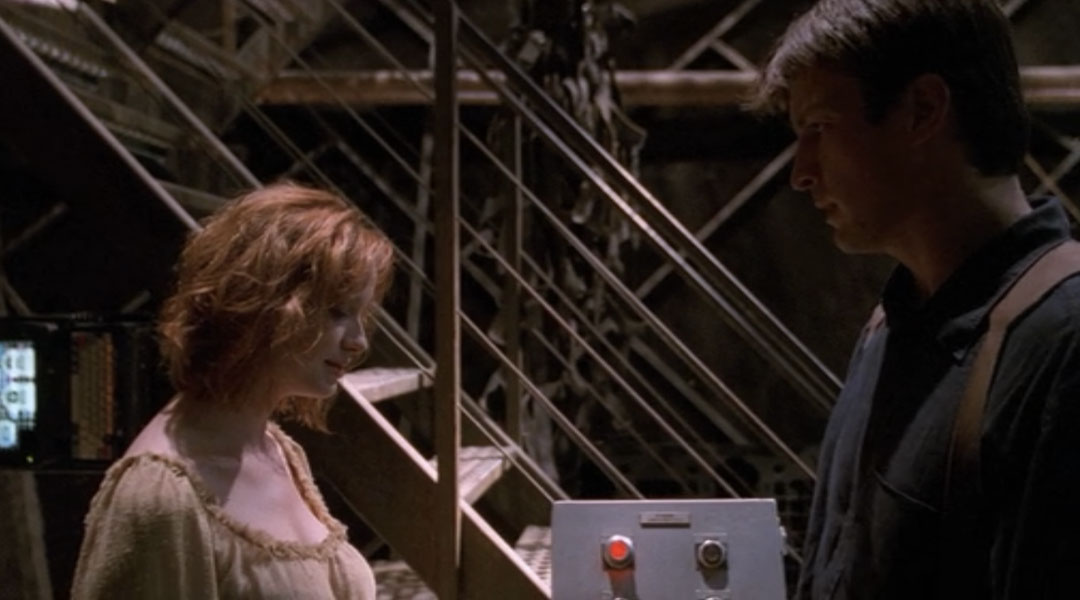 Rustler: I think maybe you’ gonna give me a little one-on-one time with the missus.
Jayne: Well I think you might wanna reconsider that last part. See, I married me a powerful ugly creature.
Mal popping up from under the bonnet: How can you say that? How can you shame me in front of new people?
Jayne: If I could make you prettier I would.
Mal: You are not the man I met a year ago.

Inara: So explain to me again why Zoe wasn’t in the dress.
Mal: Tactics, woman. We needed her in the back. ‘Sides, them soft cotton dresses feel kinda nice. Just the whole air flow.
Inara: And you would know that because?
Mal: You can’t open up the book of my life and jump in the middle. Because woman, I am a mystery.
Inara: Let’s keep it that way. I withdraw the question.

Mal: Who the hell are you?
Saffron (Christina Hendricks): What do you mean?
Mal: Well I think I was pretty clear. What are you doing on my boat?
Saffron: You know I am bequeathed to you.
Mal: To what by who?
Saffron: Did Elder Gommen not tell you?
Mal: Tell me what? Who are you?
Saffron: Mr. Reynolds, sir. I’m your wife.

Jayne to Mal: You got a wife? How come I only got that dumb ass stick ‘sounds like it’s raining?

Zoe: Really think you’re the one to talk to her, sir.
Mal: The way I see it me and her got one thing in common. We’re the only one’s that don’t think this is funny.

Mal: You alright?
Saffron: I thought last night during the ceremony that you looked pleased.
Mal: Well, yeah. Last night I was. Some mulled wine. Pretty girl gave me a hat made
out of a tree. Nobody said I was signing up to have and hold.
Saffron: Are you gonna kill me?
Mal: What? What kind of crappy planet is that? Kill you.
Saffron: In the maidens’ home I heard talk of men who weren’t pleased with their brides—
Mal: Well I ain’t them. And don’t you stand for that sort of thing. If someone ever tries to kill you try to kill them right back.

Wash: Every planet has its own weird customs. About a year before we met I spent six months on a moon where the principle form of recreation was juggling geese. Hand to God. Baby gees—goslings. They were juggled.

Wash: Is there anything else on your mind that I should know about? There’s all sort of twists and cul-de-sacs. It’s wild.

Inara: Come to my shuttle.
Saffron: You would lie with me?
Alarms go off
Inara: I guess we’ve lied enough.
Saffron: You’re good.
Inara: You’re amazing. Who are you?
Saffron: Malcolm Reynolds’ widow.

Wash: Okay. Everybody not talking about sex, in here. Everybody else, elsewhere.

Jayne to Book: One day you’re gonna tell us all how a preacher knows so damn much about crime.

Jayne: See, Vera? Dress yourself up you get taken somewhere fun.

Saffron: Are you gonna kill me?
Mal: Can you conjure up a terribly compelling reason not to?