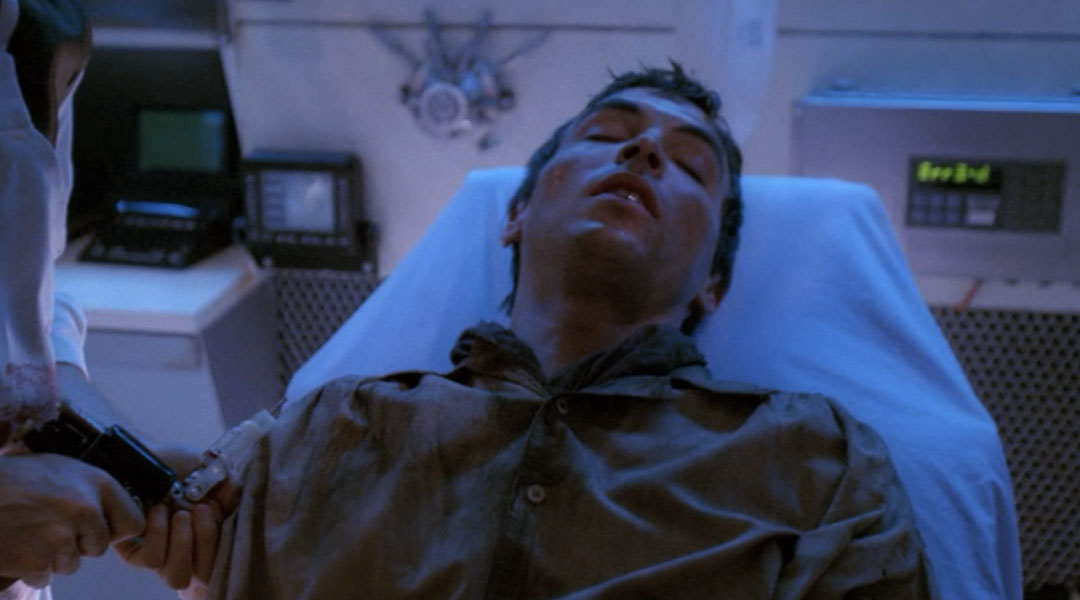 Zoe: Proximity alert. We must be coming up on something.
Wash: Oh my god! What could it be? We’re all doomed! Who’s flying this thing?! Oh right, that would be me. Back to work.

Mal: Wash, you have a stroke or something?
Wash: Near enough.
Zoe: What happened?

Mal: Anybody home?
Wash: I’ve been hailing here, but whoever’s there is as healthy as the guy we just ran over. I can’t imagine anybody’s gonna be picking up.
Mal: Bring us in a little closer.
Wash: I’ll get you close enough to ring the doorbell.

Simon: What is it?
River eavesdropping in the hall: It’s ghosts.

Jayne: Tell you what I think, I figure that fella we run into did everyone on board. Killed em. Then he decided to take a swim, see how fast his blood could boil out of his ears.
Wash: You’re a very up person.

Jayne: Where do you think you’re headed?
Simon: Thought I’d offer my services. In case anyone on board required medical attention.

Simon: Where are all the people?
Mal: Ship says lifeboat launched more than a week ago. We’re gonna assume everyone got off okay. Anyway, we’re just here to pick the bones.

Zoe: Sir, I count six families signed on. Lifeboat wouldn’t hold a third of that.
Mal: I know.

Zoe about the goods: Sir, even on a lifeboat, you’d think those who escaped would find room for some of this.
Mal: Nobody escaped.
Zoe: Sir?
Mal: Nobody.

Mal: Easy now. No one’s going to hurt you.
No. No mercy. No.
Mal: Any more than we already did.
No mercy.
Mal: We got a lots of mercy. We got lots and lots of—

Kaylee: So? How’s our patient?
Simon: Aside from borderline malnutrition he’s in remarkably good health.
Book: So he’ll live then?
Mal: Which to my mind is unfortunate.
Book: Not a very charitable attitude, Captain.
Mal: Charity’d be putting a bullet in his brain pan.

Mal: There’s no more we can do for him now. Not after what he’s seen.
Simon: What do you mean?
Mal: That ship was hit by Reavers.

Jayne: Wasn’t Reavers. Reavers don’t leave no survivors.
Mal: Strictly speaking, I wouldn’t say they did.
Book: What are you suggesting?
Mal: Doesn’t matter if we took him off that boat, Shepherd. It’s the place he’s gonna live from now on.
Book: I don’t accept that. Whatever horror he witnessed, whatever acts of barbarism, it was done by men. Nothing more.
Jayne: Reavers ain’t men.
Book: Of course they are. Too long removed from civilization perhaps. But men. And I believe there’s a power greater than men, a power that heals.
Mal: Reavers might take issue with that philosophy. If they had a philosophy. If they weren’t too busy gnawing on your insides. Jayne’s right. Reavers ain’t men. They forgot how to be. They got out to the edge of the galaxy, to that place of nothing, and that’s what they became.

Mal: I ain’t sayin’ there’s any peace to be had, but on the off-chance there is, those folks deserve a little of it.
Inara: Just when I think I’ve got you figured out {she walks off}.
Kaylee: That was real pretty, Captain. What you just said.
Wash: Didn’t think you were one for rituals and such.
Mal: I’m not. But it’ll keep the other busy for awhile. Don’t always need to concern them with what’s to be done.
Sir?

Mal: It’s a real burden being right so often.
Wash: What is that?
Mal: Booby trap. Reavers sometimes leave them for the rescue ship. Triggered it when we latched on.
Wash: And when we detach?
Mal: It blows.

Mal: You tell me right now, little Kaylee, you really think you can do this?
Kaylee: Sure. Yeah. I think so. Besides, if I mess up it’s not like you’ll be able to yell at me.

Alliance: Firefly-class transport, you are ordered to release control of your helm. Prepare to dock and be boarded.
Mal: Looks like civilization finally caught up with us.

Mal: Stack everything right here, in plain sight. wouldn’t want to seem like we got anything to hide. Might give them Alliance boys the wrong impression.
Wash: Or the right one.
Mal: That too.

Alliance Commander: Looks to me like an illegal salvage operation.
Mal: It does? That’s discouraging.

Alliance Commander: It’s a curiosity. A woman of stature such as yourself falling in with… these types.
Inara: Not in the least. It’s a mutually beneficial business arrangement. I rent the shuttle from Captain Reynolds, which allows me to expand my client base. And the Captain finds that having a companion on board opens certain doors that might otherwise be closed to him.

Alliance Commander: Pirates. Pirates with their own chaplain. There’s an oddity.
Book: Not the only oddity this end of space, Commander. Where things aren’t always so plain as on the central planets. Rules can be a mite fussier.

Alliance Commander: That’s a very loyal crew you have there. But then I can tell by your record you have a tendency to inspire that quality in people. Sergeant.
Mal: It’s not Sergeant. Not no more. The war’s over.
Alliance Commander: For some the war will never be over.

Alliance Commander: Seems odd you’d name your ship after a battle you were on the wrong side of.
Mal: May have been the losing side. Still not convinced it was the wrong one.