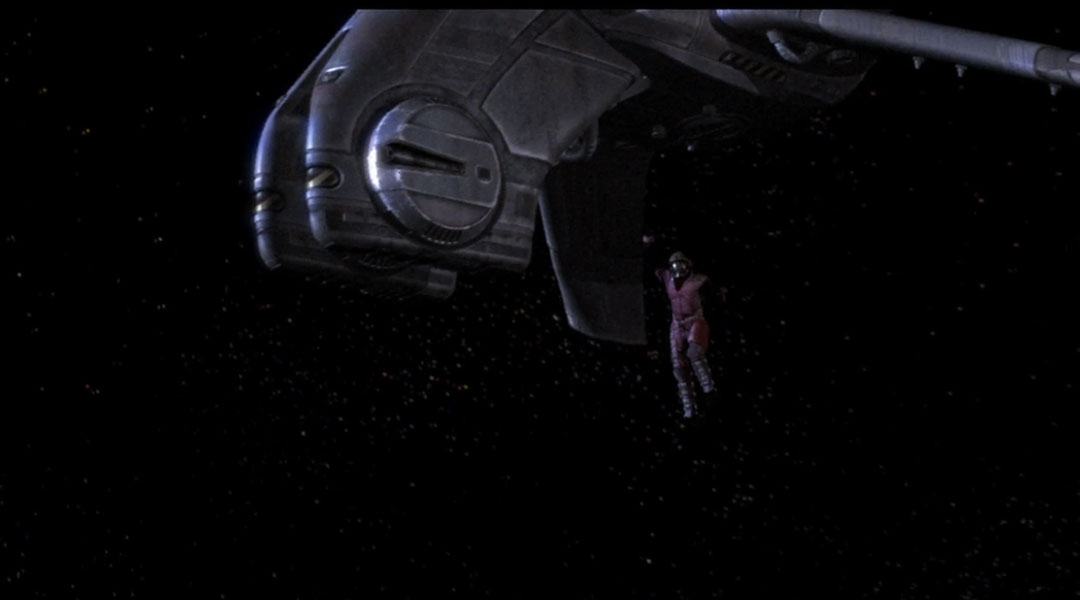 Mal: Fully-loaded, safety off. This here is a recipe for unpleasantness.

Mal: We’re deep in space. Corner of no and where. You take extra care. ‘Cause we’re very much alone out here.

Wash: Little River just gets more colorful by the moment. What’ll she do next.
Zoe: Either blow us all up or rub soup in our hair. It’s a toss up.
Wash: I hope she does the soup thing. It’s always a hoot and we don’t all die from it.

Simon: She probably didn’t even know what was going on. Thought it was a game.
Jayne: Later on you can explain to me how that’s a comfort.

Mal: I find River pleasant enough myself. But she does have an oddness to her. And I ain’t just talkin’ about her proficiency with firearms. Girl knows things. Things she shouldn’t. Things she couldn’t.
Jayne: Are you, are you saying she’s a witch?
Wash: Yes Jayne. She’s a witch. She has had congress with the Beast.
Jayne: She’s in congress?
Simon: She’s deeply intuitive. It’s true, it’s—
Mal: I don’t think she’s intuitive, Doctor. I think she’s a Reader.
Zoe: Psychic?
Wash: Is that even remotely possible?
Mal: You tell me. You’ve been studying what they’ve done to her.
Simon: They’ve, uh, they’ve definitely altered the way she reacts to things. Even the way she perceives. But I’m not—
Wash: Psychic, though? That sounds like something out of science fiction.
Zoe: You live on a space ship, dear.

Jayne: If wishes were horses we’d all be eating steak.

Jubal Early (Richard Brooks): I like this ship. Serenity. She’s good looking.
Simon: How did you get on… ?
Jubal Early: Strains the mind, don’t it?

Simon: Are you Alliance?
Jubal Early: Am I a lion?
Simon: What?
Jubal Early: I don’t think of myself as a lion. You might as well though. I have a mighty roar.
Simon: I said “Alliance.”
Jubal Early: Oh I thought…
Simon: No, I was—
Jubal Early: That’s weird.

Simon: You’re out of your mind.
Jubal Early: That’s between me and my mind.

Simon: And which part of your plan dictated the necessity of beating up a Shepherd?
Jubal Early: That ain’t a Shepherd.

Simon: Come on out, River. The nice man wants to kidnap you.

Early: Firefly is a good design. People don’t appreciate the substance of things. Objects in space. People miss out on what’s solid… It’s not your moment, Doctor.

Early: Your sister’s becoming a real annoyance.
Simon: I feel for you.

Inara: You can still walk away from this. I know you’re tired.
Early: Don’t go visiting my intentions. Don’t ever.

River: You’re wrong, Early. Wrong about River. River’s not on the ship. They didn’t want her here, but she couldn’t make herself leave. So she melted. Melted away. They didn’t know she could that, but she did.
Early: Not sure I take your meaning there.
River: I’m not on the ship. I’m in the ship. I am the ship.
Simon: River—
River: River’s gone.
Early: Then who exactly are we talking to?
River: You’re talking to Serenity. And Early? Serenity is very unhappy.

Jubal Early: Where’d she go?
Simon: I can’t keep track of her when she’s not incorporeally possessing a spaceship. Don’t look at me.

River: You’re a liar. I don’t think your intentions are honorable.
Early: Hell no. I’m a bounty hunter. That’s not generally considered honorable so much as… I live by a code, though. Which I think is worth—
River: You hurt people.
Early: Only when the job requires it.
River: Wrong. You’re a bad liar. You crawl inside me uninvited and you hurt my crew. I see everything that passes—
Early: I only hurt people because they keep getting in the way of me finding you. {to Simon}. Tell her.
Simon: What am I your advocate?
Early: You are starting now.
Simon: He’s really very… gentle and fuzzy. We’re becoming fast friends.
Early: You folks are all insane.
Simon: Well my sister’s a ship. We had a complicated childhood.

Mal: What the hell’s going on here?
River: I need you to do me a favor, Captain.
Mal: There’s a guy. He’s very blurry. You better be careful. How come there’s a guy on board and how come you’re all a sudden the ship?
River: I know you have questions.
Mal: That would be why I just asked them.
River: But there isn’t a lot of time, Captain. I need you to trust me.
Mal: Am I dreamin’?
River: We all are. {Mal rolls his eyes.} Don’t make faces.

Jubal Early: You know with the exception of one deadly and unpredictable midget this girl is the smallest cargo I’ve ever had to transport. Yet by far the most troublesome. Does that seem right to you?

River: You’re not welcome here anymore, Early.
Early: You think I’m gonna leave here empty-handed?
River: I know it.
Early: Yeah, you know me real well.
River: Wish I didn’t. You like to hurt folk.
Early: That’s part of the job.
River: That’s why you took the job.

Jubal Early: I’ll be a son-of-a-whore. You’re not in my gorram mind. You’re on my gorram ship!
River laughing: It’s very interesting. All these buttons.
Jubal Early: Okay. We’re not touching those, okay? How the hell’d she get on my ship?
River: Put the gun away.
Jubal Early: Okay, I’m putting it away.
Simon: No… he’s not.

River: You’re not right, Early. You’re not righteous. You’ve got issues.
Jubal Early: No. Well yes. I could have that. You might have me figured out, huh. Good job.I’m not a hundred percent.
River: You talk too much.
Jubal Early: I’m flawed in that way. I sometimes go on. It’s been said.
River: It’s okay, Early. I’m going with you.
Simon: River, what are you— ?
River: I don’t belong. I’m dangerous, like you. Can’t be controlled. Can’t be trusted.
Everyone can just go on without me and not have to worry. People can be what they wanted to be. Be with the people they wanted. Live simple. No secrets.
Simon: No.
River: I’ll be fine.
I’ll be your bounty, Jubal Early. And I’ll just fade away.

Jubal Early having just shot Simon: See. That’s what it feels like.

Jubal Early: You made the right move darlin’. Best for you to go on with ol’ Early.
Mal popping up: You think so? Some of us feel differently.

River: Permission to come aboard?
Mal: You know, you ain’t quite right.
River: That’s the popular theory.
Mal: Go on, get in there. Give your brother a thrashing for messing up your plan.
River: He takes so much looking after.

Zoe: This is really not my area of expertise, Doctor. I tend to be putting these into people more than the other thing.
Wash: Can I mop your brow? I am at the ready with the fearsome brow-mop.

Jubal Early: Well. Here I am.