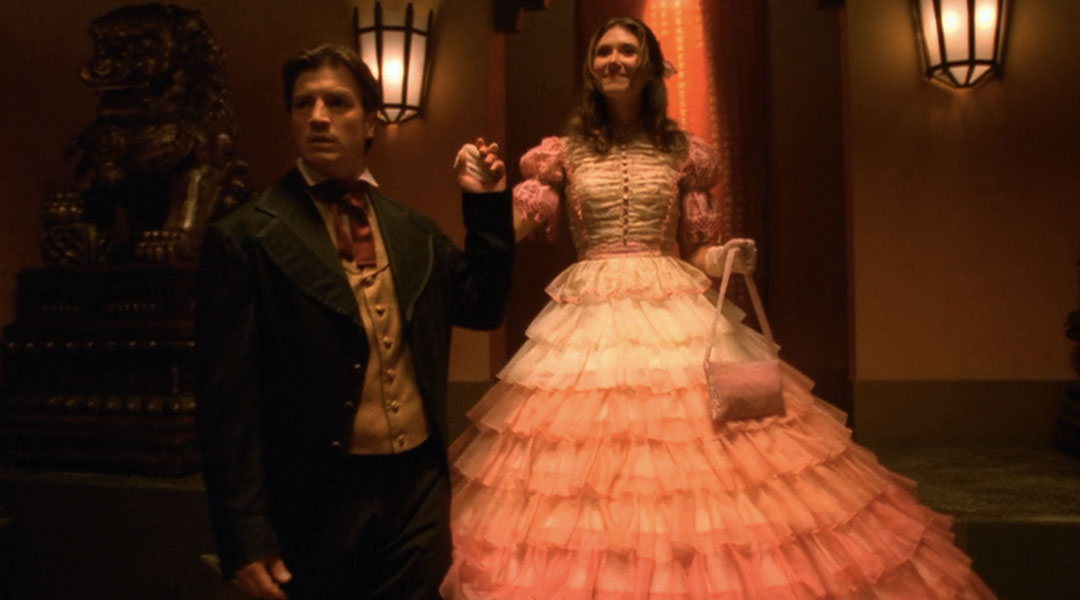 Mal: There’s a chance you might wanna head back to the ship.
Inara: I’m alright. This is entertaining, actually.
Mal: Yeah? What’s entertaining?
Inara: I like watching the game. There’s a lot of situations. The key seems to be giving Jayne a heavy stick and standing back.
Mal: Still, you might oughta clear out before too much longer, seems there’s a thief about.
Inara: A thief?
Mal pulls out a wallet: Took this right off him. And he earned that with the sweat of his slave-trading brow.
Inara: Mal!
Mal: Oh, terrible shame. Of course they won’t discover it ’til they go to order their next round of drinks. {he gets grabbed from behind}. Good drinker, that one.

Zoe: We’re gonna stay awhile on Persephone.
Wash: Shiny.
Zoe: Yeah. Thought you get land-crazy, that long in port.
Wash: Probably. But I’ve been sane a long while now and change is good.

Mal: We sniff the air, we don’t kiss the dirt.
Zoe: I wasn’t planning on the dirt kissin’, sir.
Wash: I wouldn’t stand for it anyway, Captain. Jealous man like me.

Zoe: Planet’s coming up a might fast.
Wash: That’s just because I’m going down too quick. Likely crash and kill us all.
Zoe: Well when that happens let me know.

Mal: Badger!
Badger (Mark A. Sheppard): Captain Reynolds. I heard you was in town. I thought we might have a bit of a sit down.
Mal: I prefer a bit of a piss off.
Badger: I’m very sorry. Did I give you the impression I was asking?

Mal: Seems to me the last time there was a chance for a little palaver we were all manner of unwanted.
Jayne: This ain’t bad.
Badger: There’s a trick to it. Wood alcohol.
Mal: Now we’re favored guests. Treated to the finest in beverages that make you blind.

Mal: You backed out of a deal last time. Left us hanging.
Jayne: Hurt our feelings.
Mal: You recall why that took place?
Badger: I had a problem with your attitude is why. I felt you was… what’s the word?
Mal: Pretentious?
Badger: Exactly! You think you’re better than other people!
Mal: Just the ones I’m better than.

Atherton Wing (Edward Atterton): Half the men in this room wish they were on your arm tonight.
Inara: Only half? I must be losing my undefinable allure.
Atherton: Oh, it’s not that undefinable. All of them wish they were in your bed.

Mal: Does, ah, does this seem kind of tight?
Kaylee: It shows of your backside. Did you see the chandelier? It’s hovering.
Mal: What’s the point of that, I wonder.
Kaylee: Oh, mangoes!
Mal: I mean I see how they did it, I just don’t get the why.
Kaylee: Those girls have the most beautiful dresses. And so do I! How ’bout that?
Mal: Yeah, well just be careful. We cheated Badger out of good money to buy that frippery. And you’re supposed to make me look respectable.
Kaylee: Yes sir, Captain Tight Pants.

Kaylee: Is that him?
Mal: That’s the buffet table.
Kaylee: But how can we be sure? Unless we question it.
Mal: Fine. Don’t make yourself sick.

Wash: Don’t fall asleep now. Sleepiness is weakness of character. Ask anyone.
Zoe: It is not.
Wash: You are acting captain. Know what happens you fall asleep now?
Zoe: Jayne slits my throat and takes over.

Murphy: What a vision you are, in your fine dress. It must have taken a dozen slaves a dozen days to get you into that get-up. ‘Course your daddy tells me it takes the space a school boy’s wink to get you out of it again. {the debutantes scatter.} Forgive my rudeness. I cannot abide useless people.

Harrow: You’re a brave man.
Atherton: I know what’s mine.

Inara: I see Kaylee’s here.
Mal: Cried Cinderella tears. You should have seen her when I told her she could have that layered cake she’s wearing.
Inara: I think she looks adorable.
Mal: Yeah, but. I never said it.

Mal hitting Atherton: Turns out this is my kind of party!
Inara: Oh Mal.
Mal: What? The man was out of line.
Atherton: I accept!
Mal: That’s great! What?
Attendant: There has been a challenge.
Atherton: I hope you’re prepared, Captain.
Mal: What? You all talking about a fight? Well that’s fine. Let’s get out of here.
Inara: It’s not a fist fight, Mal.
Attendant: The duel will be met tomorrow morning at [Kitree Palm].
Mal: Well why wait? Where’s that guard? He collected a whole mess of pistols.
Attendant: If you require, any of the gentlemen here can give you use of a sword.
Mal: Use of a swhat?

Kaylee: What’s going on?
Mal: Not rightly sure. What’s going on?
Harrow: Well first off, you’ll be put up in lodgings for the night so you don’t disappear. I wouldn’t blame you, incidentally. Wing may be a spoiled dandy, but he’s an expert swordsman. He’s killed a dozen men with a long blade. You’re the only one gave him a reason.
Mal: This is a joke.
Inara: You’ll need a second.
Mal: What’s that?
Harrow: I’ll take on the job.
Inara: He fights if you refuse.
Atherton: Inara, come with me please.
Mal: Now, you taking on this job, being my second, does this mean we’re in business?
Harrow: It means you’re in mortal danger. But you mussed up Atherton’s face. And that has endeared you to me somewhat. You might even give him a fight. Before he guts you.

Simon: The captain’s a good fighter. He must know how to handle a sword.
Zoe: I think he knows which end to hold.

Jayne: What we need’s a diversion. I say Zoe gets naked.
Wash: Nope.
Jayne: I could get naked.
Everyone: No!

Badger: Why ain’t she talk? She got a secret?
Simon: No, I’m, ah—
River: Sure. I got a secret. More than one. Don’t seem likely I’d tell ’em to you now, do it? Anyone off [Dyton Colony] knows better ‘n to talk to strangers. {She jabs at his lapel}. You’re talkin’ loud enough for the both of us, ain’t ya? I met a dozen like you. Skipped off home early. Minor graft jobs here and there. Spent some time in the lockdown, but less than you claim. There you are. Petty thief with delusions of standing. Sad little king of a sad little hill.
Badger: Nice to see someone from the old homestead.
River: Not really. Call me if anyone interesting shows up. {She walks off}
Badger: I like her.
Jayne: That there, exactly the kind of diversion we could’ve used.

Atherton: Get ready to starve. I’ll see to it you never work again.
Inara: Actually, that’s not how it works. You see you’ve earned yourself a black mark in the client registry. No companion is going to contract with you ever again.
Harrow: You’ll have to rely on your winning personality to get women. God help you.

Harrow: You didn’t have to wound that man.
Mal: Yeah, I know. It was just funny.

Jayne: We was just about to spring into action, Captain. A complicated escape and rescue op.
Wash: I was going to watch. It was very exciting.

Inara: Are you in pain?
Mal: Absolutely. I got stabbed you know. Right here.