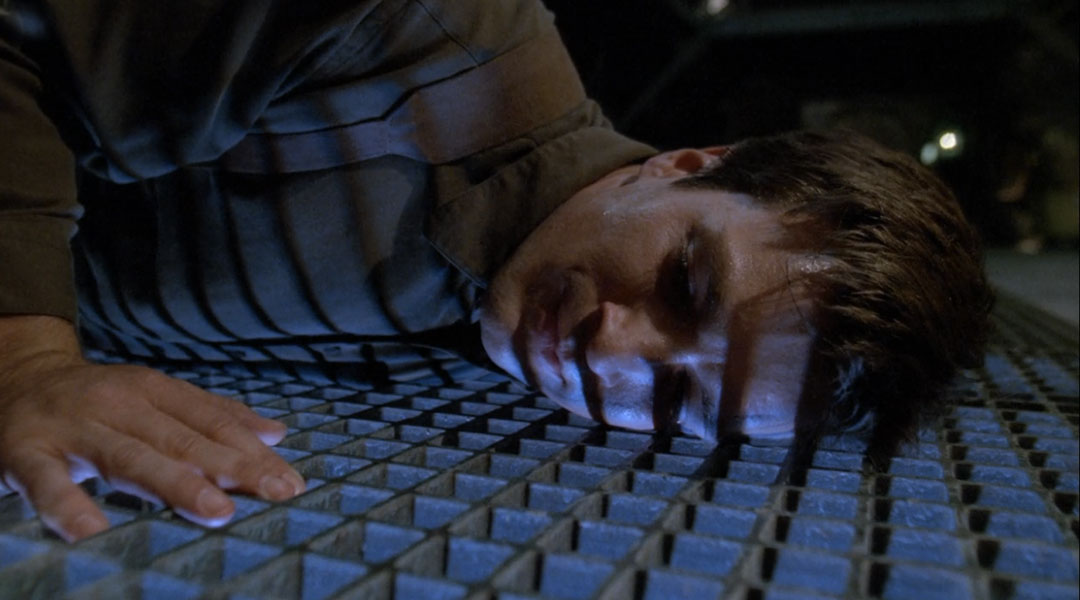 Zoe: You paid money for this, sir? On purpose?

Mal: She won’t be winning any beauty contests anytime soon, but she is solid. Ship like this, be with you ’til the day you die.
Zoe: ‘Cause it’s a death trap.
Mal: That’s not— You are very much lacking in imagination.
Zoe: I imagine that’s so, sir.
Mal: Come on, you haven’t even seen most of it. Let me show you the rest. And try to see past what she is and on to what she can be.
Zoe: What’s that, sir?
Mal: Freedom is what.
Zoe: I meant, what’s that.
Mal: Oh. Yeah, just step around that.

Mal: No matter how long the arm of the Alliance might get, we’ll just get ourselves a little further.
Zoe: Get ‘er runnin’ again.
Mal: Yeah.
Zoe: So not runnin’ now?
Mal: Not so much. But she will. I already know what I’m gonna call her. Got a name all picked out.

Kaylee: Happy Birthday, Simon
Simon: How did you know? River—
River: Day is a vestigial mode of time measurement based on solar cycles. Not applicable. I didn’t get you anything.

Jayne: Where you think you’re going?
Simon: Zoe’s been badly hurt. I need my medical supplies.
Jayne: Sorry, Doc. Nobody leaves. Everything’s sealed up tight.
Simon: If you don’t let me through, she could die.
Jayne: If I let you through, we all die.

Mal: Just, ah, fiddle around with the dials there.

Mal: Great, in’ he?
Zoe: I don’t like him.
Mal: What?
Zoe: Just something about him bothers me.

Zoe: He just bothers me.

Mal: Tell me what you know.
Kaylee: Catalyzer on the port compression coil blew. That’s where the trouble started.
Mal: Okay, I need that in Captain Dummy talk, Kaylee.
Kaylee: We’re dead in the water.
Mal: Can you fix it?
Kaylee: I can try.
Mal: Just get us to limpin’. That’s all I need. {Kaylee’s silent} What? What is it?
Kaylee: Well it’s worse than just the coil.
Mal: How can it be worse?
Kaylee: Even life support’s down on account of the engine being dead.
Mal: Right. But we got auxilliary life support.
Kaylee: No we don’t. It ain’t even on. Explosion must have knocked it out.
Mal: So what are we breathin’?
Kaylee: Whatever got pumped into the atmo before the explosion shut it all down.
Jayne: Most of that oxygen got ate up by the fire on its way out the door.
Kaylee: All we have that’s left is what we got.
Mal: How long?
Kaylee: Couple of hours, maybe. You’ll start to feel it, then you won’t feel nothin’ at all.

Inara: How is she?
Simon: She’s stable. Her vital’s are strong. She won’t know it, but as long as her condition remains like this she’ll outlive us all. She’s using less oxygen.

Jayne: Hey! What do you two think you’re doing, fighting at a time like this? You’re using up all the air!

Bester: What did you do?
Mal: She fixed it.
Kaylee: Well it wasn’t really broke.
Mal: How’d you learn how to do that, Miss?
Kaylee: Just do it, that’s all.

Kaylee: Are you offering me a job?
Bester: Woah. What?
Mal: I believe I just did.
Kaylee: I just gotta ask my folks. Don’t leave without me!
Bester: What do you need two mechanics for?
Mal: I really don’t.

Inara: Mal, this isn’t the ancient sea. You don’t have to go down with your ship.
Mal: She ain’t goin’ down. She ain’t goin’ anywhere. Jayne’ll be worth something if you run into trouble, but don’t trust him. And don’t let him take over. You’re paid up through the end of the month. It’s still your ship.
Inara: Mal—
Mal: As far as your security deposit goes, that I might have to owe you.

Inara: Just so we’re clear, under no circumstances will I be servicing you or anyone under your employ.
Mal: I’ll post a sign.

Inara: The Alliance has no quarrel with me. I supported unification.
Mal: Didja? Well I don’t suppose you’re the only whore that did.
Inara: Oh. One further addendum. That’s the last time you get to call me “whore”.

Inara: Mal, you don’t have to die alone.
Mal: Everybody dies alone.

Captain: Catalyzer is a nothing part, Captain.
Mal: It’s nothing ’til you don’t got one. Then it appears to be everything.

Mal: Which one do you figure tracked us.
Zoe: The ugly one, sir.
Mal nodding: …Could you be more specific?

Marco: Do we look reasonable to you?
Mal: Well looks can be deceiving.
Jayne: Not as deceivin’ as a low down, dirty… deceiver.
Mal: Well said, Wasn’t that well-said, Zoe?
Zoe: Had a kind of poetry to it, sir.
Jayne: You want I should shut ’em now, Marco?
Marco: Wait ’til they tell us where they put the stuff.
Jayne: That’s a good idea. Good idea. Tell us where the stuff’s at so I can shoot you.
Mal: Point of interest. Offering to shoot us might not work so well as an incentive as you might imagine. Anyway. We’ve hidden it. So. If you kill us you’ll never find it.
Jayne: Found you easy enough.
Mal: Yeah, you did, didn’t you? How much they paying you?
Jayne: Huh?
Mal: I mean let’s say you did kill us. Or didn’t. There could be torture. Whatever. But somehow, you found the goods. What would your cut be?
Jayne: Seven percent. Straight off the top.
Mal: Seven. Huh.
Jayne: What?
Mal: Hm? Nothing. Not a thing. I just… Does that seem low to you?
Zoe: It does sir.
Jayne: That ain’t low.
Marco: Stop it!
Jayne: Seven percent’s standard.
Mal: Okay. Zoe, I’m paying you too much.
Jayne: Why? What does she get?
Marco: Knock it off!
Mal: Look, I shouldn’t have said anything.. I’m sure you’re treated very well. You get the perks. Got your own room. No? You share a bunk?
Jayne: With that one.
Marco: Jayne! This ain’t funny.
Jayne: Yeah, I ain’t laughing.
Mal: You move on over to this side, we’ll not only show you where the stuff’s at, we’ll see to it that you get your fair share. Not no sad seven.
Jayne: Private room?
Marco: Jayne!
Mal: Your own room, full run of the kitchen. Full shot.
Marco: Jayne—
Jayne: Shut up! to Mal How big a room?

Mal: Take your people and go.
Captain: You would have done the same.
Mal: We can already see that I haven’t. Now get the hell off my ship.

Mal: I thought I ordered you all off the ship. Did I call you back?
Wash: No, Mal. You didn’t.
Zoe: I take full responsibility, Captain.
Simon: That decision saved your life.
Zoe: Won’t happen again, sir.
Mal: Good.

Salesman: Yep. Real beauty, ain’t she. Yes sir. Right smart purchase, this vessel. I’ll tell you what, you buy this ship, treat her proper, she’ll be with you for the rest of your life. {but Mal’s attention is on another vessel} Son? Hey, son! You hear a word I been sayin’?