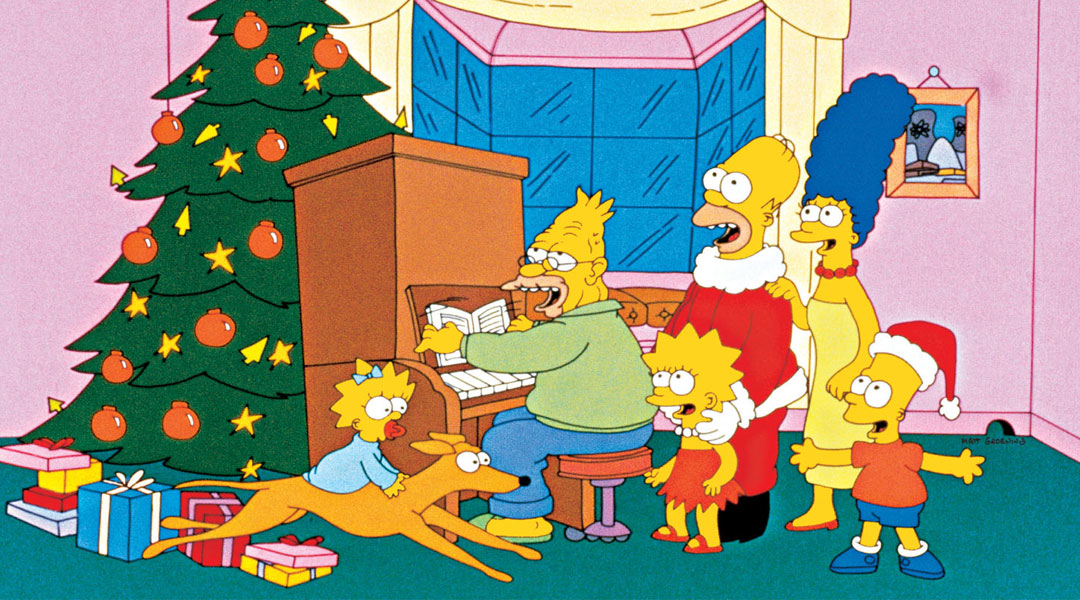 Simpsons Roasting on an Open Fire

Bart: There’s only one fat guy that brings us presents and his name ain’t Santa.

Homer: What do you think, kids? Beauty isn’t it?
Selma: Why is there a birdhouse in it?
Homer: Uh. That’s an ornament.
Patty: Do I smell gun powder?

Bart: If TV has taught me anything, it’s that miracles always happen to poor kids at Christmas.

Patty: It’s almost nine o’clock.
Selma: Where is Homer anyway?
Patty: It’s so typical of the big doofus to spoil it all.
Lisa: What, Aunt Patty?
Patty: Oh nothing, dear. I’m just trashing your father.
Lisa: Well, I wish that you wouldn’t. Because, aside from the fact that he has the same frailties as all human beings, he’s the only father I have. Therefore, he is my model of manhood, and my estimation of him will govern the prospects of my adult relationships. So I hope you bear in mind that any knock at him is a knock at me. And I am far too young to defend myself against such onslaughts.
Patty: Mm hm. Go watch your cartoon show, dear.

I will not waste chalk.

Bart: KWYJIBO. K-W-Y-J-I-B-O. Twenty-two points. Plus triple word score. Plus fifty points for using all my letters. Game’s over, I’m outta here.
Homer: Wait a minute, you little cheater! You’re not going anywhere until you tell me what a kwyjibo is.
Bart: Kwyjibo. Ah… a big dumb balding North American ape. With no chin.
Marge: And a short temper.
Homer: I’ll show you a big dumb balding ape!
Bart: Uh oh, kwyjibo on the loose!

Marge: Bart, this is a big day for you. Why don’t you eat something a little more nutritious.
Homer: Nonsense, Marge. Frosty Krusty Flakes are what got him where he is today. It could be one of these chemicals here that makes him so smart.

Homer: Come on, Bart. Your mother’s only trying to help. So go ahead and enjoy the show.
Marge: Homer, you’re going too.
Homer: But I’m not a genius. Why should I suffer?

I will not skateboard in the halls.

Mrs. Krabappel: Bart, not another word out of you, or I’ll subject you to the humiliation of making you sing in front of the class.
Bart: Can I pick the song?
Mrs. Krabappel: No. The song will be “John Henry was a Steel-Drivin’ Man”.

Lisa: Here’s a good job at the fireworks factory.
Homer: Those perfectionists? Forget it.

Homer: You’ll get that punk someday, Moe.
Moe: I don’t know. He’s tough to catch. He keeps changing his name.

After lugging a huge boulder to the bridge, only to find one sitting there.
Homer: Well. Live and learn.

Mr. Burns to Homer: You’re not as stupid a you look. Or sound. Or our best testing indicates.

I will not burp in class.

Homer: Okay, now look. My boss is going to be at this picnic so I want you to show your father some love and/or respect.
Lisa: Tough choice.
Bart: I’m picking respect.

Marge: I don’t want to alarm anybody, but I think there’s a little al-key-hol in this punch.

Homer: I’m sorry, Marge, but sometimes I think we’re the worst family in town.
Marge: Maybe we should move to a larger community.

Lisa: You’re sending us to a doctor that advertises on pro-wrestling?
Homer: Boxing, honey, boxing. There’s a world of difference.

Nelson Muntz: You made me bleed my own blood!

Bart: Look everybody, I would just as soon not make a big deal out of this. I’m not saying I’m not a hero, I’m just saying that I fear for my safety.

Marge: Bart, I hope you’re going straight to the principal about this.
Bart: I guess I could do that.
Homer: What?! And violate the code of the schoolyard? I’d rather Bart die.
Marge: What on earth are you talking about, Homer?
Homer: The code of the schoolyard, Marge! The rules that teach a boy to be a man. Let’s see. “Don’t tattle.” “Always make fun of those different from you.” “Never say anything unless you’re sure everyone feels exactly the same way you do.”

Bart: Ladies and gentlemen, boys and girls, contrary to what you’ve just seen, war is neither glamorous or fun. There are no winners, only losers. There are no good wars. With the following exceptions: the American Revolution, World War II and Star Wars trilogy.

I will not instigate revolution.

Mr. Largo: Lisa, there’s no room for crazy bebop in My Country ‘Tis of Thee.
Lisa: But Mr. Largo, that’s what My Country’s all about!

Gym Teacher: Listen, missy, just tell me why you weren’t getting out of the way of those balls.
Lisa: I’m too sad.
Gym Teacher: Too sad to play dodgeball? That’s ridiculous.

Lisa: Sorry Dad. I know you mean well.
Homer: Thanks for knowing I mean well.

Bleeding Gums Murphy: You know you play pretty well for someone with no real problems.
Lisa: Yeah, but I don’t feel any better.
Bleeding Gums Murphy: The Blues isn’t about feeling better. It’s about making other people feel worse. And making a few bucks while you’re at it.

Marge: Lisa, get away from that Jazz man!

Call of the Simpsons

I will not draw naked ladies in class.

Homer about the credit check: Is that a good siren? Am I approved?
Cowboy Bob (A. Brooks): You ever known a siren to be good? No, Mr. Simpson, it’s not. It’s a bad siren. That’s the computer in case I went blind telling me, “Sell the vehicle to this fellah, you’re out of business.”

Cowboy Bob: Mr. Simpson, you’re never going to own a better RV. And I don’t mean that in a good way.

I did not see Elvis.

Homer: A boy without mischief is like a bowling ball without a liquid center.

TV Announcer: Jebediah Obadiah Zechariah Jedediah Springfield came west in 1838. Along the way he met a ferocious bear and killed it with his bare hands. That’s B-A-R-E hands. Although modern historians recently uncovered evidence that the bear in fact probably killed him.

Life on the Fast Lane

Marge: Well it’s hard for me to judge—since I’ve never bowled in my life!

Homer: Well if you don’t want it…

Jacques: Meet me tomorrow for brunch.
Marge: What’s brunch?
Jacques: You’d love it. It’s not quite breakfast, it’s not quite lunch but it comes with a slice of cantaloupe at the end. You don’t get completely what you would at breakfast but you get a good meal.

Jacques about Helen Lovejoy: You have a lovely friend there. Let’s hope something runs over her.

Homer: Marge! What a lovely surprise. You’re here to see me, right?
Marge: Of course.

Co-worker: What’ll I tell the boss?
Homer: Tell him I’m going to the backseat of my car with the woman I love. And I won’t be back for ten minutes!

I will not call my teacher “hot cakes”.

Homer: Hey, what is this? The Spanish Expedition?

Apu: You look familiar, sir. Are you on the television or something?
Homer: Sorry, buddy. You got me confused with Fred Flintstone.

Homer: I’m sorry! I’m so sorry!
Marge: Homer, you don’t even know why you’re apologizing.
Homer: Yes I do. Because I’m hungry, my clothes are smelly, and I’m tired.

Mr. Burns: How does he do it, Smithers?

The Crepes of Wrath

Garlic gum is not funny.

Milhouse about the cherry bomb: So you gonna flush it?
Bart: What can I say? I got a weakness for the classics.

Principal Skinner: Mr. and Mrs. Simpson. We have transcended incorrigible. I don’t think suspension or expulsion will do the trick. I think it behooves us all to consider deportation.
Marge: Deportation? You mean kick Bart out of the country?
Homer: Hear him out, Marge.

Adil: Although officially I am required to hate you, I want you to know I do not feel it in my heart.

Homer: Please! Please, kids! Stop fighting. Maybe Lisa’s right about America being the land of opportunity and maybe Adil has a point about the machinery of capitalism being wound with the blood of the workers.

They are laughing at me, not with me.

Bart: Comedy, thy name is Krusty.

Apu: What’s the matter, sir? Never have I seen you looking so unhappy when purchasing such a large quantity of ice cream.

Robber: Hand over all your money in a paper bag.
Apu: Yes yes. I know the procedure for armed robbery. I do work in a convenience store, you know.

Apu: You can emerge now from my chips. The opportunity to prove yourself a hero is long gone.

Patty showing slides from the Yucatan: This is Selma taking a siesta.
Bart in a souvenir sombrero: Ay carumba.

Judge: Krusty the Clown, how do you plead?
Krusty: I plead guilty, your honor! {his shocked lawyer whispers in his ear} I mean not guilty. Opening night jitters, your honor.

Reverend Lovejoy: Now we are going to set this pile of evil ablaze, but because these are children’s toys the fire will spread quickly. So please stand back and try not to inhale the toxic fumes.

Sideshow Bob: So what’s on your mind, Bart? I bet the other children don’t accept you.
Bart: True, Sideshow Bob. But that doesn’t bother me.

Krusty: There was one boy who trusted me all along. Bart?
Bart: Yes sir.
Krusty: Thank you.

I will not yell “fire” in a crowded classroom.

Homer: Lord help me, I’m just not that bright.
Marge: Oh Homer, don’t say that. The way I see it, if you raised three children who can knock out and hog tie a perfect stranger you must be doing something right.