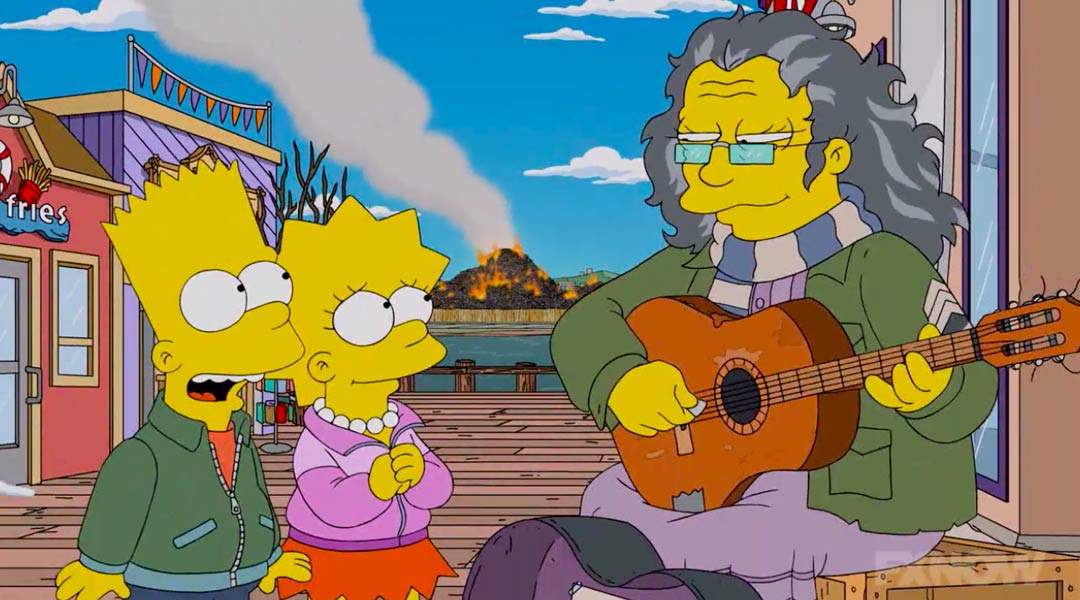 Marge Simpson: Kids, a professional felt the best way for your father and me to work on our relationship was to give up on it.

Homer: I wish my head was filled with guacamole.

Candace (Lena Dunham): Do not take these with alcohol.
Homer: What if I’ve already been drinking and I don’t plan to stop?
Candace: Are you asking me out?

Homer: If I don’t come home with a washing machine my wife will be so mad. Should I do the thing I’m supposed to do or the thing everybody knows I’m going to do?

Homer: I made them all for you.

Scotty Boom: I’m Scotty Boom and I’m challenging you to an eat-down!
Homer: What’s that? Some kinda eat-down?
Scotty Boom: It’s my new show where I use my big time New York City chef skills to obliterate amateur cooks.
Homer: Who would wtch such a one-sided farce? I’m in.

Lisa Simpson: Okay, look for clues. Are there any local mud samples that we can trace to local heaths and moors. {beat} Sorry. I’ve been watching a lot of Sherlock.

The Day Before Halloween

Homer: Oo. Mariachi skeletons. They’re spooky but they also teach you about Mexico.

Marge: Homer, I think we should take down Everscream Terrors.
Homer: What the—? We can’t! I’m the Mozart of Halloween decorations and tonight is the Super Bowl.

Homer: Look, I don’t want to be rude, but you sad losers should go suck somewhere else.

Sideshow Bob: It seems the only thing that made me happy in my accursed life was killing you. Well. If white zinfandel can make a comeback, so can you.

Sideshow Bob: I feel like a bad New Yorker cartoon.

CBG: Now we will no longer have anyone floating donuts uselessly in the ocean. They have made our fish fat and ugly. Pathetic.

Lisa: We’ve got to save him!
Bart Simpson: Fine. You’ll follow me with a camera, right? Because the important thing these days is everything must be on film.

Homer: You know this is an ASCAP household. God gave you this power for good, not Jazz.

Homer: If there’s anything that has true wisdom it’s crowds.

Rich Texan: I don’t give handouts to poor people. It’s not in the spirit of self-made Americanism. As espoused by Russian weirdo Ayn Rand.

Drederick Tatum: Remember when we were A-list?
Rainier Wolfcastle: It all went south for me when I got that DUI and said all those things I secretly believe.

Homer: Listen, Lady, you can’t take a daughter from a mother unless you’re a bigger star and this is a third world country!

Bart: Mom, if you have any doubts how a showbiz kid turns out, just look at all of them!

Moe: Cheering for someone getting a word right. That is a low bar.

Lisa: Let me try this again: will you help me break in to an abandoned insane asylum?

Bart: Sociopath? That’s they what they think I am? Fine. I’ll pretend to be the biggest sociopath in the world. And I only need to change three answers.

Marge: So how was your camping trip with your father?
Bart: It was okay. We got lots of Starwood Points at the hotel.
Marge: Oh! My thrifty pioneers.

Marge: First no more ¡Ay, caramba!, now this.
Bart: Mom, don’t have a—
Marge: “Have a cow, man”?
Bart: I was gonna say, Don’t have a foolish attachment to the past.

Milhouse: In college I’m gonna reinvent myself. I’ll pretend I have a girlfriend in Canada. I’ll say she lives in Alberta and her name is Alberta. So I don’t have to remember two lies.

Quinn Hopper (Kaitlin Olson): Well look what we got here. One Silicon Sally in a room full of dongle donkeys.
Lisa: I just wanna learn coding.
Quinn: You think I’m going to give you special treatment just because you ride a pink bike? Well I am. Hit the front row, sister.

Burns: Wordplay is for crosswords and Kazurinskys. We produce atomic energy. We can’t joke about the “m” word. How many people have seen this hate speech?
Smithers: Oh I don’t know. 55?
Burns: A baker’s half hundred. Good lord!

Homer: I hate the modern world and all its made up words! Siri, tell Amazon to drone me a beer.

Apu: I know you have concerns, but this video will gloss over all of them.
Homer: It better.

Skinner: You do not have to tutor this boy under the new One Child Left Behind law.