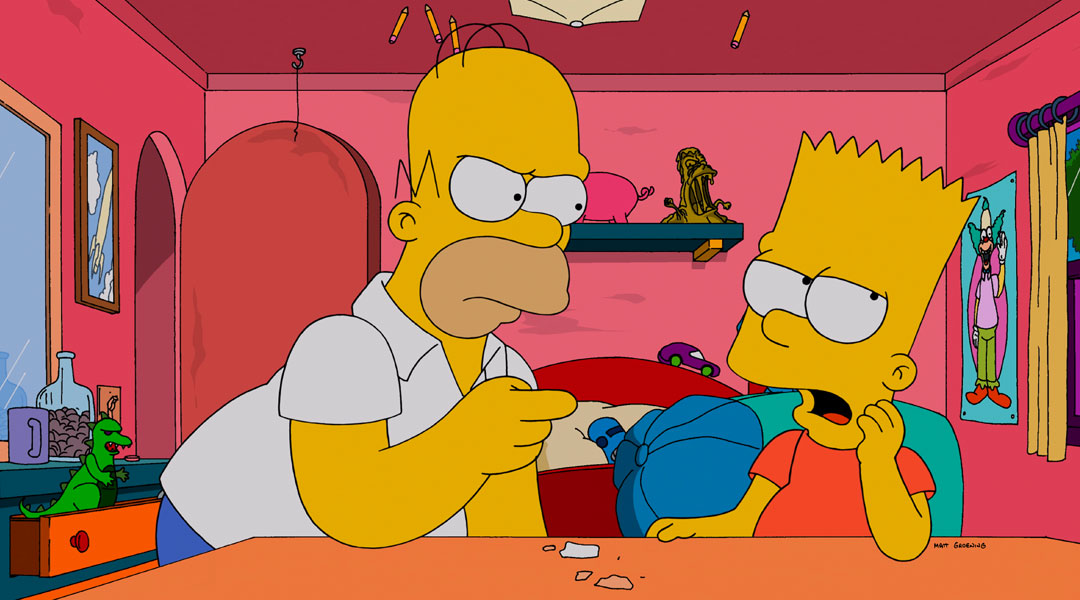 Clown in the Dumps

Krusty: My only comfort is the roast is over and will only be shown four times a day for the rest of all time.

Krusty: Have you been going to Temple?
Bart: Yeah, and I’ve learned that all religions are equally boring. Come and see.
Krusty: Kid, there’s no way you can cheer me up. Not when whiskey, good deeds and hookers failed.
Bart: Who’s a hooker?
Krusty: Uh. With me it’s easier to say which ones aren’t hookers.

Homer: Your daughterly love saved me, sweetie.
Lisa: That’s all I wanted. A tiny bit of control.

The Wreck of the Relationship

Homer: I thought we installed parental blocking software on all our computers.
Bart: I don’t know what that stuff blocks.
Marge typing: “Mammogram appointment”. {an alarm goes off}

Bart: Why do I need to eat broccoli?
Homer: So you can grow up healthy and strong, like… Randy Quaid. Yeah. Randy Quaid. He’s very healthy.

Marge: Homey! The fantasy draft just ended. I got you five kickers. It is called football, right?
Homer to Bart: You are definitely eating that broccoli.

Marge: The wifi! The wifi! I’ve got to take out the wifi! {she grabs the router and runs out of church}
Lisa: She’s under a lot of stress. Her husband’s at sea.

Eternal torture is the only punishment for the unbaptized.

Lisa: It’s true. It would be a cold day in hell when I was popular.

Teacher: Wow. Wow. That is so evil. And I know evil. I’m head of the teacher’s union.

Moog: We was narsty tastards, we were. Even though we dressed like Carole Channing’s back-up dancers.

Moog: Those punks got no respect for them what come before. They didn’t even wear no cod pieces.
Dum: How do they expect to draw the eye to their chunky wunks?

Homer: The power of Chrysler compells you!

Dr. Marvin Monroe: Simpsons, please! This fighting solves nothing.
Marge: Dr. Marvin Monroe? Are you alive or dead?
Monroe: I’m in some horrible limbo. I walk halfway through walls then I get stuck.

Lisa: Stopping Mr. Burns may be beyond the power of an eight-year-old girl who has a book report due on Beezus and Ramona, but I know someone who can help.

Maxine Lombard (Jane Fonda): As Chairwoman of this committee on Energy, Natural Resources and Blimp Safety, your fracking operation is hereby shut down.

Couch Gag
Hedonismbot: Wiggle in! Get comfortable.
Homer: Hey, a couch is a couch.

Homer: What the hell was that?
Lisa: Probably just another piece of America’s space junk falling out of orbit.
Bart: Remember when this country didn’t suck? ‘Cause I don’t.

Homer: The eyes of that picture are following me!
Bart: That’s a mirror.
Homer: Isn’t all great art kind of a mirror?

Lisa: You know, they look a little similar.
Bart: Yeah, like the guy who designed Bender just took a drawing of Dad and stuck an antenna on.
Lisa: A little lazy if you ask me.

Lisa: Wait! Stop! Why must you kill my dad? Especially when cheeseburgers are doing the work for you.
Professor Hubert J. Farnsworth (Billy West): Homer Simpson must be eliminated immediately. The creatures destroying New New York have his DNA.

Lisa: I can’t believe you’re all giving up without a fight!
Turanga Leela (Katey Sagal): Lisa, we’re just a package delivery service.
Fry: And not a very good one.

Superintendent Chalmers: Behold! Your lemons. Sociopathic child-haters who are only teachers because they got tenure after two short years.

Jack Lassen (Willem Dafoe):  …and I’ve got a full HBO special on your fat mama.
Nelson: My mom can’t afford to be fat. She’s an exotic dancer!
Lassen: Oh! And in what exotic location does she dance?
Nelson: A Touch of Class. But the C-L fell off.
Lassen: Son, there was never a C-L.
Nelson: I… I think I always knew that.

Lassen: You seem lonely and kind of weird.
Miss Hoover: You left out single.

Lisa: Look at all these monstrosities.
Homer: Lisa, how many times have I told you to bow down to our corporate overlords.

Kent Brockman: Apu and the band appeared on Saturday Night Live as the punchline of a game show sketch.
Bart: What’s a game show?
Homer: Something they make sketches about.

Lisa: Dad, you shouldn’t be jealous of Apu. Remember, it’s all about the music.
Homer: I’m not jealous. I’m envious. Jealousy is when you’re worried someone will take what you have. Envy is wanting what someone else has. What I feel is envy.
Lisa checking: Wow. He’s right.

Homer: If something great happens to one person, everyone else’s life gets a little worse. Look it up. It’s called physics!

I Won’t Be Home for Christmas

Homer: Maybe a drink will help me with my driving.

Bart: Aw, it’s Christmas Eve, man. We do not want to set a precedent for fat guys being late tonight!

Bart: They say a boy never gets over seeing his dad in a Santa suit getting hanged and electrocuted on Christmas Eve.

Marge: Well, with all that you folks have experienced, I think we could enjoy listening to a little of your wisdom.
Grampa: The problem with Puerto Ricans is—
Marge: No casual racism!

The Man Who Came to Be Dinner

The Musk Who Fell to Earth

Rich Texan: Guns are for celebrating. What do you do when you’re angry?

Moe: We’ve been singing this song like it only belonged to us. When every city in America’s had its lips on it. Even Des Moines. He spits.

Lisa: You’ve got a gift!
Bart: Don’t be so surprised. I did write that “Lisa, it’s your birthday” song.
Lisa: Yeah, with that mental patient who thought he was Michael Jackson.
Bart: Woah. Thinking back, I’m kind of surprised Mom and Dad let a crazy man spend all night in my bedroom.
Homer: Simpler times.

Comic Book Guy: Kumiko, would you still love me if I lost weight?
Kumiko: Much more!

The Kids Are All Fight