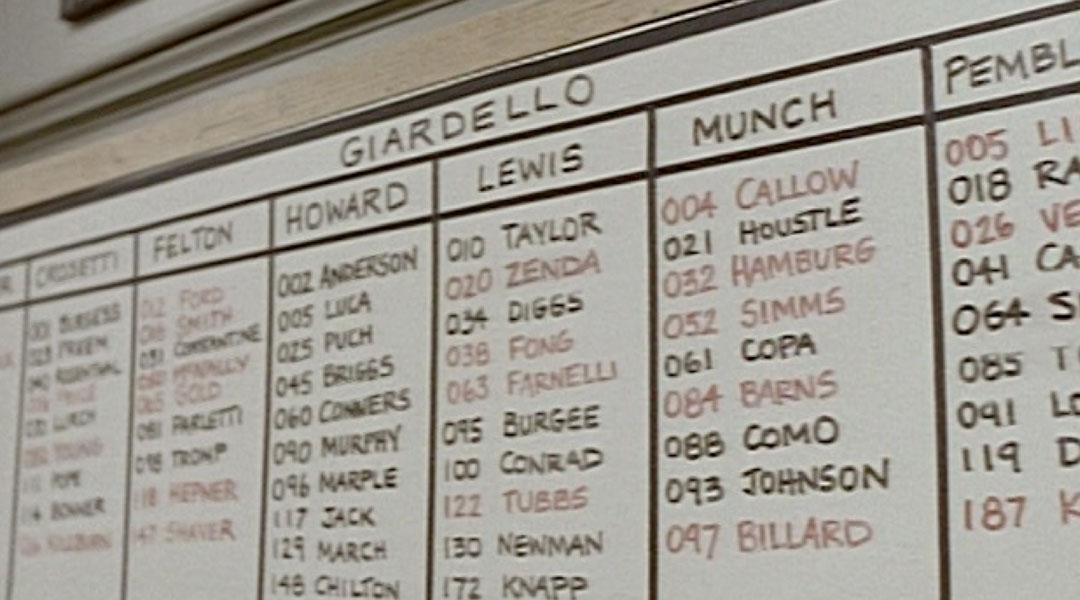 Crosetti: That’s the problem with this job. It’s got nothing to do with life.

Bernard: Okay, I was there. But I didn’t kill them.
John Munch (Richard Belzer): Who killed them?
Bernard: A Jamaican killed them.
Munch: A Jamaican? What’s his name?
Bernard: I don’t know. But he’s the one that cut me. Said he’d kill me too if I said anything.
Munch: When’d he tell you that?
Bernard: When he drove me to the hospital.
Munch: So this unnamed mystery Jay kills both Billard brothers, cuts your hand, drives you to Hopkins bleeding all over his car and swears you to secrecy along the way?
Bernard: That’s why I lied about the fence.
Munch: Okay, now I get it. You’re saving your really good lies for some smarter cop, is that it? I’m just a donut in the on-deck circle. Wait until the real guy gets here. Wait ’til that big guy comes back. I’m probably just the secretary. I’m just Montel Williams. You want to talk to Larry King!
Bernard: I’m telling the truth.
Munch: I’ve been a murder police for ten years. If you’re gonna lie to me you lie to me with respect. Now what is it? Is it my shoes? Is it my haircut. Got a problem with my haircut? Don’t you ever again lie to me like I am Montel Williams! I am not Montel Williams!
Bernard: Who’s Montel Williams?
Munch: I’m not Montel Williams. Do you hear me? I am not Montel Williams.

Stan Bolander (Ned Beatty): Is this Montel Williams someone from your neighborhood?
Bernard: I don’t know. There’s something wrong with this guy.

Mrs. Jempson: You think you guys wanna look around for some clues?
Howard: The body in the basement’s a big clue.
Beau Felton: We still have to find Jerry. {the phone rings and Kay picks up}
Howard: Hello? Detective Howard of the homicide unit. Who’s this? It’s Jerry.
Felton: You’re amazing.

Bolander: Jenny Goode was murdered, John. Someone has to speak for her.

Bernard: I’m telling the truth now. You don’t believe me?
Munch: Frankly, I liked the Jamaican story better. It had a kind of Elmore Leonard quality.

Pembleton: Look Gee, a partner is the last thing I need, the way I work.
Gee: Maybe the way you work is why you need a partner.

Lewis: He looks a little small. Like a prune or something. Don’t you think he looks heavier in the picture?
Cemetery Manager: Nobody stays fat down there.

Bolander: What’s a lady like you doing in a place like this?
Dr. Carol Blythe: Looking for Mr. Right.

Bayliss: Why do you think that this kid would be riding around in Berger’s white T-Bird when that was the easiest way to link him to the murder?
Pembleton: I don’t know, because crime makes you stupid.
Bayliss: Can I quote you on that?

Pembleton: What do you observe about the suspect, Detective?
Bayliss: Ah, let’s see. Approximately five ten, one fifty. He’s got, ah, scratches on his left chee—
Pembleton: No no no. The suspect is asleep.
Bayliss: Oh yeah. He’s been in the room for four hours.
Pembleton: Rule number four: a guilty man left in the box alone falls asleep.
Bayliss: Are there any other rules?
Pembleton: Yeah. Uncooperative. Too cooperative. Talks too much, talks too little. Blinks, stares, gets his story straight, messes his story up. There are no rules. It’s an expression.

Bayliss: So are you going to interrogate him?
Pembleton: Interrogate him?
Bayliss: Yeah, yeah. I’m just saying. You know, not a partner thing but when you interrogate him I’d like to sit in.
Pembleton: Then what you will be privileged to witness will not be an interrogation, but an act of salesmanship. As silver-tongued and thieving as ever moved used cars, Florida swamp land, or Bibles. But what I am selling is a long prison term to a client who has no genuine use for the product. {he heads for the box}
Bayliss: I guess that’s a yes.

Crosetti: It’s homicide. One thing this country’s still good at.

Munch to a would-be mugger: Hey we’re police! Go rob somebody else.

Howard: You want it? You ready? Take it.
Bayliss: Detective Bayliss.

A Ghost of a Chance

Crosetti: That’s the problem with damn sex offenders. They multiply like amoebas. Split in half—
Lewis: Look who just got released. Adison. Remember him? Career rapist.
Crosetti: Oh yeah. Didn’t he have a tattoo on his johnson?
Lewis: Yeah. “Mother.”

Griselda Battel: Is the death of Adena Keisha Watson the result of a serial killer? Five women have been killed in the Northwest vicinity over the last four months. That’s an unsolved slaying every three weeks.
Gee: We do not have a serial killer. Those deaths are totally unrelated.
Griselda Battel: We can only hope you’re right.
Gee: I am right.

Bolander: I’m on the plane and they serve lunch.
Munch: Lunch? Really? From Detroit to Baltimore?
Bolander: Yeah. I’m trying to eat my salad from my little plastic cup, and the lady sitting next to me says, “Some of the men I know think it’s perverse, but I like to make love iguana-style.”

Pembleton: You got anything you want to add, Bayliss?
Bayliss: Face of an angel.

Lewis: You got a one-track mind, leads to an empty depot.

Crosetti: There is life beyond homicide, Meldrick.

Frank Pembleton (Andre Braugher): Pardon me, my good lieutenant, but where indeed is all this extra help supposed to go?
Gee: This is a red-ball, Frank. First few hours, everyone’s around to take the credit. We have to make sure that they’re around to take the blame.

Ed Danvers (Zeljko Ivanek): As Assistant State’s Attorney I have every intention of maintaining a better-than-average conviction rate, so that one day in the not-too-distant future I can come to rest at a law firm. Preferably an L.A. law firm.
Kay Howard (Melissa Leo): Well we’ll miss you.

Howard: Danvers, don’t get me wrong. I’m fascinated by your career, but we got a red ball going on.

Barnfather: Start by replacing that rookie.
Gee: That rookie, sir, is going to surprise us all.
Barnfather: And those sneakers, Lieutenant, are not part of the dress code.

Bolander: Detective Lewis says you tend to have crabs. {she looks at him} I mean at the restaurant. He said that was your favorite.
Dr. Carol Blythe: They remind me of Sydney.
Bolander: Your ex-husband?
Dr. Blythe: My hometown.

Munch: Crabs?
Bolander: Why doesn’t a woman like that ever come on to me?
Munch: She just did.

Beau Felton: Bayliss. Out of our seven perverts, four are in jail, two have alibis and one… {turns to Howard} is actually the perfect guy for you.

Pembleton about the Araber: I already checked him out. He’s nothing.
Bayliss: Well now Mrs. Watson told me that she had Adena stop working for this guy after school because this guy was getting a little too friendly with her daughter.
Pembleton: Would you believe me on this one, Bayliss. He’s harmless.
Bayliss: He’s got a record that goes back ten years. Assault, disorderly.

Bayliss: There’s no such thing as a stupid question. At least for right now we’re gonna pretend there isn’t.

Son of a Gun

A Shot in the Dark

A Dog and Pony Show

And the Rockets Dead Glare

Smoke Gets in Your Eyes

Cop: No wonder you guys can’t solve a murder.
Munch: Well I wouldn’t solve yours.

Night of the Dead Living

Felton: We’ve been on night shift for what, a week? Every night someone lights this candle by the board.
Gee: You’re a detective. You solve it.
Felton: A homicide detective. If the candle killed someone, I’d close the case.

Munch to Bolander: Your partner Mitch? Makes love to goats.

Bolander: Dr. Blythe and my ex are as different as Saturn and Pluto.
Munch: Your head is in Uranus.

Gee: The city fathers can go to hell but they’re not taking us with them.

Bolander: When I was young, codependent relationship was a good marriage.