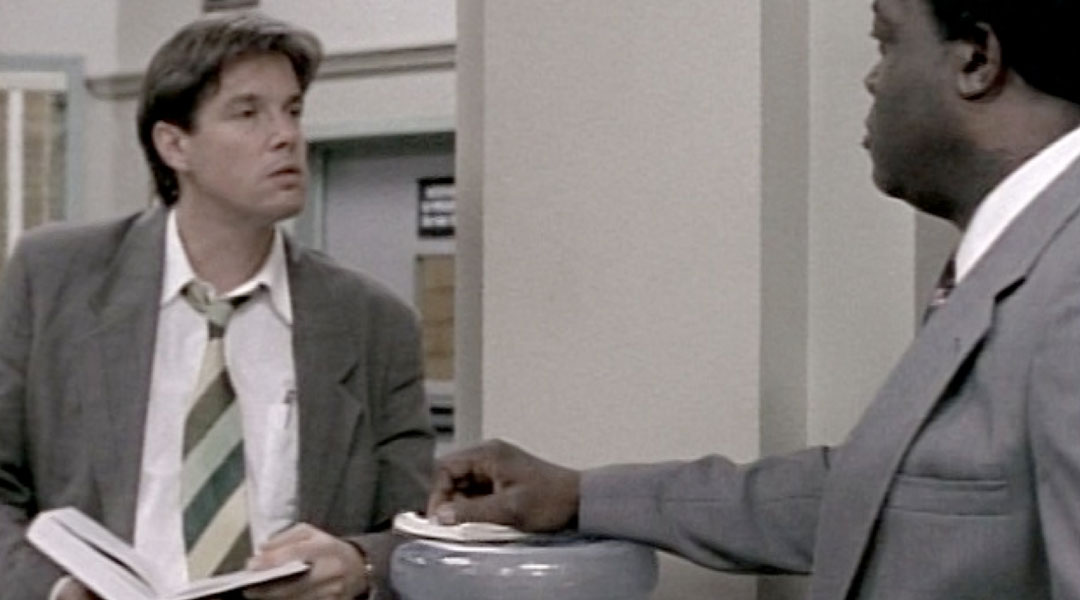 Bayliss: Why do you think that this kid would be riding around in Berger’s white T-Bird when that was the easiest way to link him to the murder?
Pembleton: I don’t know, because crime makes you stupid.
Bayliss: Can I quote you on that?

Pembleton: What do you observe about the suspect, Detective?
Bayliss: Ah, let’s see. Approximately five ten, one fifty. He’s got, ah, scratches on his left chee—
Pembleton: No no no. The suspect is asleep.
Bayliss: Oh yeah. He’s been in the room for four hours.
Pembleton: Rule number four: a guilty man left in the box alone falls asleep.
Are there any other rules?
Pembleton: Yeah. Uncooperative. Too cooperative. Talks too much, talks too little. Blinks, stares, gets his story straight, messes his story up. There are no rules. It’s an expression.

Bayliss: So are you going to interrogate him?
Pembleton: Interrogate him?
Bayliss: Yeah, yeah. I’m just saying. You know, not a partner thing but when you interrogate him I’d like to sit in.
Pembleton: Then what you will be privileged to witness will not be an interrogation, but an act of salesmanship. As silver-tongued and thieving as ever moved used cars, Florida swamp land, or Bibles. But what I am selling is a long prison term to a client who has no genuine use for the product. {he heads for the box}
Bayliss: I guess that’s a yes.

The phone rings
Howard: You want it? You ready? Take it.
Bayliss answering the phone: Detective Bayliss.

Pembleton: You got anything you want to add, Bayliss?
Bayliss: Face of an angel.

Pembleton about the Araber: I already checked him out. He’s nothing.
Bayliss: Well now Mrs. Watson told me that she had Adena stop working for this guy after school because this guy was getting a little too friendly with her daughter.
Pembleton: Would you believe me on this one, Bayliss. He’s harmless.
Bayliss: He’s got a record that goes back ten years. Assault, disorderly.

Bayliss: There’s no such thing as a stupid question. At least for right now we’re gonna pretend there isn’t.

Pembleton: You’re not Catholic and you took communion?
Bayliss: Yeah. Is that wrong?
Pembleton: If my god wins, you’re screwed.

Emma Zoole: I would love to bronze your head.
Bayliss: I beg your pardon?

Munch: What if I fail and all our dreams crash and burn?
Bayliss: It’s very simple then. Meldrick and I will harm you.

Megan Russert (Isabella Hofmann): So, Mary’s pregnant?
Bayliss: Oh no. I didn’t say that.
Russert: Frank is your partner and I’m a detective and you’re a bad liar.

Bayliss: If your husband was sentenced to death, why would you kill yourself and then orphan your son?
Pembleton: Well Tim, you’re the primary in this quickly deepening quagmire. I’ll leave that question for you to answer.
Bayliss: Thanks. I hope you get polyps.

Gee: He refused counsel.
Bayliss: Yeah.
Gee: Did he give a reason?
Pembleton: He says he’s not guilty of anything.
Gee: Everyone’s guilty of something. I want a confession.

Kincaid: The doctors check Rausch?
Pembleton: Yeah, he’s fine. And in his cell where he will be staying.
Kincaid: If you win.
Pembleton: No, I’m sure of it. I bribed the judge. I told her Bayliss would have sex with her for a favorable ruling.
Kincaid: You two-timing pig.
Bayliss: Well, she was naked underneath those black robes.

Bayliss: What is wrong with a grilled cheese sandwich?
Pembleton: It’s so… you know. So white boy.
Bayliss: White boy?
Pembleton: American cheese? White bread? You know what I’m saying? It’s a non-statement.

Pembleton: It was a grilled cheese. Get a grip.
Bayliss: It wasn’t the sandwich, partner.

Bayliss about Nettles: He thinks because he didn’t actually kill anybody he should be going up on lesser charges. Which proves, once again, crime makes you stupid.

Bayliss: You remember Adena Watson?
Howard: Oh, sure. Your first case. Never shut.
Bayliss: Yeah. Risley Tucker, the Araber I always suspected of killing her, he’s dead. You know, she’s eleven years old and she’s raped, murdered and mutilated and he dies peacefully in bed. At home.
Howard: Risley Tucker’s dead so you’re thinking about quitting, huh?
Bayliss: I can’t stop thinking about that case. I can’t stop seeing Adena Watson’s face in the rain. The wounds on her body.

Pembleton: The job does suck the life out of you.
Bayliss: Yeah, that’s not the only thing.

Bayliss: Those other guys are like a family. I have never ever felt that in Homicide. We are the best, the elite. But we are not a family.
Pembleton: Yes we are. But we’re like a real family. Opinionated… argumentative. Holding grudges. Challenging each other. We challenge each other to be better than we are. That kind of thing doesn’t happen at barbecues… ball games. It happens at the job where it’s supposed to. On a case. Putting down a murder. The work itself is the most important thing. What we do is important. We speak for those who can no longer speak for themselves. And you’re not gonna ever find anything like that anywhere. Not in Vice and not patrolling the grounds at Disneyland.

Pembleton: So. You gonna leave?
Bayliss: No. Not until I close the Lambert case.

Pembleton: I don’t remember being a child.
Bayliss: Of course not, Frank. ‘Cause when you were born you were already thirty-five years old.

Bayliss: She’s got the face of an angel. She looks just like her. Just like Adena Watson.

Bayliss: Two young girls. Same ages, same race. Serrated edge knife. Now we never found the weapon in the Adena Watson case. There’s a connection here, Gee. I can feel it.
Gee: So why are you sitting at your desk?
Bayliss: Right.
Gee: Go with your gut, Bayliss. But use your head.

Bayliss: Frank you get her in The Box and you find out what she knows.
Pembleton: I only have one question to ask her: What were you doing running out of the alley. She says, I don’t know what you’re talking about. She’s right. I don’t know what I’m talking about.
Bayliss: So you ask your question, Frank. So what?
Pembleton: Look, you bring someone in The Box with no ammunition, it just toughens them up. You get nothing, they walk away confident and if they do know anything it makes it that much harder to get it out of them the second time around,
Bayliss: You think this is the mistake we made with the Araber, right?
Pembleton: Maybe.

Bayliss: You know, something? I keep seeing her face. Everywhere. Adena Watson. You want to hear something terrible? I think I’m starting to hate her.

Pembleton: I have my share of open cases.
Bayliss: It was my first case. He beat me. The killer beat me. The Araber, Dooley, or whoever he is, he beat me. I hadn’t even started being a homicide detective yet, and I had lost. Don’t you see, Frank? I let myself care about that case and for what? I put everything that I had into that and it wasn’t enough.

Bayliss: What makes you think he was murdered?
Richard Laumer (Terry Kinney): I told him I would kill him.

Bayliss: If something does happen to me, I want you to go right after their asses.
Pembleton: Is this before or after I buy the house in St. [?]?

Bayliss: The Cold War is over. The world has changed.
Laumer: Oh yeah? Is that right? What, did a little birdie come up and tell you that? The War ain’t over. It’s only half-time.

Gee: Go home and enjoy that precious baby girl of yours. That’s a direct order, Frank.
Bayliss: Can I come?
Pembleton: Come where?
Bayliss: To see the baby.
Pembleton: You’ve seen the baby already.
Bayliss: I know, but I love babies.
Pembleton: Then have one of your own.

EMS: He’s having a CVA.
Bayliss: What the hell is a CVA?!
EMS: Stroke.

Bayliss: I am good murder police, aren’t I, Gee.
Gee: Yes. Of course.
Bayliss: I’ve been standing here, thinking about Frank, thinking about everything I’ve learned from him in the last four years.
Gee: His technique in The Box?
Bayliss: Ah. No, it’s more than that. You know when I find a suspect I like to get in their brain, find out why they would wanna take another person’s life. Why. Now Frank. Well, Frank, he just sees a dead body. It doesn’t matter to him who they were, what they did. He strips away their personalities, he makes them all equal in death because if they have been murdered they must be avenged. Forward without hesitation, without any kind of moral dilemma. His mind’s so clear on that Gee. His mind… You know I think I’ve finally started to understand how his mind works. I just don’t know if I’m gonna be as good of a detective as I am without him.

Bayliss: I’m a detective, Frank. I’m a keen observer of the human condition. I pick up on the subtlest clues, I react to the slightest suggestion. In short, I deduct.
Pembleton: Who told you?
Tim Bayliss: Brodie.

Kellerman: You sure you want me with you?
Bayliss: Yeah sure, why not?
Kellerman: I don’t know. Uh, last time we worked together you were kind of snarky.
Bayliss: Snarky?
Kellerman: Yeah, snarky. You know, from the ancient Greek, meaning butthead.

Bayliss: Look, it’s not a permanent thing. I’m not asking for a long term commitment.
Munch: I understand. You stayed with Pembleton for six years. He broke your heart, and now you’re just looking for a one-nighter, huh?
Bayliss: Yeah, something like that.