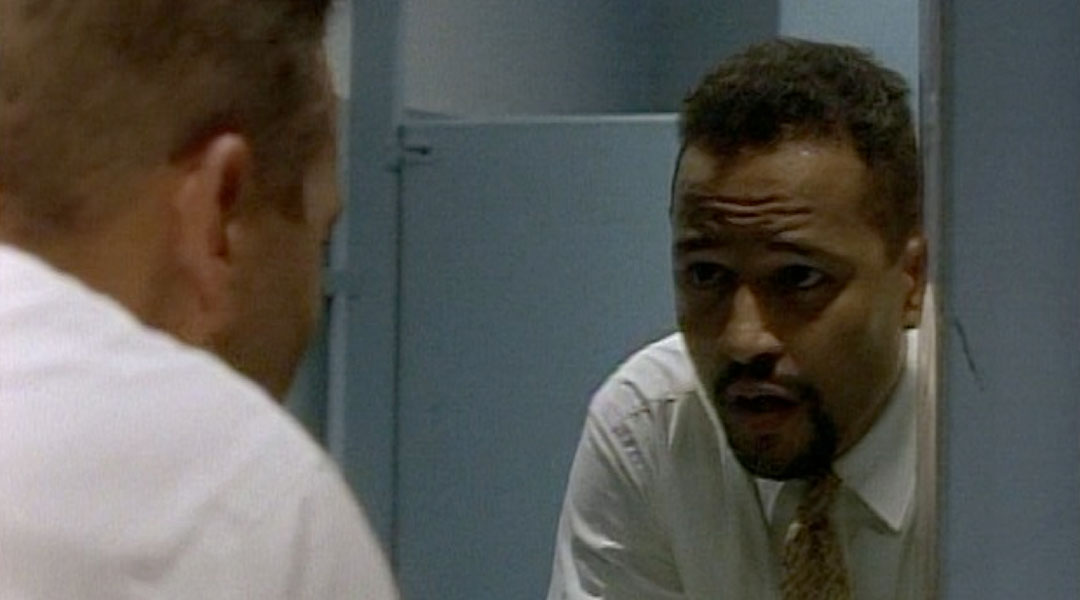 Lewis: He looks a little small. Like a prune or something. Don’t you think he looks heavier in the picture?
Cemetery Manager: Nobody stays fat down there.

Crosetti: That’s the problem with damn sex offenders. They multiply like amoebas. Split in half—
Lewis: Look who just got released. Adison. Remember him? Career rapist.
Crosetti: Oh yeah. Didn’t he have a tattoo on his johnson?
Lewis: Yeah. “Mother.”

Lewis: You got a one-track mind, leads to an empty depot.

Lewis: You go when you’ supposed to go, and everything else is homicide.

Lewis: Hey, look. It’s Mr. Sunshine!
Everyone: Frankie!
Pembleton: Oh, no no no. I’m tired of being the only one around here who gives a damn. You’re looking at the new Frank Pembleton. Budding Republican and practicing selfish bastard. Savior of no one but himself. {to the bartender} Shot of Gold Natty Bo. This is the new me.
Russert: Careful, Frank. You know some day you’re going to run for mayor and rue those words.

Rodzinski: Now Russert, she was double-demoted from Captain and what I hear about Munch he’s some kind of ex-hippie or something.
Meldrick Lewis (Clark Johnson): They’re good cops.
Rodzinski: That’s not what I’m saying.
Lewis: Then what are you saying?
Rodzinski: I want to find out who murdered my father and I don’t want this investigation to get hung up, you know? It’s gotta be done right.
Lewis: It’ll be done right.
Rodzinski: Will you make sure of that?
Lewis: Yeah, I’ll make sure of that.

ME Diane: You ordered a crime scene, gentlemen.
Lewis: Crime scene. More like a dump job to me. No pun intended.

Lewis: Well the good news is I have no problem whatsoever chopping this squirrel off.
Kellerman: What’s the bad news?
Lewis: Kenny Damon. It’s the son of a bitch that killed Jake Rodzinski’s father.
Kellerman: Oh man. The boss is gonna be all over our ass. We better take our time and do this scene right.
Lewis: Most definitely. Okay, Cecil B. DeBrodie. Start videotaping away for posterity.

Lewis: Names stay red on that board all the time. Why not Damon?

Lewis: Did Bayliss ever mention to you that he was thinking about maybe leaving homicide?
Russert: No.
Lewis: Nah. Hm. Me neither. I guess he only confides in Kay.
Russert: So that’s what’s going on.

Lewis: Why don’t people tell me their life stories on trains? Why didn’t Bayliss open up to me? And Crosetti. I mean, I had no idea that Crosetti was going to kill himself. My own partner and I have no idea that he’s in that kind of pain. Why didn’t he come to me?

Kellerman: Basically he was trying to resign from the United States.
Lewis: You can do that?
Kellerman: You can try.

Lewis: Why steal one boot?

Lewis: I don’t know. Full moon over the New Moon Motel. Gotta mean something. That’s why you gotta catch the break, you know? Get the luck that you deserve served up to you on a big ol’ silver platter.

Lewis: These people ain’t got nothing to do with that murder.
Kellerman: Yeah. So?
Lewis: So why’d you make them wait in here?
Kellerman: Because they’re illegal.
Lewis: Last time I checked your badge didn’t say INS on it.

Lewis: Imagine that. Closed case we didn’t mean to close.

Lewis: I guess you didn’t happen to find a stray boot around here, did you?
Jennifer Wells: One thing I do remember about the man is that he liked to go around wearing just one boot. The man used to say, “Not every shoe has a mate.” He was weird. Even back then.

Lewis: Looks like we got us a potential red ball here.
Kellerman: Looks more like a gutter ball.

Kellerman: Come on, Meldrick. Stay on the boat tonight.
Lewis: I love you, man. But I’m not in love with you.
Kellerman: Seriously. You don’t want to be alone.
Lewis: I got no problem being alone, Kellerman. I’ve been alone most of my life.

Lewis drops the red bowling ball off of the bridge into the water
Kellerman: You know. That ball was evidence. I’m going to have to go fish it out.
Lewis: Have fun. I’m gonna go find my wife.

Lewis: …He told me, don’t you ever let some knucklehead stand on your corner and shame you. ‘Cause once you’ve done that, you’re done as a beat cop. So what he suggested I do, was that I take out my billy club and smack him upside the head so hard that everybody who heard it knows who had the last word. Luther, you’re on my corner.