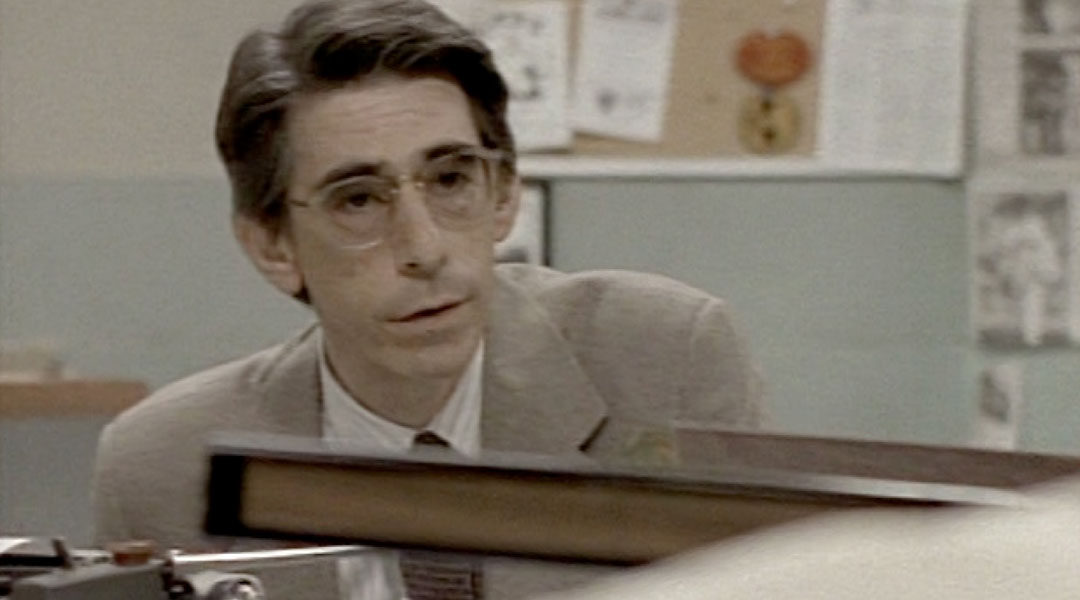 Bernard: Okay, I was there. But I didn’t kill them.
John Munch (Richard Belzer): Who killed them?
Bernard: A Jamaican killed them.
Munch: A Jamaican? What’s his name?
Bernard: I don’t know. But he’s the one that cut me. Said he’d kill me too if I said anything.
Munch: When’d he tell you that?
Bernard: When he drove me to the hospital.
Munch: So this unnamed mystery Jay kills both Billard brothers, cuts your hand, drives you to Hopkins bleeding all over his car and swears you to secrecy along the way?
Bernard: That’s why I lied about the fence.
Munch: Okay, now I get it. You’re saving your really good lies for some smarter cop, is that it? I’m just a donut in the on-deck circle. Wait until the real guy gets here. Wait ’til that big guy comes back. I’m probably just the secretary. I’m just Montel Williams. You want to talk to Larry King!
Bernard: I’m telling the truth.
Munch: I’ve been a murder police for ten years. If you’re gonna lie to me you lie to me with respect. Now what is it? Is it my shoes? Is it my haircut. Got a problem with my haircut? Don’t you ever again lie to me like I’m Montel Williams! I’m not Montel Williams!
Bernard: Who’s Montel Williams?
Munch: I’m not Montel Williams.

Bernard: I’m telling the truth now. You don’t believe me?
Munch: Frankly, I liked the Jamaican story better. It had a kind of Elmore Leonard quality.

Munch to a would-be mugger: Hey we’re police! Go rob somebody else.

Bolander: I’m on the plane and they serve lunch.
Munch: Lunch? Really? From Detroit to Baltimore?
Bolander: Yeah. I’m trying to eat my salad from my little plastic cup, and the lady sitting next to me says, “Some of the men I know think it’s perverse, but I like to make love iguana-style.”

Munch: Crabs?
Bolander: Why doesn’t a woman like that ever come on to me?
Munch: She just did.

Cop: No wonder you guys can’t solve a murder.
Munch: Well I wouldn’t solve yours.

Gee: to Munch I want the paperwork on that double-suicide. I don’t care if it’s in rhyming couplets. I want it finished.

Munch to Bolander: Your partner Mitch. Has sex with goats.

Munch: What if I fail and all our dreams crash and burn?
Bayliss: It’s very simple then. Meldrick and I will harm you.

Munch: If a murder is committed in Baltimore and no homicide detective takes the call, did that homicide actually occur?

Munch: You’re either divorced or you hate who you’re married to.
Det. Lennie Briscoe (Jerry Orbach): Ah, divorced. You too?
Munch: Me three.

John Munch (Richard Belzer): Finding a dead body in a cemetery is kind of redundant, don’t you think?
Megan Russert (Isabella Hofmann): I don’t like cemeteries.
Munch: Any particular reason?
Russert: I don’t wanna talk about it.

Rodzinski: Now Russert, she was double-demoted from Captain and what I hear about Munch he’s some kind of ex-hippie or something.
Meldrick Lewis (Clark Johnson): They’re good cops.
Rodzinski: That’s not what I’m saying.
Lewis: Then what are you saying?
Rodzinski: I want to find out who murdered my father and I don’t want this investigation to get hung up, you know? It’s gotta be done right.
Lewis: It’ll be done right.
Rodzinski: Will you make sure of that?
Lewis: Yeah, I’ll make sure of that.

Munch: I gotta ride around with you all day, you’re gonna make me feel guilty.
Russert: You’re going out of guilt?
Munch: Yes. Guilt is almost as good a motivator as fear.

Kellerman: You don’t think much of me, do you?
Munch: Actually I have no opinion of you one way or the other. You have yet to appear on my radar screen.

Kellerman: New Orleans is great.
Munch: Yeah, if you like drunks, dirty politics, hurricanes and Zydeco.

Munch: I don’t like to get attached to people. They have a tendency to get suspended or throw china at me.

Munch: Anything I can do to help?
Pembleton: Yeah how about a little luck?
Munch: I’ll get back to you on that.

Munch about Carver Dooley: The guy is the dimmest bulb I’ve ever seen. I’m beginning to think he didn’t do it.

Russert: Do you know where Elwah is now?
Ian McKenzie: Sure. Do you want me to write down the address where he’s hiding?
Munch: That would be nice.

Cox: Don’t you even wonder why?
Munch: Why what?
Cox: Why he lied.
Munch: I’m a Homicide Detective. The only time I wonder why is when they tell me the truth.

Pembleton: It’s too quiet in here. The only thing dead are the phones.
Munch: It’s New Years Eve, Frank. When that ball drops the bodies will start dropping.

Munch: Mean Streets? What, are you ripping off Scorsese?
Brodie: I wasn’t ripping him off. I respect the man, but he doesn’t hold a candle to the great documentary filmmakers like Robert Frank or Kenny Baker, Maysles Brothers, Ken Burns.
Munch: Oh yeah. Ken Burns. He’s the only guy ever to manage to make something more boring than a baseball game. A documentary about baseball.

Munch: Without metaphors, what are we left with? We have a riddle, surrounded by a mystery, wrapped inside of an enigma and stuffed inside a body bag.

Munch: Hey partner, ready to roll?
Kellerman: I gotta run to the dentist; I cracked a filling.
Munch: Which part do you hate the worst? The rubber dam they put in your mouth to open it or the sound of the drill?
Kellerman: I think the worst part is when I scream like a little girl.

Bayliss: Look, it’s not a permanent thing. I’m not asking for a long term commitment.
Munch: I understand. You stayed with Pembleton for six years. He broke your heart, and now you’re just looking for a one-nighter, huh?
Bayliss: Yeah, something like that.