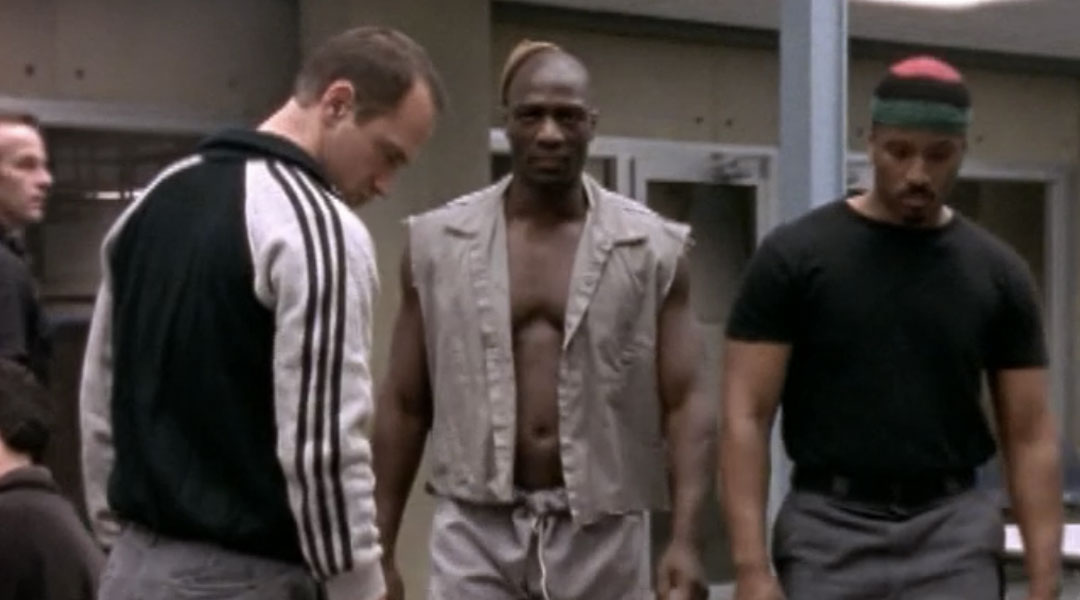 Nathan: You need to cut those fingernails.
Beecher: I will. As soon as I get back to my pod.

Keller: Look, what I did was wrong. I’ve been trying to figure out a way to prove to you that I’m truly sorry. And I do love you.
Beecher: How about I fuck you in the ass?

Beecher: How stupid do you think I am? You let me break your legs… and then you snitch on me.
Keller: I won’t. I swear.
Beecher: Swear. Promise. Take an oath, make a vow. Then go fuck yourself.

Keller: Hey, fuck you, ya fuck.

Claire Howell: You were right about Tim McManus. He’s dreamy.
Wittlesey: I don’t recall ever saying Tim McManus was dreamy.

Keller: You know… you know what went on between us, right?
Sister Pete: I know that Tobias was in love with you and that you broke his arms and his legs.
Keller: Jesus Christ, you put it that way it makes me sound so cold.
Sister Pete: So why don’t you rephrase it so you come out the hero?

Beecher: Never considered that, huh? That it could’ve been me, standing in the dark in that storage room, watching you stack copying paper. And then, boom, boom, baby!
Keller: Toby, was it you?
Beecher: No. But for a second, you believed it could have been. It could have been good ol’ Toby.
Keller: You didn’t kill Metzger.
Beecher: Nah. How could a little pussy bitch like me hurt anyone?
Keller: Beecher, if you weren’t in the storage room, how did you know I was shelving copy paper?
Beecher: Hmm… I dunno. Shit, maybe it was me.

Beecher: You’re wondering what I’m going to do to the son of the guy who double-fucked me.
McManus: It crossed my mind.

Wangler: Miguel, how it feel to get your ass whipped by a faggot?
Alvarez: You better watch your fucking mouth.
Wangler: Whatcha you gonna do? Hit me with your purse, motherfucker?

Beecher: I wouldn’t mind a four way with Nooter and Pecky.
Ryan: What?

Keller: But the end of the day when you go home and your bed is empty…
Sister Pete: It’s not empty.
Keller: Oh, I forgot. God’s waiting there for you. You’re the bride of Christ.

Ryan: Yo, Vern!
Keller: How you doing?
Beecher: Came to get some exercise. Work up a sweat.
Andy Schillinger: They’re gonna teach me how to wrestle.
Schillinger: That’s fine. We’ll just stand here and watch.

Beecher: Tsk, tsk, tsk… Vern, you need to adjust your attitude. If not, I got no reason to keep being the good friend to you that I am.
Schillinger: Good friend?
Beecher: Yeah. If not for what I have done, then for what I haven’t.
Schillinger: What’s that?
Beecher: I haven’t fucked him. At least not yet. You see, because I was there for Andrew when he needed someone, holding him—comforting him—I think he’s developed a little bit of a crush on me. I have been tempted to at least deep tongue him a couple times, but I knew that would upset you so I haven’t. Even though he wants me to stick my dick up his ass. And I’m afraid one of these nights, he and I alone in our pod, I’m not gonna be able to control myself.
Schillinger: You’ll be dead before you get the chance.
Beecher: Well, you better hurry. Keller’s getting horny and O’Reily’s been talking about a three-way with Cyril and Andy.

Schillinger: Those are not the kind of men you should be hanging out with.
Andy: As opposed to who? Those standup individuals that make up your merry little band? You know, I gotta tell you something, Dad, my whole life you crammed into my head how superior we white folks are. Well I don’t see the truth in that. Hey, I look around this room and I see white faces and black faces, every color in between. The only thing that I know for sure is that we’re all shit. Shit don’t come in degrees. I mean, white or black, shit is shit. So fuck everything you believe in, fuck everything you stand for, and fuck you.

Beecher: When are you gonna figure it out? You and me. We’re never gonna happen.
Keller: You love me, Toby.
Beecher: standing up Fuck my ass.

Hill: Life in Oz sucks, and only a fool or a Republican will tell you different.

Margarita Ricardo: You don’t understand!
Wittlesey: If I had a nickel for every time I didn’t understand you’d be talking to an empty chair.

Hill: Twas the night before Christmas and all through the house, not a creature was stirring, not even a mouse. The rats, on the other hand, is a whole different story.

Beecher: Keller, I just asked McManus to let you be my roommate again.

Murphy: Life’s full of disappointments, O’Reily. I think you would’ve grasped that by now.