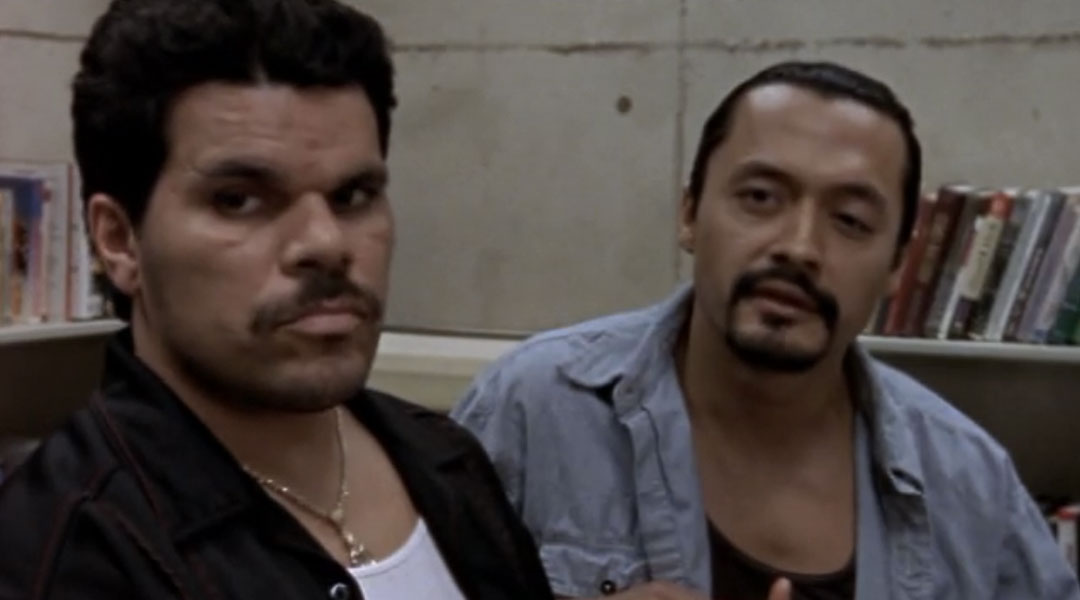 Dino Ortolani: Hey. Let me give you a slice of advice. Get yourself a weapon. Anyone tries to fuck with you, take ’em out.
Tobias Beecher: Anything else?
Dino Ortolani: Yeah. Don’t smile. Ever.

Kareem Said: I would give my life for you.
Jefferson Keane: You gonna have to.

Michael Healy: Well, your brother’s a fag, Keane. They say it runs in families. You a fag, too?
Jefferson Keane: Why don’t you suck my dick and find out?

Groves: They say lethal injection causes no pain. How do they know? Did someone come back from the dead and say they didn’t feel anything?

Ryan O’Reily throwing something at Auerbach: We want Sister Pete.
Carlton Auerback: Uh, she’s not here. So, uh, today, we’re gonna be…
Kenny Wangler: lunging at him Shut. The. Fuck. Up!

Glynn: L’Italien. The Supreme Court refused to hear your appeal.
Richard L’Italien: Rehnquist is a fag.

Schibetta to Adebisi: How do you keep that hat on your head? Velcro?

Said: I am willing to share the power. That is why I asked you here. You see, we can become a kind of council. We will—together—make all the decisions.
Ross: We can talk parliamentary procedure later. How many guns do you have?

Scott Ross: Any last words?
Tim McManus: Suck my dick.
Scott Ross: If only there were time.

McManus walks into the cafeteria that Kenny is mopping
Wangler: McManus! You’re fucking up my floor, McManus!

Richie knocks on the door.
Mukada: Come in. Richie. pause What’s up?
Richie Hanlon: I love to take it in the ass.
Mukada: Uh huh.
Richie Hanlon: Now lots of people think that’s perverse, but it’s my choice. So I say fuck them, right?
Mukada: Richie, are we going someplace with all this?

Kareem Said: I understand you have some information regarding the governor James Devlin. Information of a damaging nature.
Jiggy Walker: Damaging? Depends on how you view crack.

Antonio Nappa: Needless to say, I was saddened by Peter Schibetta’s rape. His father Nino and I were paisans. I’m Peter’s godfather. Glynn and Mcmanus exchange looks No, his actual godfather. At baptism.

Wangler: It’s fucking what I heard Rebadow collected like 3Gs. And that money’s gone tomorrow. Know what? I’m thinking we go to Rebadow, we take the dough, and so these other fucks don’t get mad, we make Rebadow swear he sent it.
Adebisi: No.
Wangler: What do you mean, “no”? It’s $3,000.
Adebisi: I said no.
Wangler: Why?
Adebisi: ‘Cause sometime it’s good to be human.

Wangler: Miguel, how’ it feel to get your ass whipped by a faggot?
Alvarez: You better watch your fucking mouth.
Wangler: Whatcha gonna do? Hit me with your purse, motherfucker?

Hernandez: You know, I want to see Alvarez dead. I don’t know why, you know? It’s like one of those reflexes you get when they tap you on the knee and your leg shoots up.

Wangler: Miguel, how it feel to get your ass whipped by a faggot?
Alvarez: You better watch your fucking mouth.
Wangler: Whatcha you gonna do? Hit me with your purse, motherfucker?

Schillinger: Those are not the kind of men you should be hanging out with.
Andy: As opposed to who? Those standup individuals that make up your merry little band? You know, I gotta tell you something, Dad, my whole life you crammed into my head how superior we white folks are. Well I don’t see the truth in that. Hey, I look around this room and I see white faces and black faces, every color in between. The only thing that I know for sure is that we’re all shit. Shit don’t come in degrees. I mean, white or black, shit is shit. So fuck everything you believe in, fuck everything you stand for, and fuck you.

Guerra: Fuckin’ Alvarez. He’s got more lives than a cat.

Busmalis: Being free, even for a few hours, was so wonderful. I mean, I had no money, no overcoat. It was cold out there. But man, oh man, I was so happy. I stopped in the middle of the street and did a little dance. gets up and dances Of course, that’s when they caught me.

Jack Eldridge: What do you do before lights out?
Cyril: Wait.
Eldridge: For what?
Cyril: The lights to go out.

Ronnie Barlog: So I guess I’m on the bottom?
Beecher: Unless you want to be on top.
Barlog: No, no. I’m good with the bottom.

Fred Wicke: Other than the lice, I feel great. I’m thinking maybe I’m one of the five that got the placebo. suddenly falls facedown on the table and dies.

Timmy Kirk: If you’re not part of the solution, you’re Satan’s tool.

Rebadow: So Norma was here again today?
Busmalis: So we’re both in prison?
Rebadow: Excuse me?
Busmalis: I’m sorry. I though we were asking questions that we already knew the answer to.

Cutler: You and me? We’re gonna spoon. Now bend the fuck over.

Alvarez: Yo, I’m as bugged out as you. I mean, I know you guys spent a lot of time with Cutler. Did he ever mention anything about me?
Robson: Yeah. In his sleep at night he’d whisper your name. Fuck off.

Torquemada: I have a little confession. You see, I’m a virgin. I’ve never had sex with man, woman, fish, or fowl.

Torquemada: I don’t want to fuck you. That would be too common. I want to be you, Miguel Alvarez.