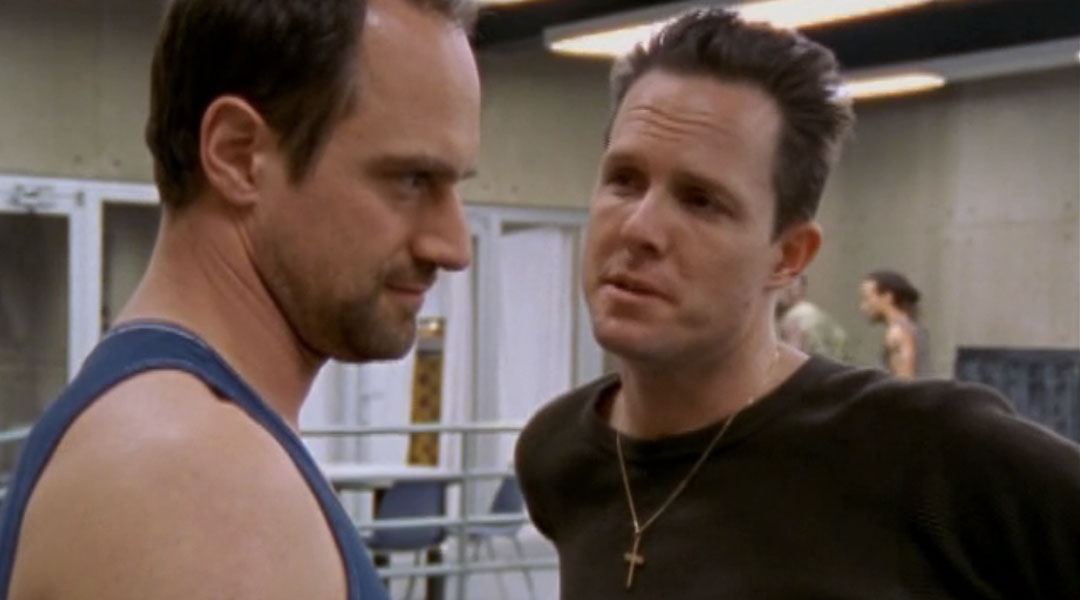 Murphy: So, what do you call a guy that eats his own flesh?
McManus: Inventive.

Guerra: Fuckin’ Alvarez. He’s got more lives than a cat.

Keller: You know what? Oz didn’t make you a bitch. You were born one.

Murphy: Beecher, we had a major incident here, all right? And now we’ve lost Tim McManus. Your boyfriend’s health ain’t a priority for me.

Hernandez: You know, I want to see Alvarez dead. I don’t know why, you know? It’s like one of those reflexes you get when they tap you on the knee and your leg shoots up.

after Beecher and Keller are reunited
Howell: That was such a touching moment, I’m gonna write about it in my diary.

Keller: Hey, man, they stab me, they shoot me, I ain’t going down.

Stanislofsky: You Americans think that just because you have democracy you’re better than everybody else. Elections are not what makes a country great.
Ryan: Yeah? And what does? Vodka?

Busmalis: Being free, even for a few hours, was so wonderful. I mean, I had no money, no overcoat. It was cold out there. But man, oh man, I was so happy. I stopped in the middle of the street and did a little dance. gets up and dances Of course, that’s when they caught me.

Beecher: Let me ask you something. What should I do if I ever find out who killed Gary?
Keller: You should whack him. I’ll help you.
Beecher: Yeah?
Keller: It’d be my pleasure.

Howell: What the fuck you doing with a cigarette, Pancamo?
Pancamo: Smoking it?
Howell: Put it out now, or I’m coming in there.
Pancamo: Now her I’m afraid of.

Beecher: You gotta forgive me.
Keller: No.
Beecher: I forgave you.
Keller: Well I guess that makes you the better man.

Mondo Browne: Hey, Keller, man, I gotta ask you a question, man. You mind if I fuck your girlfriend Beecher? You mind if she sucks my cock?
Keller: I don’t give a fuck what you do or what he does.

Lawyer: I didn’t decree the system, Moses. I just wallow in it.

Said: Don’t hate yourself.
Beecher: Why not? My son is dead because of me. My daughter’s a mess because of me. And Keller… Keller doesn’t love me. But I tried this new detergent, it really seems to get the whites clean.

Keller: My relationship with Beecher. It started with brutality, it’ll end in brutality.

Beecher: I didn’t kill Shemin.
Adebisi: Yeah, but you fucked him, though.
Beecher: Once. He was lousy. Browne slams Beecher’s head down So were you, Mondo. Browne slams his head again.

Keller: Well I see you fucking all these other guys.
Beecher: You said you didn’t care who I fucked.
Keller: Well I do. I do, okay?

Keller: You should take care of where you stick your dick. That baby is lethal.
Beecher: You know, I liked it better when we weren’t speaking.

Logan: All these incidents involved two other prisoners, Christopher Keller and Vernon Schillinger. Tell me about your relationship with them.
Beecher: We sing in the choir together.

Lisa Logan: Is there a lot of homosexual activity?
Keller: Well, by “homosexual” do you mean deep-rooted love of one man for another, or guys fucking guys in the ass?
Logan: Ass-fucking.
Keller: Shit happens.

Logan: Tobias Beecher.
Keller: What about him?
Logan: I don’t know, you tell me.
Keller: We sing in the choir together.

Jack Eldridge: What do you do before lights out?
Cyril: Wait.
Eldridge: For what?
Cyril: The lights to go out.

Murphy: The fourth estate is gone.

McManus: Now, when you violate a rule, instead of sending you to the hole, we’re going to stick you inside that cage. In full view of your adoring public. Any questions?
Keller: Mr. McManus, sir, how big is your penis?

Keller: Wait a minute. You fucked Howell?
Ryan: Mm hm.
Keller: You don’t just drop a nugget like that without a few details, O’Reily.

playing chess
Keller: My esteem for you has risen 69 percent. But tell me, as one manipulative turd to another, now did you fuck Howell for the sex, or to get her to do some other kind of nasty?
Ryan: Just the sex. Check.

Robson: What’s the matter? Don’t think that’s funny?
Said: No. But you? You’re a joke.

Schillinger: Will somebody tell him we can take care of Said ourselves? We don’t need to sub-contract.

Keller: Beecher. That your little brother I saw you with in the visiting room? He’s cute. He fool around?

talking about Barlog
Beecher: He’s cute. Does he like to fool around?

Ronnie Barlog: So I guess I’m on the bottom?
Beecher: Unless you want to be on top.
Barlog: No, no. I’m good with the bottom.

Robson: Hoyt, we agreed I’d do the talking. Let me do the fucking talking.

Beecher: Keller.
Keller: Oh, are we speaking? I thought we were trying to fuck with each other.

Fred Wicke: Other than the lice, I feel great. I’m thinking maybe I’m one of the five that got the placebo. suddenly falls face down on the table and dies.

Robson: Your kid was involved in all kinds of shit. Drug deals, pimping. So there’s any number of people who might want him dead.
Schillinger: This is you consoling me?

Beecher: Why are you doing this?
Keller: I would have thought that was fairly obvious.
Beecher: Yeah.

Beecher and Keller kiss.
Keller: I’ll see you.
Beecher: When?
Keller: Back here. Or in heaven.
Beecher: You really think we’re gonna get into heaven?
Keller: Ah… you and me together? God doesn’t have the balls to keep us out.

Edward Gallson: As long as we understand each other. Fucking faggots are ruining the military. “Don’t ask, don’t tell,” my ass.
Beecher: I agree. You know, I think the military should stay the way it’s always been—a bunch of redneck He Men who murder children and rape women.
Gallson: You making a joke of me?
Beecher: Seems like you’re doing a pretty good job all on your own.

Clayton Hughes: I hereby declare this the Republic of Huru!