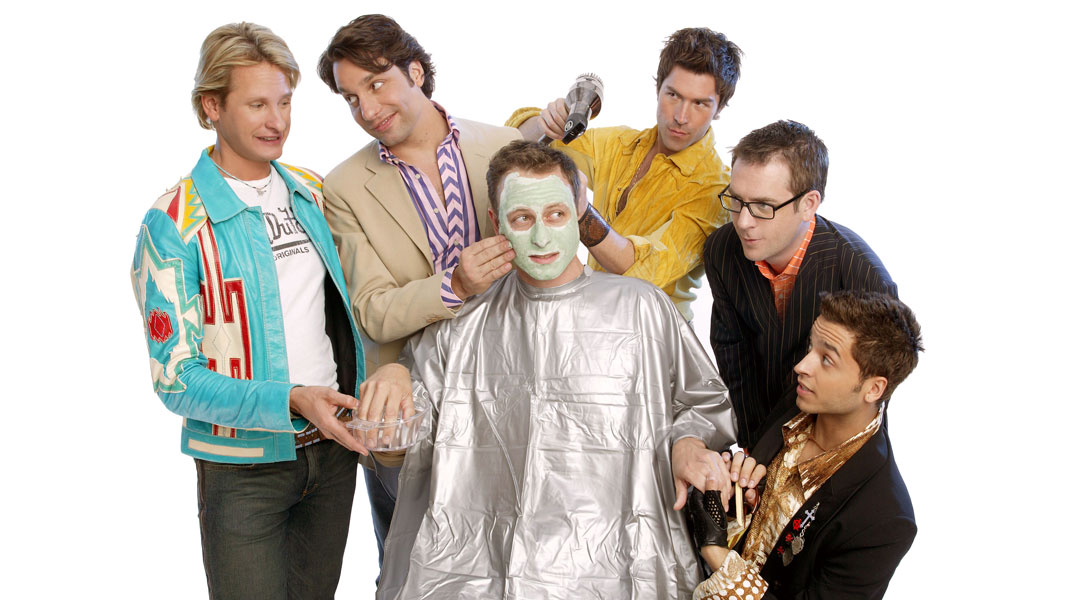 Ted: You dip the dog in Kool Aid?
Joni: No. You put it in water and then wash him.
Ted: Ah. I thought he tasted good.

Carson: This suit actually exploded on stage? It was probably God’s will.

Max about the sofa: This is great too.
Thom: Isn’t it? And it’s comfy.
Max: We’re gonna have sex right here.
Carson grabbing Max: Okay.

Kyan: But wait a minute. Isn’t that a boy dog?
Max: Kitty works in drag. Kitty’s real name is Bruno.
Ted: No dog’s genderidentities were harmedin this production.

Thom: These are total Vegas outfits.
Carson: Do I look like Liberace threw up on me?
Thom: The jacket looks like the interior of an old Studebaker.

Ted: Carson’s been arrested by Roman guards!
Carson: A funny thing happened on the way to the forum shops.

Carson: Does it get any better than this? First gowns and now shoes. Later I’ll dip you in chocolate.

Ted: If the family gives you any static, just remind them how much money you saved them.
Carson: And then blame Jai.

Thom: This is like your bachelor party. Unfortunately, it’s with five gay guys.
Carson: And we have a donkey.

Kyan: This is very… apartment complex chic. Without the chic.

Thom: What about all this stuff on top? These stuffed animals?
Elaine: They’re sentimental.
Thom: They are? They’re sentimental? Like enough to be in the livingroom, not in the bedroom or guest room or the office or a closet or a box in the garage or storage out on the deck?

Thom: Hey Ted. What do you think about these curtains?
Ted: Um, it looks like a really cheap wedding dress that exploded.
Thom to Elaine: Well he’s a real bitch. I was just going to say they weren’t that cool.

Kyan when Ed talks with the interviewer: Oh, my God, is this story over yet?

Ted: There he is…
Kyan: Yay, Thom Filicia!
Ted: Thom’s the only one who’s actually drinking already!

Carson: You are suffering from the post-collegiate tee-shirt syndrome. PCTS. Not to be confused with post-traumatic stress disorder. Which I have after looking at this.

Carson yelling out the window: Hey! Are you single?
Thom: No. He’s just annoyed.

Thom sitting on Jeff’s lap: We’re trying to get you a date and here you are—
Jeff: I like older men.
Thom: Older! Oh my god! You’re in so much trouble.

Ted: Thom’s style is really masculine, oddly enough. Considering what a flamer he is.

Jai: All of us are very different. We don’t fit one specific stereotype.
Ted: Except for Carson.

After fitting into a t-shirt with Tyson Beckford
Carson: Fantasy #400: fulfilled.

Carson manipulating the girlfriend’s tattoo: Did you see her tattoo? Her skin art? I’m trying to make it wink but it just won’t do it.

Jesan gets his sunglasses stuck in his hair
Kyan: You and your damn eyewear, Carson!
Carson: No, it’s your hair! You got your hair in my eyewear!
Kyan: You got your eyewear in my hair!

Ted: Hey Kyan, look. The word of the day is legs. Spread the word.
Kyan: That’s terrible.
Ted: Didn’t you ever go to junior high school?

Carson: Put the tramp in trampoline.
Ted: I think you’ve done that already.

Thom: So you’re his squire. Now what would be under a squire?
Squire: His wife.

Ted about the backyard jousting: Does anybody ever tell you guys that this is kind of weird?

Ring Guy: There’s a lot of shaving and trimming that needs to be done.
Carson: Yeah, and not just on the ring.

Thom: Welcome to the Knights of the Round Coffee Table!

Thom about the heraldic pants: Unless he finds a witch and a wardrobe I don’t think he should wear that.

Carson about Tani’s reaction: “Oh my.” That’s another word for “I hate it.”

Ted: You guys collect some strange things.
Anna Marie: I like frogs.
Ted: Oh my god, I just got a menu idea.

Thom: Ted and I went to a pre-gay course once. Ted got not-so-straight As.

Carson: You look like a gay bank robber. “Give us all of your sweaters!”

Kyan: We have handwriting like a woman, don’t we?

Justice of the Peace: It is a tradition here on our beautiful island of Bermuda to have witnesses—at least two witnesses.
Ted: And so we brought you Jimmy Buffet.
Carson: And Kato Kaelin.

Thom: Is this the shared space for the both of you?
Miles: It’s the common room.
Carson: Yeah, it’s pretty common.

Miles about his status at college: They changed my sex from female to not reported.
Carson: Talk about an undeclared major.

Kyan about the air bed: It needs a little air. My ass is touching the floor right now.

Ted: My dad always took me to bars, but the track is good too.

Jai: Hey, we get to do three guys!
Everyone: Hey!
Carson: Our first three-way!
Kyan: Well, I don’t know about first.
Carson: Well there was that one time on Fire Island.

Thom: I took the plastic off. And I really believe that this material is like an outdoor fabric. I don’t think it’s going to stain it.
Everyone: Oh boy.
Thom pouring a little sauce on it: Just a little. trying to wipe it up Nope. It’s not stain resistant!

Peter Jr.: Did I put too much stuff in my hair? I gotta wash it.
Kyan: What the hell? You’re kidding me! You are kidding me. He’s washing his hair with some sort of hand soap in the sink while his family is downstairs waiting for him. This is a first.

Thom: All I can say is that Peter Sr. did an amazing job at doing nothing.

Thom: None of this furniture is worthy of the amount of stairs you had to carry it up.

Thom: Let’s find a table for him to sit at. Look at this one. This is waterproof and breathable.
Ted: Which you really want in a table. I think this was supposed to be on a sweater or something, and some joker stuck it on a table.

Carson: Oh my god, your skin is the same color as bologna!

Ted: Adam looks like he’s in prison now and wants to kill himself.

Kyan about the mini grill: Look at this, Ted.
Ted: Let’s smell it. smells it. Regretting.
Kyan: Regretting. There’s a nice layer of carbon on it.

Ted: This doesn’t make me gay right?
Todd: Does this make me gay because I’m in the middle?
Carson: No. Your hair on the other hand is another story.

Thom: Do you eat this [Macaroni and Cheese]?
The Brother: I will. But the difference is that I’ll have one bowl. Todd will have two bowls and, like, sprinkle some, like, Ranch dressing in there and see what happens.
Jai cringing: Ugh!
Thom: So he’s more of a chef?

Carson weighs in
Carson: No, I am not 172. Someone’s standing on the scale!

Carson about the display belts on faux grass: This is the belt shown in its natural habitat.