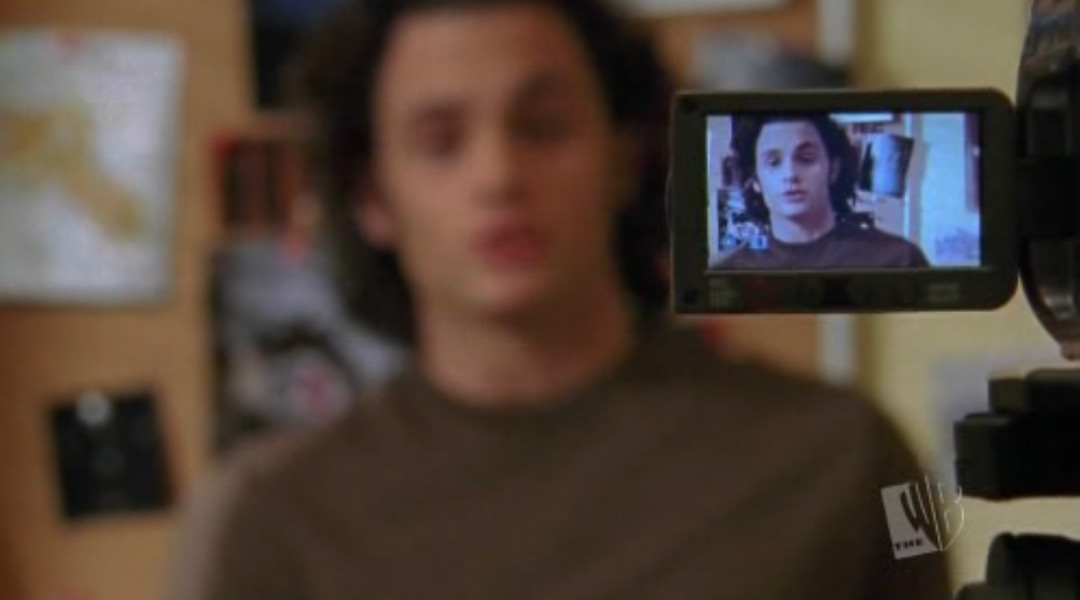 Richard: After the little fandango with the sex advice column I did a little soul searching. You’ll be reading a kinder, gentler Bugle.

Professor Macklin: This week’s video diary topic: Have you ever—knowingly—manipulated someone, sexually or otherwise? Have you ever been manipulated? What is it about sex that makes otherwise moral, decent people lie. Like there’s no tomorrow.

Sarah: My problem in the past, I thought I could get everything I needed from one man. Now I know: niche dating is the key to happiness.
Owen: Niche dating?
Sarah: Yeah.
Owen: How come when I do that you call it whoring around?

Natalie: You can call me, you can talk to me…. I’m not gonna break.
Richard: I might.

Jake: Hey there, Dean. Can I look at your sports section?
Dean Harold Harper: Be my guest. I haven’t touched the New York sports section since they slandered Reggie Miller in ’95.
Jake: Sometimes I think the Knicks are trying to kill me—me, specifically—the way they’re playing.

Owen on the phone: It doesn’t really matter if it says “antiseptic” on the
bottle. You shouldn’t really be cleaning an open wound with mouthwash. Especially down there.

Erin about Owen: He’s so cute. With that little wave and all.
Natalie: Yeah, so cute. Except naked. He has a vestigial tail. Some kind of birth defect. It’s actually pretty disgusting. Wags when he gets excited.

Richard in a class discussion: …and by the time the dust is settled, Cro-magnon realizes that he’s had his ass handed to him by a younger, stronger, quicker and more manipulative Neanderthal.
Jake: Yeah, the Cro-magnon probably just picked up a club and beat the Neanderthal’s head in.
Everyone laughs.
Owen: What the hell are we talking about?
Sarah: I don’t know.

Jake leaving a message: Hello Katrina. It’s Jake. I guess I got your voicemail. Listen, um, you left your umbrella in my classroom. The fact that you left it has interesting Freudian connotations. So let me know what you want me to do with it. I can drop it by or you can come pick it up or I can just throw it away. Call me.

Dean Harper: What are you doing here? Aren’t you supposed to be on a date?
Professor Bonatelle: Date’s over. Never go out with a man who voted for Ralph Nader. Twice.
Dean Harper: I’ll remember that.

Jake: The moment Katrina and I met, it was nothing else but loving her. The passion was…
Professor Bonatelle: Indescribable, apparently.

Natalie: Did you just ask me out?
Owen: Yes, I did. Badly, but yes.

At the art gallery:
Natalie: Funny how Donald Rumsfeld looks a lot more cuddly made of pasta.
Zoe Lopez: There’s something less threatening about him.
Owen: Let’s face it. You put some cheese on this guy, he is downright yummy.