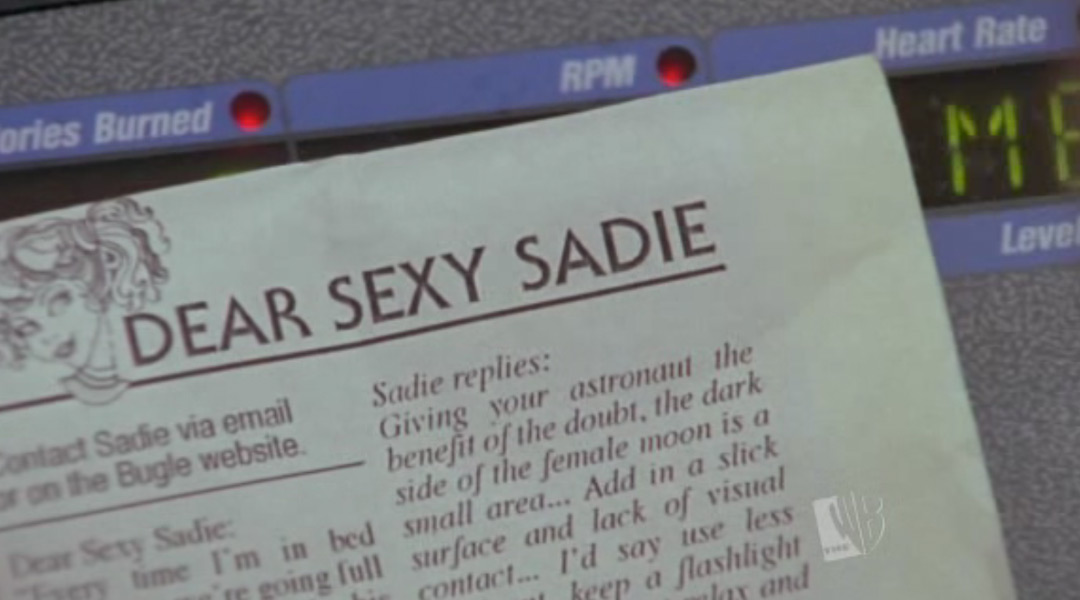 Chris: I’d be working on biceps, bro.
Lee: What’s up, Chris.
Chris: You’re gonna need your strength. Baby in one hand, books in the other.
Lee: Baby? Who told you that?
Chris: Who told me? Who told everyone. Sexy Sadie.
Lee: The column in The Bugle?
Chris: “You can bitch about condoms all you want, but falling in glove can save you grief. Take this lesson from a certain art history major in Macklin’s sex seminar. This freshman won’t only be studying nativity paintings, but he’ll be in one.”

Macklin: We have a problem. This class was intended as a sacred space. A place where we could discuss sex and sexuality openly. A place where we were all each other’s confidants.
Lee: And one of you blabbed to the school’s newspaper.
Natalie: Well not necessarily.
Lee: How else did the columnist find out?
Natalie: I don’t know. Maybe Sadie overheard someone talking about you.
Lee: Yeah well, let’s ask Sadie.
Richard: Hey look, I’ve already told you I’m not the columnist and I’m not the leak.
Macklin: But you are the editor-in-chief. You’re responsible for content.
Richard: Absolutely. But I didn’t feel there was anything wrong with it. No one is mentioned by name.
Lee: Yeah, so the only people who know are my friends. Which is worse.
Richard: How am I to know that you didn’t tell the columnist?
Macklin: You should have asked.
Natalie: Lee, maybe you mentioned the pregnancy to someone else in another class.
Lee: No.
Sarah: What about your girlfriend Rachel? Did she tell anyone?
Lee: Rachel doesn’t even go to Bedford.
It doesn’t matter

Macklin: Look, the truth is we may never know how Sexy Sadie found out. What’s important now is that we regain trust in each other. The first step. Lee, I believe you when you say you never told anyone besides this class about the pregnancy. And Richard, I believe you when you say that you’re not the leak.
Richard: Thank you.
Macklin: So who is the leak? If it’s someone in this classroom I’ll ask you to stand up, admit it so we can collectively move on.

Macklin: Alright. No one stood up. So I believe that none of you betrayed Lee’s confidence.

Natalie: So this morning you were in Macklin’s hot seat.
Richard: Yeah. My ass has cooled off. So will the controversy.
Natalie: You know I’m glad you’re off the drugs and the booze, but, I mean in a way you’re still an addict. You are just not happy unless you’re pushing somebody’s buttons.
Richard: That’s classic. You know this is what happens to every psych major. You turn a nice conversation into the “Freud Factor.” Look, do me a favor. Don’t analyze me, please? Unless I’m paying you.

Macklin: You have that bounty hunter look. What’d I do this time?

Bonatelle: Bottom line, Richard. We’ve had a meeting with some of the members of the board of trustees and they want you to kill the column. They provide a third of your funding.
Richard: That money does not give them the right to dictate content. I mean The Bugle has always had autonomy.
Bonatelle: They yank your funding, and you don’t have a paper to run. You’d just be hurting yourself, the rest of your staff—
Richard: You’re asking me to go against journalistic principal?
Bonatelle: I admire your journalistic integrity, but not your editorial judgment.
Richard: Sean Dixon’s no longer a threat to female students, because of my editorial judgment. No one seemed upset when The Bugle exposed his private affairs. You know, with all due respect, the three of you and the board should be buying me a round, not try to censor me. Tell the board that I will fire the columnist, but I’m not going to kill the column. He storms out.
Dean: That went well.

Richard: The truth is, Professor Macklin, I know who the leak is. But I can’t tell you. Because I was told in confidence. It’s a secret. And sacrificing trust in order to restore trust, it’s not the way to go at this point. There is a secret though that I can share. I never read the column. Before it went to press. I mean I skimmed it for content, but I missed the reference to Lee. Now the bigger question is, had I read it, would I still have published it? I don’t know.

Dean: We are a heartbeat away from being listed in Maxim Magazine’s Top Ten Party Schools.

Zoe coyly: So what’s this about? Wanna do a centerfold of me?
Richard: I know you’re the one who told Peter Wortman about Lee.
Zoe: Well. I guess I shouldn’t be surprised that little weasel sold me out. Twice. Are you going to tell Macklin?
Richard: No. But you should.
Zoe: I can’t.
Richard: Macklin’s all about trust. Redemption. Forgiveness. You confess, he’s going to hold you up as a poster child for emotional healing.
Zoe: No, I can’t, alright? Macklin’s more than just a teacher to me. He met my mom ten years ago at an outreach program education in the Bronx. He’s kind of been looking out for me. And this will all blow over anyway.
Richard: No. It won’t. I know that you and Lee hooked up. Maybe you felt taken advantage of, kind of pissed.
Zoe: And out of revenge I told? Nah. It was nothing like that. Lee and I were cool.
Richard: Okay. Next class I’ll stand up and I’ll say I was the leak.
Zoe: Why?
Richard: Because this thing has taken on a life of its own. And no one in that seminar is going to say anything real or honest until they know who spilled. And I can take the heat. Most of the class can’t stand me anyway.
Zoe: Well. I guess you gotta do what you gotta do.

Richard: Would I put my integrity on the line because of a ridiculous sex column? No. It’s not exactly a noble cause, but it’s the cause that I have. And I have to take my stand.