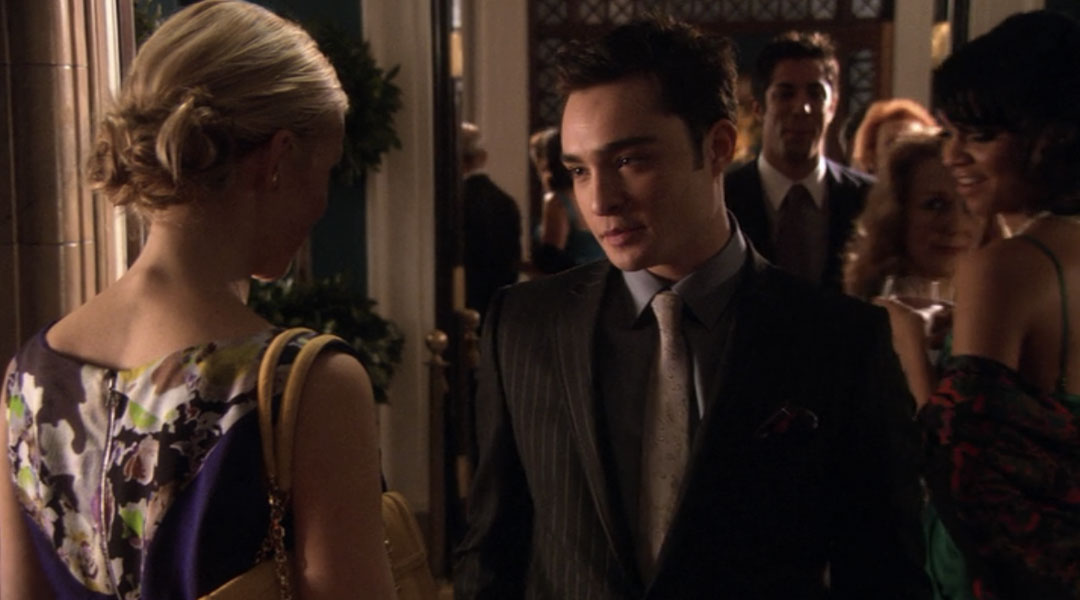 Blair: Settlements are for the guilty. Celebrities that run people over. The Catholic Church. It’s not fair.

Lily: How are things going with Jenny?
Rufus: We have an understanding. She goes to school, she comes home, she does not date boys with pills.
Lily: I’m sure she’s furious.
Rufus: The Hulk was furious. There’s no word for what Jenny is.

Serena: You know what’s really attractive about a bad boy?
Nate: No. I really don’t.

Gossip Girl: There’s always a moment a father can’t let himself fear. The day his little J decides to lose her big V.

Rufus: Lil, I think this morning has been a step in the right direction. But I’m not quite in the mood to celebrate any of your former husbands right now.

Jack Bass (Desmond Harrington): I would have been here sooner but I got distracted reading some of those protester’s signs. I never realized how many puns you could make out of the name Chuck Bass.

Serena: I called him and invited him over for lunch.
Nate: What, are you crazy? You said last time you were alone with this guys he tried to rip your clothes off.
Serena: And he’ll try to again. But this time you and Jenny are going to walk in right in time to catch him.
Nate: This sounds absurd.
Serena: Blair and Chuck do it all the time.

Dan: You know, Dad, I think every girl goes through a forbidden guy phase. It explains why vampires are so popular right now.

Gossip Girl: Uh oh. Looks like this Virgin Queen’s next accessory will be a chastity belt.

Rufus: You’re going to dream of the days when you were just grounded.

Chuck: If you are who you say you are, then you won’t mind me doing a DNA test, right?
Elizabeth (Laura Harring): I should have known you would never let me in. You are your father’s son.

Gossip Girl: Looks like the protestors outside aren’t the only ones who think Bass is an ass.

Lily walks over to Chuck and gives him a big hug
Chuck: I have a feeling you’re to thank for the turn out tonight.
Lily: Well they support you. None of us believes slander.
Chuck: Well thank you. That means more to me than you know.
Lily: Did you come here alone? I thought you would bring Blair and maybe someone else you wanted me to meet.
Chuck: I’m solo tonight.
Lily: Me too. They hug again
Chuck: Thank you.

Serena: Look, whatever your twisted guy logic is, there’s no reason to go behind my back with Jenny.
Nate: Serena, I woke up the morning after I lost my virginity to find that the person I lost it to—the person I loved—had left town. Never to be heard from again for a year. So yeah. I had a good reason.

Jack: You look glorious as always.
Rufus: How dare you come to an event you know my wife is at.
Jack: Rufus. Don’t blow a gasket. I just came to offer my apology. Lily, I wasn’t myself that night at the opera gallery. I’d had a lot to drink, took some of those over-the-counter pills they started keeping behind the counter recently, and some meth.

Jenny: Go away, traitor.
Nate: Look, I’m sorry I called Rufus, but it was for your own good. You’re a really special girl, Jenny, who deserves a guy who’s gonna see that. You know? Who’s gonna be there in the morning.
Jenny: Not like you’re available.
Nate: Jenny, Damien got aggressive with Serena at the state dinner.
Jenny: Shows what you know. Damien only hit on Serena to get her to take off the opera jacket with the drugs in it.

Gossip Girl: Looks like Little J is about to do some dirty dancing of her own.

Doug (Kelly AuCoin): Actually, things have taken a turn. We’re getting attacked by Christian Conservatives.
Chuck: We have those in Manhattan?
Doug: The Family Travel Council is organizing the boycott. You’d be shocked how much influence they have.
Chuck: That’s the kind of thing that would only entice my target clientele.
Doug: I don’t think the business has the luxury of waiting around to see. I’m sorry, Chuck. For PR if nothing else, it needs to seem that you’re no longer in charge. You need to hand over operations of the hotel. At least temporarily. Perhaps a family member.
Jack: I’ll do it.
Chuck: Doug. Give us a moment. Doug leaves. I promise you, Jack. That will never happen.
Jack: Then I’ll wait. And when your beloved hotel is bankrupt and empty I’ll swoop in, give you fair market price. I’m sure there’s some copper pipes I could salvage.
Chuck: This was your plan wasn’t it?
Jack: No. But I’m totally going to reap its rewards. You took what was mine, now I’m taking what’s yours. At least you know it’s staying in the family.

Blair: What’s wrong?
Chuck: A boycott. Doug says I have no choice but to sign my hotel over to someone else. Jack nominated himself.
Blair: Of course he did. I can take over.
Chuck: I don’t think signing the hotel over to my nineteen-year-old girlfriend would ease the public’s mind.
Blair: What about Lily?
Chuck: She’s Bass Industries. The last thing I want is my father’s company bailing me out.
Blair: I don’t see what choice you have. What’s that?
Chuck: DNA results. Looks like I have another choice.

Jenny: Damien, where are you going?
Damien (Kevin Zegers): I knew you were just a kid.

Lily: Hello, Mother.
Cece (Caroline Lagerfelt): Lily, it’s been six months. Time to check back in with the good Doctor van der Woodsen.
Lily: Can’t we get someone else to do the tests? I mean does it really have to be him?
Cece: You know it’s the right choice. And it’s been too long already. Please darling, for me?

Chuck: What are we celebrating? The lawsuit? The scandal? Or the fact that I just signed over my hotel?
Blair: We’re celebrating you. Opening your heart to your mother. And me. Being the woman who encouraged you to do it.

Gossip Girl: And just like that: Chuck Bass celebrating a new love.

Jack: Well. Do we have ourselves a hotel?
Elizabeth: We do.