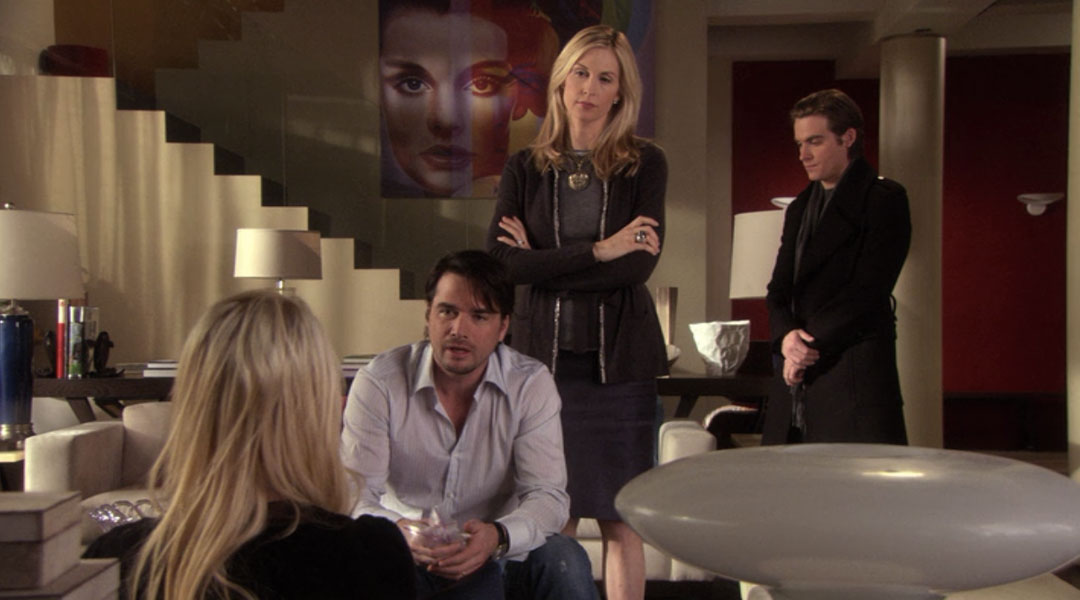 Gossip Girl: Get up and go at it, Upper East Side. I hear Little J is having foreign relations with a handsome attaché. We always knew she had friends in high places, but how low will she go?

Jenny: Not that I don’t love popcorn and a movie, but I mean it’s Saturday night. I wanted to go out.
Damien (Kevin Zegers): We are. In fact we have half a dozen deliveries to make at some parties.
Jenny: Again? You’re the only dealer in town?
Damien: No rest for the wicked.

Serena: Since when do you cook?
Nate: Honestly, I didn’t even know we had a fridge until this morning.

Blair: Haven’t you ever heard of knocking?
Serena: I did knock. But you didn’t hear me. We heard you though.
Blair: Oh. Was it awkward?
Serena: Are you trying to prove some point?
Blair: Yes. But I shouldn’t have to. I’m just glad I got Chuck’s couch scotch-guarded.

Blair: What are you doing?
Nate: Ah, my phone’s dead. I was going to use Chuck’s.
Blair: There’s a phone in the livingroom.
Nate: I know. I wanted to check a tweet.
Serena: Wait, Chuck asked you to grab his phone when he called, didn’t he?
Blair: Chuck called?
Nate: No. I mean yeah, he called. But he was just wanting me to put his phone in his briefcase so he didn’t forget it.
Blair: Oh god, I miss that.
Nate: What?
Blair: Dating someone who’s a horrible liar. It’s so much easier.

Serena: Who’s Elizabeth Fisher?
Chuck: Her name used to be Evelyn. And she’s my mother.

Gossip Girl: And just like that, we get the mother of all questions.

Nate: Chuck, how is that even possible? Bart told you your mother died.
Chuck: He also told me that kids wear suits to kindergarten and that blue chip stocks were great for birthday gifts. He told me what I wanted to believe.

Serena: What are we going to do?
Blair: Nothing. You didn’t see his face when he confronted her and she sent him away. He’s had enough pain in his life. If he doesn’t want to hear her story then I’m going to respect that. And so are you.

Melissa (Carrie MacLemore): So how long have you and Vanessa known each other?
Dan: Oh, we’ve been best friends since we were kids.
Melissa: I was actually talking to Paul.
Vanessa: Right. Of course. Paul and I met at a cabaret last semester and the theme was fairy tales. So it’s only appropriate that I met my Prince Charming.
Paul: Actually, Dan was Prince Charming.
Vanessa: Where did you and Dan meet?
Melissa: In the hallway, actually.

Chuck: A Blair Waldorf apology without a caveat. Sounds serious.

Chuck: Even if she is my mother, she isn’t. It doesn’t change anything. The past belongs to the past.

Rufus: Jennifer, pack your bags or I will!
Jenny: Alright fine. I’ll do it myself.
Lily: Rufus, can we please talk about this?
Rufus: No. We can’t. You know while she’s packing her stuff maybe I’ll grab what’s left of my own.

Gossip Girl: Careful, S. You may think you know what’s best. But this time you might just be pushing your Chuck.

Serena: I’m going over there.
Blair: Serena. Sit your ass down.

Gossip Girl: Watch your step, Little J. Damien may be your drug of choice, but this looks like bad medicine.

Rufus: Did you know about this?
Lily: No, Rufus. I did not know about a giant bag of pills.

Jenny: Okay. So let’s get it over with then. Am I grounded for life? Military school? What?
Rufus: Probably both. But this goes way past that, Jenny. See, I look at you. And I don’t see my daughter anymore.

Chuck: You were looking for a fairy tale ending. Next time rent a movie. Leave me out of it.

Serena: I just wanted him to have answers.
Blair: Please. You and I both know why you did this and it has nothing to do with Chuck.

Gossip Girl: Well S, looks like Chuck’s mom isn’t the only one with baggage.

Gossip Girl:There comes a time when every father learns you can’t keep a bad girl down.

Serena: I think talking to Elizabeth made me realize that he just didn’t want to be found.

Elizabeth (Laura Harring): I thought it would be better if you could hate me. But I think it’s better if you know me. I’ve decided to stay in New York. I’m willing to wait as long as it takes. I want to know my son.