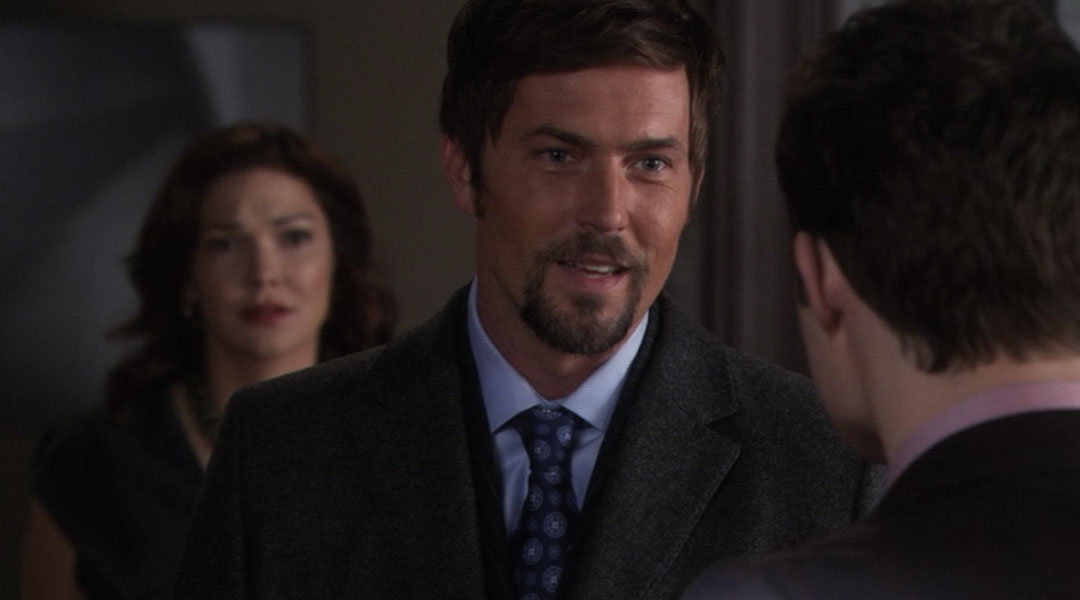 Gossip Girl: They say the clothes make the man. But who makes the clothes? On the Upper East Side, it’s Eleanor Waldorf. And we hear her new line is to die for.

Jenny: Dad, the last time I worked for Eleanor it didn’t exactly end well, remember?
Rufus: But I also remember that my daughter used to love working in fashion. C’mon, at least give it a shot. Your room’s not going anywhere.

Blair: There’s something about waking up the morning of a fashion show, the smell of pleats wafting through the city.
Chuck: Nothing quickens your blood more than haute couture.

Chuck: Victor. Is everything alright?
Victor (Eric Engleman): Mr. Bass, you need to vacate the premises immediately.
Chuck: I think you’ve misunderstood. I may have put my mother in charge for the time being but I’m not leaving the hotel.
Victor: Actually, sir. These orders come from her.

Eleanor (Margaret Colin): My. Look who’s risen from the dead.
Jenny: I just wanted to say thank you so much for this opportunity. And I’ve really learned a lot since the last time we worked together and… I won’t let you down.
Eleanor: Well, despite our troubled past, as I told your father I’m a firm believer in second chances. I even rehired your friend.
Agnes (Willa Holland): Jenny.
Jenny: Agnes. Uh. Hi, how are you?
Agnes: Ninety days sober in AA.
Eleanor: Good for you. Now c’mon Jenny, what are you waiting for? Get Agnes fitted. I like to see my elves busy. Clock’s tickin’!

Dorota: Miss Blair you have no friends. Even NYU minions very second rate.

Elizabeth: Chuck!
Chuck: Did you send security to kick me out?
Elizabeth: Just listen. I—
Jack: No. Let me. Morning, Nephew.
Chuck: What is this leech doing stuck to my hotel?
Jack: Your hotel? This is Elizabeth’s hotel. You’re just a guest who’s no longer welcome here.
Elizabeth: I’m sorry, Chuck. You need to leave.
Chuck: What? Wait. What the hell is going on here?
Jack: Isn’t it obvious? You’ve been played, Chucky. From the very beginning.

Gossip Girl: We hear Chuck’s hotel is hanging on by a thread. And Jack’s pulling all the strings.

Agnes: What is it?
Jenny: Nothing. Ugh. Well. Truth is I was dating this guy named Damien and he was a lot of things. One of them being a dealer.
Agnes: Was he Sid to your Nancy? That’s awesome.

Blair: Chuck, are you okay?
Nate: Hey. What’s going on?
Chuck: It would appear we’ve all been players in a Jack Bass production. The reappearance of my mother, the lawsuit. It’s all been part of an elaborate ruse to get me to sign over my hotel to Elizabeth. You have to admire his handiwork.

Gossip Girl: Careful J. The show’s about to start. And it looks like Eleanor’s line is going to bring a whole new meaning to high fashion.

Blair: What? My mother said she wanted me to pack the crowd with wholesome American girls.
Serena: So you hired escorts? B, you couldn’t just tell your mom you don’t have friends at NYU?
Blair: Prostitutes are people too. And they have a lot of disposable income.

Agnes: You know I think it’s time for Little J to say goodnight.
I thought you wanted to wait until the after party.
Agnes: No. Let’s put her to bed early.

Elizabeth: Underneath it all he’s a kind, loving person.
Chuck: What kind of loving person would convince you to do this to me?

Elizabeth: I need Jack. And I believe he needs me too. He loves me.
Chuck: If you believe that, then you deserve whatever happens next.

Chuck: It’s over. The Empire is gone.

Rufus: Son, I have to tell you. This date is a disaster. What’s going on?
Dan: She has this idea that we’re stuck in a rut, and she’s trying to break us out of it.
Rufus: A rut? You just started dating.
Dan: I know.
Rufus: Look, the two of you just need to talk this through. She’s Vanessa, you’re Dan. You guys are best friends…. Did she just leave?
Dan: Mm hm.
Rufus: Oh.

Blair: You whore and a half! Conwell was about to buy my mother’s junior line until you!
Brandeis: Blair, I didn’t cruise Mr. Conwell.
Blair: Then how does he know you’re a prostitute?
Brandeis: He doesn’t. He knows Julian is. He’s supposed to see him tonight in fact. Julian and Conwell party every time he flies into town. I’m really sorry, Blair. We had no idea there’d be clients here tonight. It was a total surprise.

Gossip Girl: Spotted: Little J passing out in a taxi. Uh oh. Looks like somebody better call the fashion police.

Blair: Mother, what are you doing? We can close this.
Eleanor: No. It was a stupid idea to begin with. I don’t know what I was thinking. I would rather lose a deal than lose myself. “Never hide who you are.” Remember that, hm.
Blair: Everyone at NYU hates me.
Eleanor: What?
Blair: I have minions of course. But they’re hardly even worthy of the name.

Eleanor: One of the things that make Waldorf women so special is that we don’t fit in everywhere.
Blair: I don’t feel like I fit in anywhere.
Eleanor: That’s because you haven’t found the right place yet.

Chuck: Stay. Not for Jack, or the hotel. Stay for me. I already lost my mother once.
Elizabeth: Chuck, I’m not your mother. I don’t know if your real mother is alive or not but I’m sure she loved you very much. And that she’s nothing like me.
Chuck: You’re right. Because my real mother could never have done to me what you did.

Gossip Girl: It seems chivalry isn’t dead after all. Lucky for this damsel in a dress, something’s never go out of fashion.

Gossip Girl: If you are what you wear, you better dress the part you want. A few lucky ladies can do no wrong. Their looks: perfection. And they’ve got accessories to match. But most girls get tired of the same old look. And they’ll do anything to get the hot new piece on their arm. And then there are those with no vision of their own. Thieves of fashion who will steal the shirt off your back.

Jack: You destroyed your relationship with your son. Who else do you have besides me?
Elizabeth: I told Chuck I wasn’t his mother. And that he deserves someone better than me.
Jack: Well I’ll warn you. You’re taking off just when it’s about to get fun.
Elizabeth: I’m starting over. I’m going to try to be the person I forgot.

Gossip Girl: And always remember, appearances can be deceiving.

Blair: Chuck, are you okay? Elizabeth—
Chuck: Is dead to me. She’s gone.
Blair: And the hotel?
Chuck: Oh… lost.
Blair: Oh, Chuck.
Chuck: What? Sorry? Don’t be. I’m not. I’ve come this far without my mother, I’m not backing down now.
Blair: Well, if it’s a war Jack wants it’s a war he’ll get.

Gossip Girl: But whatever you wear, always dress to kill. XOXO —Gossip Girl