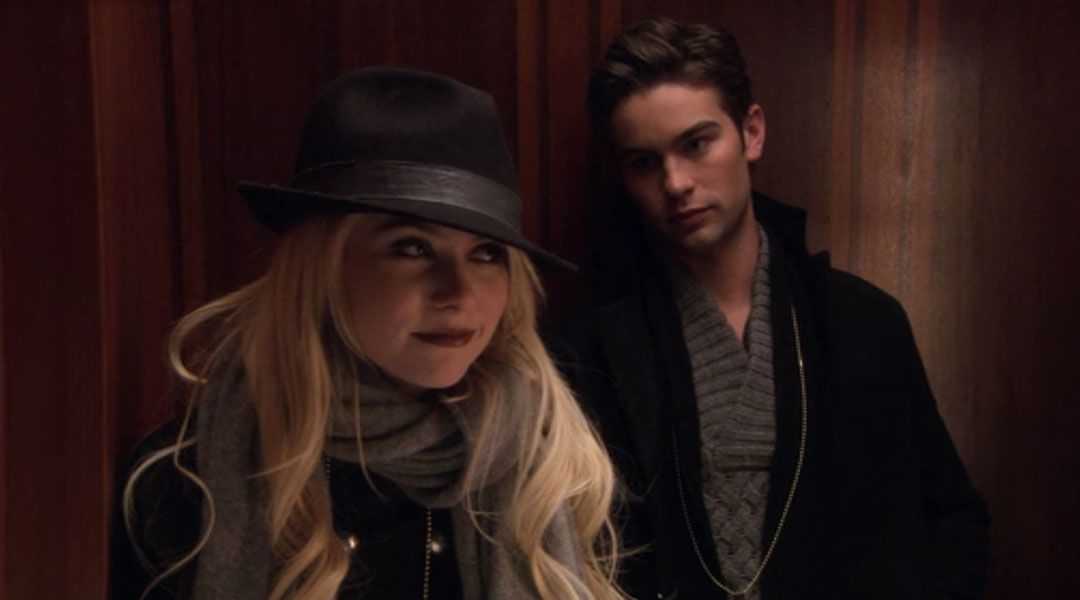 Gossip Girl: Every war has its weapons. But on the Upper East Side the rules of battle are simple: there are no rules.

Jack Bass (Desmond Harrington): You really have surrounded yourself with beautiful things. So easy to auction off. Gotta love eBay.
Chuck: As much as I hate to interrupt your fun, this has gone on long enough. I want my hotel back. Name your price.
Jack: I don’t need your money, Chuck.
Chuck: Then what is all this for, just to hurt me?
Jack: Just to hurt you. Hurting you is a noble goal. Granted, you know, it wasn’t all that difficult. You’re not the man you used to be.

Jack: It’s an interesting feeling, holding another man’s prized possession. You wonder how far he’ll go to get it back. If there’s anything he wouldn’t do.
Chuck: I will do anything.
Jack: Well there is something that caught my eye.

Eric: I think I have to unfriend Reyuke.

Dan: The application for the Tisch writing program is due in two days. I just, I need to bear down and finish my one-act.
Vanessa (Jessica Szohr): Is this the same one-act that you were ninety-five percent done with last week but didn’t want to show me until it was a hundred percent done?

Serena: The look on his face was so sad. I wanted to call him back and say, “I didn’t forget your birthday, we have these big party plans.”
Blair: Cruel to be kind, S. Nate’ll be fine.
Serena: No word from Chuck?
Blair: He’s sitting down with Satan this morning. He’s going to lay everything out on the table, see if there’s anything in the world he could offer Jack to give up the hotel. He’s come so far, become the person I always knew he could be, but he could lose it all because he opened his heart to that raven-haired con artist.
Serena: Everything will be fine, Blair. No matter what, Chuck has you, and he loves you. The Empire’s just a hotel.
Blair: You don’t understand. The hotel is proof that Bart was wrong about Chuck. It’s become who he is.

Jack: She’s right. It is a remarkable dress. Made only more so by you in it.
Blair: What are you doing here? Besides stalking me.
Jack: Please, I was just window shopping and saw something I liked.
Blair: You’re supposed to be meeting with Chuck.
Jack: Oh we met. Ideas were discussed, voices raised, expletives used. And how’s your morning been, Gorgeous?
Blair: You think you’ve won. But Chuck will find a way to get back what you stole. There’s always a way.
Jack: I told him how to get back his hotel. And here’s the kicker: it wouldn’t cost him a dime.
Blair: What are talking about?
Jack: I’m saying Chuck can have the Empire. And all it would cost is you. Spending the night with me. How’s that grab you?

Gossip Girl: Careful, B. Jack Bass’ weapon of choice comes fully loaded. And if he hits his target there’ll be at least two victims.

Blair: I’d rather spend the night with the Marquis de Sade. And yes, I know he’s dead.

Rufus: Telling a woman you like her clothes is not lying. It’s self-preservation.

Blair: How was your meeting with Jack?
Chuck: I was wrong to think I could negotiate with terrorists.

Blair: Serena, come here. You’ve done some unforgivable things. Like having sex with Nate when we were saving ourselves for each other, or killing Pete Fairman—
Serena: What?
Blair: —How far is too far? Where’s that place you can’t come back from anymore?
Serena: Blair, what are you talking about? Is Chuck going to do something to Jack?
Blair: What? I mean. Yes. There is something someone could do to get back the Empire. And yes, it is terrible. But they’d be doing it out of love.
Serena: Love of whom?
Blair: Just love. The point is, if someone does something awful but it’s for love is it okay?
Serena: If you are crossing some moral line to best Jack Bass then probably not.

Eric leaving a message: Hey Jenny It’s me. Ah. I just wanted to remind you that Nate needed to be here no later than an hour ago. Bring him to the party. Right now.

Blair: When you bought the Empire, you told me you knew you could do it because I believe in you. That hasn’t changed—you’ll find a way.
Chuck: When are you going to get it? There is no way.

Chuck: I am everything my father said I was.

Gossip Girl: Uh oh, S. Looks like Little J’s knives are sharpened. And she’s ready to use them in the battle for Nate Archibald.

Nate: Hey, c’mon. Game’s starting. Let’s go.
Chuck: I’m already dead.
Nate: You still have your photo.
Chuck: A formality. I’ll tell you what, you can kill me again if you like.

Vanya (Aaron Schwartz): Hello Dorota!
Dorota: What are you doing here? I will be killed if someone finds me.
Vanya: Why would somebody kill you? Anti-loyalists from Russia?
Dorota: No. In game.
Vanya: Then I must do something before you die. Dorota, from the first moment I saw you, I knew you were princess. And everyday you make me feel like king. Will you—
Dorota: Yes yes! Of course I will marry you.

Dorota: Some day maybe you girls find true love too. And your children not grow up to be bastards.

Chuck: I can’t let my feelings cost me all I’ve built.
Blair: Even if it means losing me instead? All I ever did was love you.
Chuck: The worst thing I ever did. The darkest thought I ever had. You said you would stand by me through anything. This, Blair, is anything.
Blair: I never thought that the worst thing you would ever do would be to me.
Chuck: You went up there on your own. She slaps him
Blair: Goodbye, Chuck.

Gossip Girl: When the battle ends and weapons are put away, new strategies take shape.

Gossip Girl: Soldiers decide to fend for themselves.

Elliot (Luke Kleintank): Hey. There you are. I think you lost this.
Eric: How’d you know what apartment I was in?
Elliot: Well I started on the first floor and worked my way up. You do realize that this is the penthouse, right?
Eric: I’m Eric.
Elliot: I’m Elliot.

Gossip Girl: New alliances are made. But there are casualties.

Jack: Welcome home, Chuck. You’re not mad at me are you? I mean you didn’t actually believe Blair could sleep with me and you two would be okay? Or are you mad because I told her.
Chuck: You may have told her, but Blair and I will get past this.
Jack: Is that what you think? Don’t you get it Chuck? Blair’s seen the real you now. It’s over. She could never love that. No one could. I hope the Empire is everything you wanted. Because now it’s all you’ve got.

Gossip Girl: In matters of love and war, all weapons cause injury. The questions is, who will live to fight another day. XOXO — Gossip Girl