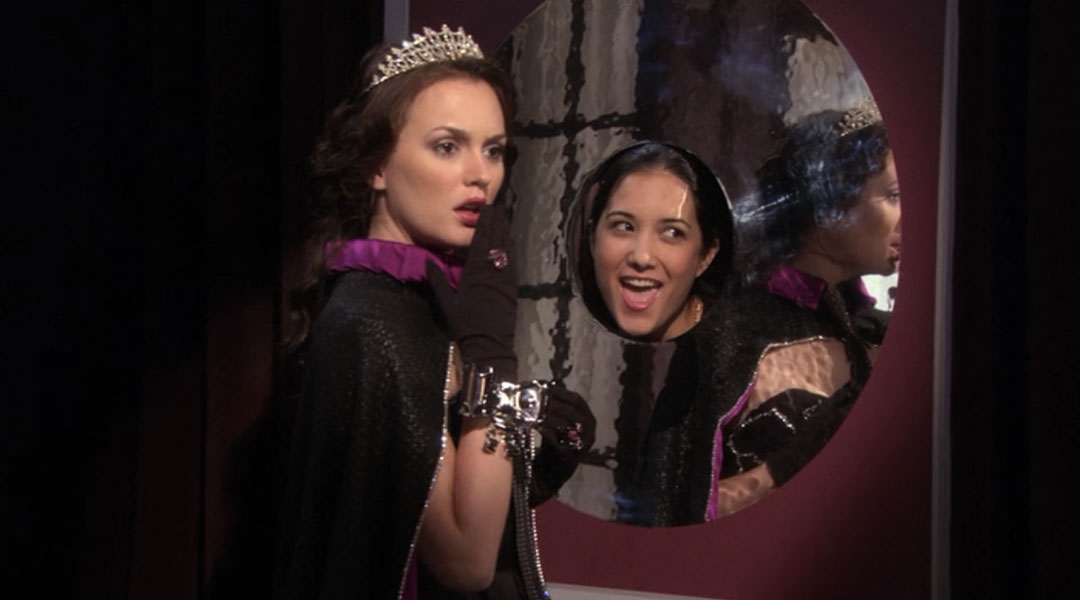 Gossip Girl: As a famed literary liar once told Oprah, memory is subjective. Memories can be embellished. Or denied. But as James Frey knows all too well, the truth always comes out.

Blair: Ugh. I don’t converse with liars or Lewinskis.

Nate: Give me a call if you need me. Which you will.

Lily: What about Brad Alexander? His mother said he’s single.
Jenny: Ah, yeah, Because he gave six girls from Nightingale gonorrhea of the throat last year.

Gossip Girl: Don’t forget yourself, Congressman. Your marriage could wind up in A Million Little Pieces.

Jenny: So Belgium, huh? I bet they have really good waffles. My family’s really into waffles.
Damien Daalgard (Kevin Zegers): Yeah I barely tasted them. My father left when I was four so he could work on the Oslo Accord.
Jenny: He worked on the Oslo accord? That sounds major.
Damien: Yeah, clearly more major than being a father, but…

Dan: Okay, man. So get this: I have plans with Vanessa tonight but then Olivia signed me up to do this cabaret thing with her. And Blair.
Nate: Oh yeah. It’s post-threesome stage one. Wherein one, if not both girls, try to prove to the other who you belong to.
Dan: Alright, so what do I do?
Nate: Well you have to prove to Olivia that you and Vanessa are still friends. Despite the fact that you’ve seen each other’s business.

Blair: Don’t get too cocky, Humphrey. We still have your sub-par acting to deal with.

Blair: Dan. When girls live together sometimes their cycles sync up. No hormones—not your’s or their’s—will get in the way of my cabaret.

Serena: High school was so much easier.
Nate: Yeah, in some ways.
Serena: Well I wasn’t attracted to married men.
Nate: Yeah but I was. Well not men, obviously.
Serena: Lady Catherine. That was my first experience being someone’s fake girlfriend. Who knew I’d do it as a profession.

Olivia: If you just let yourself, you’ll see that your feelings for her are real. And you should stop kidding yourself.

Gossip Girl: Hey Prince Charming, looks like it’s time for you to look in the enchanted mirror.

Jenny: I’m going to go use the restroom.
Damien: No, sit down. [] hand in here. And just test the product, yeah?
Chuck: That won’t be necessary.
Jenny: Chuck, what are you doing here?
Chuck: I got your message. Had housekeeping do an early turndown service on Damien’s room. That’s where they found his stash. I have my own experience in the ball pond. I’m taking you home. {to Damien} You and your father have until noon to collect your luggage. After that it’s in the river.
Jenny: Chuck, you’re totally overreacting. I’m really fine.
Damien: Dude, the lady said she’s fine.
Chuck: Dude. I’m Chuck Bass. Even Europeans must know what that means.

Well. Now that I’ve added a disco electric pop beat to Snow White’s love ballad and put your voices to autotune, it’s time to take over the land.

Dan: You know what, the disco stick tends to be an unreliable mode of transportation. It breaks down. A lot.

Vanessa (Jessica Szohr): Hello Prince. Here I am. Snow White.
Dan: Oh…
Vanessa: And I got plastic surgery and colored my hair like you suggested.

Dan: Platinum Record on the wall / It’s me now who have it all.
Just as long as true love’s kiss / Doesn’t wake this coked-up miss.

Gossip Girl: So Snow White lives. But are Dan and Olivia dead?

Chuck: Look, I get the whole “sullen teenager pushing the envelope” thing. I pushed a pack. But you’re better than that Damien guy.
Jenny: Look, I may be queen but I’m more lonely and bored than I was when I lived in Brooklyn. And being with him is exciting.
Chuck: And dangerous. Please. It takes one to know one. I saw that look in your eye the very first day you came on my radar.
Jenny: And what so-called look would that be?
Chuck: Be very careful, Jennifer Humphrey. If you go down the rabbit hole, it’s going to take more than Blair Waldorf and her army of minions to drag you back out.
Jenny: So what, are you going to walk me to my room and make sure I don’t get into any trouble?
Chuck: Just try not to run into any drug dealers in the kitchen.