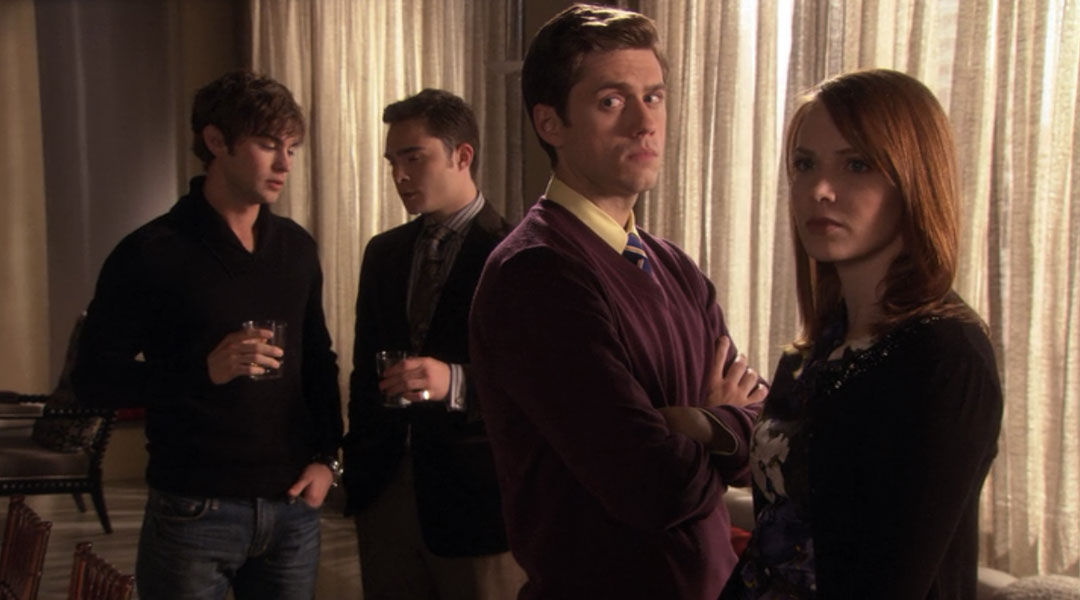 Gossip Girl: Thanksgiving began when Pilgrims and Indians came together to share the bountiful harvest.

Eric: Our Thanksgivings tend to end with french fries at a diner and someone having been in a mental institution.

Gossip Girl: On the Upper East Side, that tradition is upheld with a bountiful harvest of secrets, lies and scandals.

Chuck: Fifteen hours. It’s a record. You haven’t mentioned Serena once.
Blair: Well for much of that time I was asleep. But since you’re asking, I’ve decided I’m putting her out of my mind. Besides, I have a far more cunning and deceptive adversary to deal with.
Chuck: And when does your mother land again?
Blair: Twenty minutes. Flying from Paris to escort me back. How dumb does she think I am? She has some bomb she wants to drop on me in a controlled environment surrounded by Air Marshals and French people.
Chuck: Amazing. The holiday paranoia truly knows no bounds.

Blair: I didn’t know the Empire had hourly rates.
Serena: Where’s Nate? He’s not answering his cell.
Blair: One van der Bilt isn’t enough?
Serena: I’m not having an affair with Trip. And since you’re going to find out anyway he’s leaving his wife. And it’s not for me.
Blair: Then what are you exactly? An eighteen-year-old blonde coincidence?

Dorota: I’m not talking with Vanya. Now he not stop calling. And texting. Tweeting. Writing on Wall.

Lily: Maureen! Oh I am so glad to see you. How was D.C.?
Maureen (Holley Fain): So much to get ready. But Trip insisted we spend the holidays here.
Lily: Speaking of, I’d love to know why he has my daughter working on Thanksgiving. She said she’s volunteering at a soup kitchen with him. I’ve never seen her work these kinds of hours. Is it always like this with him?
Maureen: No, his schedule’s been especially busy these last few weeks.
Lily: This is probably an over-step, but do you think you could convince him to spend part of your Thanksgiving with us—you know, force my daughter to have a little family time?
Gossip Girl: Uh oh. Looks like someone’s small Thanksgiving might just have a big problem.
Maureen: Yes. Yes. We’d love to come.
Gossip Girl: May the Lord make us truly thankful for what we are about to receive.

Vanessa (Jessica Szohr): Then she starts lecturing the poor cashier that Thanksgiving is nothing more than a corporate agenda of the Food Industry masquerading as family sentiment.
Dan: That reminds me: if my dad asks, we followed his recipe for homemade pie crust to the letter.

Serena: What are you doing here?
Trip (Aaron Tveit): You won’t return my calls.
Serena: So you’re stalking me now?
Trip: Yes Serena. I’m stalking you. I thought our relationship wasn’t complicated enough.

Dorota: I should sleep early too. I agreed to work at Miss Lily’s tomorrow. Big Thanksgiving for them all the sudden. But she offered me time-and-a-half, so…

Blair: What are you clutching?
Dorota: Miss Eleanor asked me to pick up some things for Paris. It’s private.
Blair: You know what isn’t? The INS tipline.

Chuck: A little Thanksgiving Proclamation: If you two ever play grab-ass in my elevator again, Serena will be staying at an airport Marriott. Happy Holidays.

Vanessa: Why does my mom have to stick her nose in everyone’s business?
Dan: C’mon, Cece’s heart pumps secrets and gin. It’s not your mom’s fault.
Vanessa: You’ve been defending her all day. You’re worrying me. What’s going on with you? And you’re making that face again.
Dan: No- Alright, look. This is getting ridiculous.
Vanessa: Jenny have you ever heard of someone starting to make a brand new face at 19?
Jenny: I don’t know. Ask Eric. He’s mastered two.
Eric: Excuse me?
Jenny: Blair told me you were responsible for sabotaging me at Cotillion. What? You have nothing to say to me?
Eric: Your sweet potatoes. Are bland.

Rufus: You know what, why don’t we just eat?
Jenny: I’ve lost my appetite.
Blair: And I want pie.

Dorota: You don’t understand—we’re not married. My parents start next Polish-Soviet war. Russians once again not victors, believe me.

Gossip Girl: Another Thanksgiving has come and gone. And what am I most thankful for? The truth. Sometimes it’s the truth you’ve been trying not to face. Or the truth that will change your life. Sometimes it’s the truth that’s a long time coming. Or the truth you prayed would never see the light of day. Some truths may not be heard the way we hoped they would. But they linger long after they’ve been said. But the kind of truth I’m most thankful for? The one you never see coming. That falls right into your lap. XOXO —Gossip Girl.