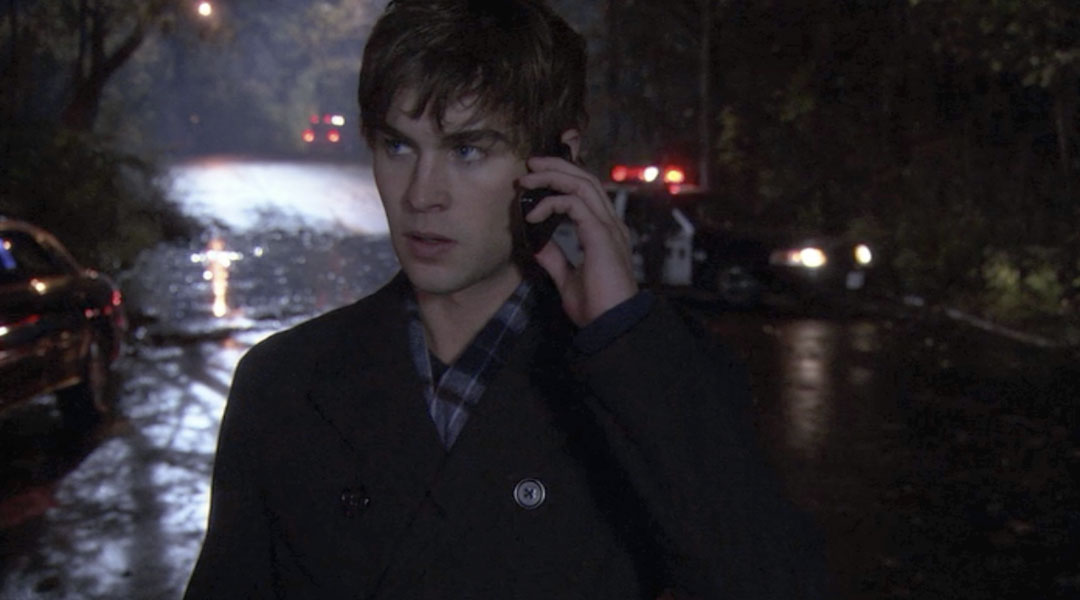 Gossip Girl: They say there are no accidents. Sometimes reality comes crashing into us. Other times it dawns on us slowly, despite our best efforts to ignore it.

Blair: This whole Scrooge act? You should be at home today. Or laying flowers on your father’s grave. I know today is the anniversary of his death.
Chuck: Why don’t you take the car and meet me at the hotel later for lunch. We’ll have our quiet time then.
Blair: Fine. Pretend like you never get sad.

Gossip Girl: We make our own fortunes. And then call them fate. And what better excuse to choose a path than to insist it’s our destiny. But at the end of the day, we all have to live with our choices. No matter who’s looking over our shoulder.

Gossip Girl: Spotted: an It Girl with an It Bag. Looks like the roadie to success is paved with cruel intentions.

Dan: Olivia called it. And I was too stupid or too stubborn to realize she was right about Vanessa. And now my window’s closed. She’s all off into this Paul Hoffman guy.
Nate: Dan, do you really think if you went toe-to-toe with Paul Hoffman that you couldn’t take him down? You’re using him as an excuse.
Dan: No, he’s a handsome guy, he’s a sophomore. He and Vanessa have a lot in common.
Nate: He’s a douche. Listen, you have two options here: you could man up, go to war and fight for the girl you love. Or just forget her and move on to a palette cleanser.
Dan: So you’re saying my only choices are extreme emotional vulnerability with a good friend. Or meaningless sex with a stranger.
Nate: Yeah. Pretty much.

Maureen (Holley Fain): Deep breath, Trip. If we handle this right, you’ll be able to keep the career you worked so hard for and have the woman of your dreams. And I’ll still have my marriage.
Trip (Aaron Tveit): Why are you okay with this?
Maureen: We both share a dream we’re not willing to give up on.

Bart (Robert John Burke): You opened your heart to Blair. And it made you weak. You can not be one person at work and another one at home. If you’re soft, you’re soft. And well, let’s face it. You’re soft.

Maureen: Trip and I aren’t getting divorced. You can have him in private but I get him in public. He keeps his career, I keep my pride and position. And you get… whatever you’re getting. Screwed, I think they call it.
Serena: You’re asking me to be his mistress?
Maureen: It’s a time honored political tradition. I’m Jackie. You’re Marilyn.

Blair: I know how hard it was to let your guard down. To let me in. But you’ve changed.

Eric: You know Jenny said that if she was chosen to be queen things would be better. But if you think about it things are actually worse.
Blair never banished a girl for getting a gift.
It is almost Christmas.
Eric: Right. There could be wish list carnage. Think about it.

Gossip Girl: Looks like the love nest has become a hornet’s nest. And here comes Nate to stir it up.

Gossip Girl: Spotted: The fall of a politician. And the rise of a hero. Poor Congressman. You’ve just been vetoed.

Chuck: How’s Serena?
Blair: She’s gonna be okay.
Chuck: Lily’s here? Eric’s here?
Blair: Everyone’s here, Chuck.
Chuck: My father always thought I was weak. And in the moment that mattered most, I was. I couldn’t be there when he ah— I left. Ran away. I’ve been pushing myself to prove him wrong and… pushing you away.

Jenny: You want a sip of my coffee?
Eric: No. Thanks.
Jenny: I was just offering.
Eric: I’m just declining the offer.

Gossip Girl: Sinatra sings “New York, New York, it’s a hell of a town.” But on the Upper East Side sometimes it just feels like hell. Even where we’re sure we’ve earned that happy ending, it doesn’t always come. Second thoughts creep in. Secret missions sneak out. And only Sleeping Beauty finds her prince. In this city nothing’s for certain. The night can push you forward into a dark future. Or plunge you into a mysterious past.