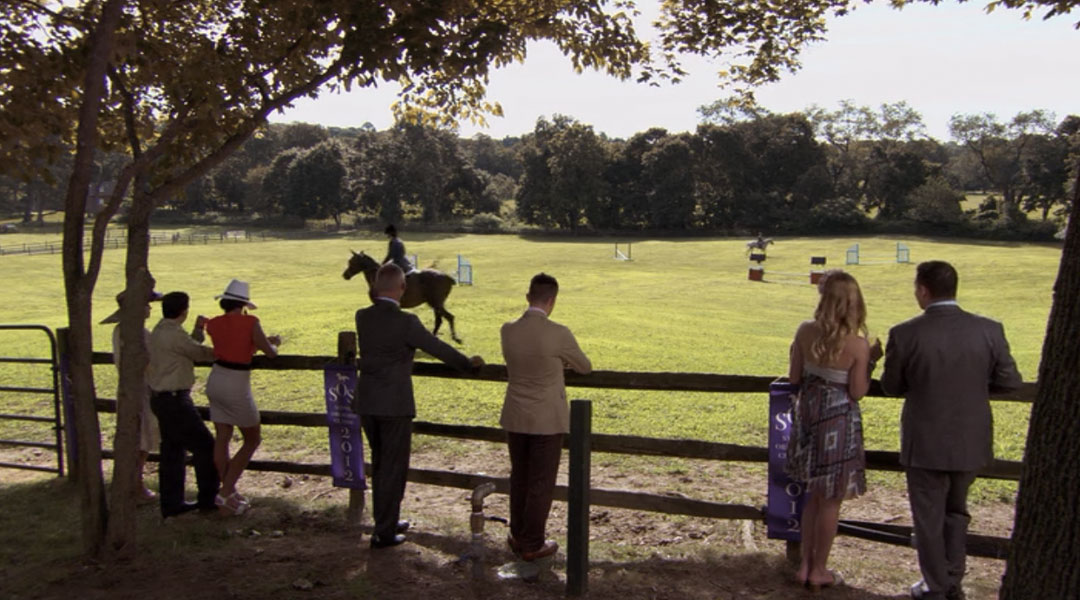 Gossip Girl: Extra extra, read all about it. The latest Upper East Sider to take central stage in the social spotlight. But you know what they say, If you can’t take the heat, then move to Hell’s Kitchen.

Nate: “Nate Archibald has the opposite of the Midas touch. Instead of everything he touches turning to gold, he turns all the gold he’s been given to dust.”
Sage Spence (Sofia Black-D’Elia): Your friend’s poor, right? I mean he’s probably just jealous.

Sage: Enough, okay? This Dan guy is full of it.
Nate: You know actually if he was making stuff up I’d be mad but I’d get over it. Thing is, he’s right.

Dan: Are they talking about how the use of real names makes this my In Cold Blood? I mean, do they like the writing? Are they making any comparisons to historical literary figures?
Georgina (Michelle Trachtenberg): Perez Hilton. But the important thing is that they’re talking about it. Literary celebrity is fleeting. We have to make the most of it.
Dan: Trust me, I have been.
Georgina: I am not talking about trolling for lit groupies at McNally’s and sleeping with your coffee dates.

Steven (Barry Watson): You can forget about dating the guy in this article ever again.
Sage: That’s fine by me. Nate is nothing like the guy in that article.
Serena: Well I don’t know what Dan wrote, but I can vouch for Nate. He’s kind and honest and a good friend. And he cares about Sage a lot. You should get to know him before you judge him. Or at least before you hit him again.

Serena: Don’t worry about Nate, you’ll really like him. He’s the best.
Steven: Well you would know. When were you going to tell me you’ve had sex with my daughter’s boyfriend?

Chuck: Is that Eleanor again?
Blair: Debriefing my mother on Waldorf Designs can wait. She knows I have no buyers and she’s just calling to yell at me.

Lily: Eric just texted me from Sarah Lawrence telling me I was on Gossip Girl.
Bart Bass (Robert John Burke): This is about our wedding?
Lily: No, the night before, when I slept with Rufus.
Bart: That’s old news.
Lily: I have no idea why I’m suddenly on the radar of this childish blog.
Bart: I think it’s fairly obvious what kind of child would be putting out such stories.
Lily: Charles? No. He would never.
Bart: He shipped a woman in from Dubai to drive a wedge between us.

Gossip Girl: Looks like Chuck’s Midas touch is still intact.
Brian Batt: I really hope we’re not talking about the same Lady Alexander. Here she is.
Gossip Girl: But a horse by any other name, is still a horse. And Chuck and Blair can’t seem to buy a clue.

Georgina: Serena. Are you here to interview for the position?
Serena: I’m sorry, do you work here now?
Georgina: As if. I’m pimping out celebutantes for Dan to have sex with. If you’re interested you can, ah, get in line.

Nate: Who let you in here?
Bart: That article this morning was unfairly biased.
Nate: It’s my job to report on other people’s business. I’d be a hypocrite to get upset about it. Plus the Spectator got plugged in a national magazine.
Bart: Glass is half full approach, huh?
Nate: Yeah.

Dan: So what’s so important you had to see me in person—and allow Georgina to frisk you?
Serena: I, I need to know, did you write a chapter about me?
Dan: Of course I did. You really think my father or Nate are really more interesting than the infamous Serena van der Woodsen?

Serena: I can’t believe I ever loved someone who could write such awful things about his friends and family.
Dan: Right, because you were thinking about my feelings when you made that sex tape.
Serena: You know what, the worst part is you actually seem to be enjoying it.

Serena: Dan says to have the next girl meet him in the bathroom.
Georgina: Hm. That’s more like it.

Lily: Well. At least I know your phone is working. What I don’t know is why you’re avoiding my calls.
Chuck: It’s nothing personal. As you know I’ve been avoiding my father, and well, you’re married to him.
Lily: Does that mean you’re behind the stories about me on Gossip Girl?
Chuck: Is that what he told you? I hope you know I would never do something like that to you.
Lily: Well. I need to hear it from you. What I also need is for you to end this feud with your father. I love both of you, and I can’t stand to be in the middle of it a second longer.
Chuck: I appreciate your desire to bring us back together, but we were never close to begin with. The man’s idea of father-son bonding was teaching me how to diversify bonds. It’s always been business between us.

Ivy (Kaylee DeFer): So what’s this big business opportunity you mentioned on the phone?
Nate: Mind if I come in?

Gossip Girl: Looks like Chuck and Blair aren’t the only ones with a surprise visitor. So much for Golden Boy going it alone.

Nate: I know you released the story about Rufus suing Dan, so I figured you might also be behind all the stories about Lily on Gossip Girl. {he picks up the letter} Oo. Well now I know where you get all the ammo from.
Ivy: Lily acts so high and mighty, but look at her. She’s been married a dozen times, she’s had countless affairs, a secret kid. She’s even spent time under house arrest but never pays the price. I mean why should Rufus suffer while Lily’s reputation remains unscathed?
Nate: I agree.
Ivy: You do.
Nate: But Lily’s friends don’t read Gossip Girl, so you should put the stories out on the Spectator.

Lily: Stone Orchard is for sale?
Chuck: Uh huh.
Lily: Well what a shame. It’s been in the same family for centuries.
Blair: Well I heard they lost a fortune in Facebook stock.

Gossip Girl: Sometimes it’s best not to call, in order to avoid being called out later.

Steven: You may be dating my daughter, but I’m dating your ex. That cancels out the need for any “sirs.”

Lily: How old is she? You know what, this is probably my fault that you have a father complex.

Steven: I have no idea why there’s a story about me sleeping with your mother. It’s not true!
Lily: Actually, it is.

Gossip Girl: There are two sides to every story. With the truth and Serena stuck smack in the middle.

Bart: You need to stop sticking your nose in where it doesn’t belong, and leave Lily out of this. Do we understand each other?

Bart: I didn’t realize you’d become such an animal lover.
Chuck: I have a dog, too. I find the company of animals preferable to some people.
Bart: Another weakness you didn’t inherit from me.

Gossip Girl: On the Upper East Side, it’s hard to know who to trust. Usually the answer is no one.

Serena: I’m sorry, but it’s going to take more than a car ride to forget you slept with my mother.
Steven: Serena, I can’t change what happened. I can forget it—obviously—but I can’t change it.

Chuck: I’m sorry, international affairs are not my area of expertise. Well, at least not this kind.
Iman (Hina Abdullah): Well the US has an embargo against trading oil with Sudan, so if that’s what he bought from my father—
Chuck: Bart was breaking federal law.

Bart: He will prey upon your maternal instincts to get between us.
Lily: Well I won’t let that happen.
Bart: Neither will I. You know how much I hate ultimatums but I’m afraid you’ve left me no choice. If you want to be with me, you need to stay away from my son.
Lily: You can’t ask me to do that. He’s my son too.

Gossip Girl: We all have things from our past we’d like to erase.
Georgina: Philip, get some popcorn. I ran into Serena today and picked up a movie for us.
Gossip Girl: But on the Upper East Side, it’s not so easy to hit delete. There’s always a record of misdeeds somewhere. And someone’s always looking for it.

Blair: Humphrey. What are you doing here?
Dan: I’m pretty sure you have a spare room up in here. I was wondering if I could crash.
Blair: You made it pretty clear you were done with me. What’s changed?
Dan: I realized I made a mistake. I’ve missed you. I’ve missed my friend. Last year when you had no one I was there for you. I kinda need you to do the same for me right now.
Blair: Serena’s bed is empty. Make yourself at home.
Gossip Girl: Better not to ignore the past but learn from it instead. Otherwise history has a way of repeating itself. XOXO –Gossip Girl.