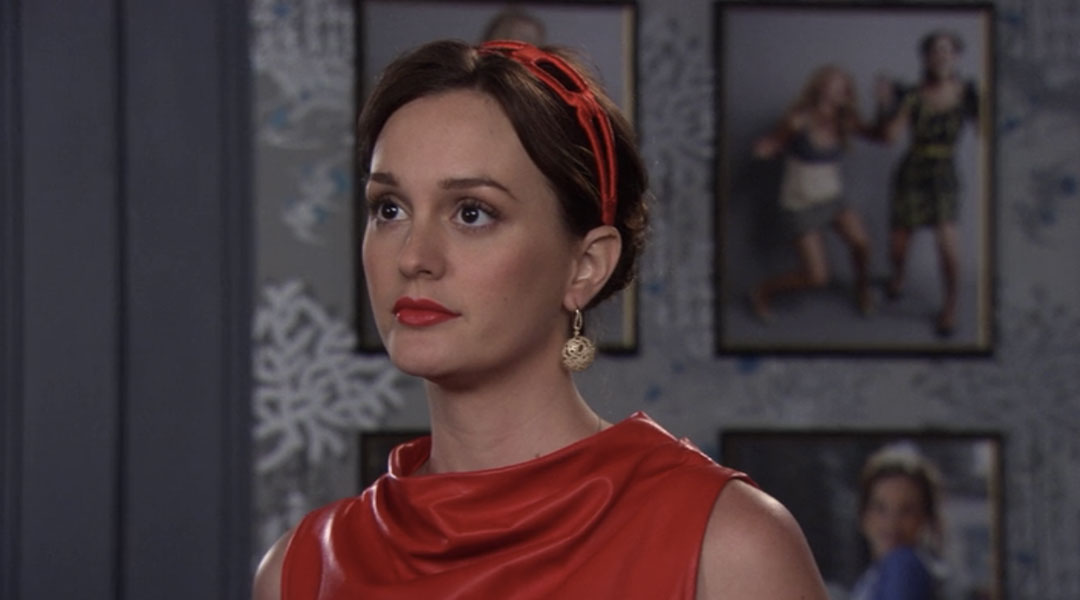 Gossip Girl: Manhattan has weathered her share of storms–heat waves, hurricanes, even earthquakes. But these days it looks like a new force of nature is taking shape on the Upper East Side.

Blair: Ah, there’s nothing I love more than the sound of a sweatshop in the morning.

Blair: The Devil is in the details and I’m about to start worshipping Satan.

Nate: I heard you on the phone earlier this morning. It didn’t sound like Blair.
Chuck: Deeper voice, darker mind. My uncle Jack. His people on the ground in Dubai are helping me to find out who the mystery man with Bart in Amira’s photo is.
Nate: Did he come up with anything?
Chuck: Not yet.

Chuck about Dan: I may be negotiating with terrorists. But you’re harboring a fugitive.

Rufus: I would love nothing more than to have you on my arm, but before we announce our relationship status to the world, I have to tell my kids first. Jenny sent her blessing from London but I still haven’t connected with Dan.
Ivy (Kaylee DeFer): Well he better hurry up and get back from Europe so I can officially be your girlfriend.

Serena: What do you want?
Blair: I’m not going to even pretend to be calling you as a friend right now, because you have made it quite clear that you are not mine. But I do have a mutually beneficial business opportunity.
Serena: I highly doubt that.
Blair: I need a power It Girl to walk in my show.

Gossip Girl: They say history repeats itself. But looks like B is charting a brand new course to epic collapse.

Doctor: It seems as if you’re suffering from severe exhaustion and dehydration. Have you been sleeping? Eating?
Blair: Do I look like I’ve been eating? Don’t insult me.
Dorota: Miss Blair been running around like Rhesus monkey. She take no moment for eating or sleeping or resting or stopping. Is exhausting me too.

Serena: I’m supposed to be mentoring her.
Nate: You? A mentor?
Serena: Just go with it.

Dan: You here on one of your famous blackmail missions? I hope you got it all on film.
Serena: Suck it, Humphrey.

Blair: The minions are on probation because of Poppy-Gate and Dan is still furious with me. I just want someone who can read my mind. Is that too much to ask?
Chuck: Hello Blair.

Sage Spence (Sofia Black-D’Elia): Do you really think I care about your childhood baggage? I go to therapy. I have enough of my own.

Blair: Oh, the Ice Woman cometh.
Serena: I wanted to apologize about our conversation earlier. I know that I was way out of line.
Blair: Save it, Serena. What do you want?

Blair: So what you’re saying is you want to use me, your non-family, to make a good impression on your new “real” family.
Serena: Yeah. Yeah, having Sage in your show will save my relationship with Steven.
Blair: Okay, I’ll do it.
Serena: Thank you.

Gossip Girl: Careful ladies. Turns out Sage might be a wolf in B’s clothing.

Rufus: Dan, you’re my son and we have to find a way to put this behind us, but… when it comes to Ivy, you’re way out of line. I’m an adult. And you need to respect my decision to be with her.
Dan: Being with her is the adult decision? Throughout my entire life you have portrayed yourself as the moral compass, the guy who always does the right thing. According to Rufus Humphrey, there’s no road like the high road.
Rufus: Yes. I believe in doing the right thing.
Dan: So can’t you see what you’re doing with your life? Your whole “thing” is a lie. At least I wrote the truth. And the truth which, by the way, is a defense against libel, so you’ve got no case.
Rufus: Case? I don’t want a case! I just wanna have a real conversation with my son. So let me know if you see him around.
Dan: I will. I gotta go.

Ivy: That didn’t sound like it went very well.
Rufus: Did you leak news that I was threatening to sue my son?

Nate: Listen, I wanted to thank you for choosing to advertise with us at the Spectator this week. It’s been a real pleasure doing business with you and your team.
Erica Winograd (Frances Turner): We were very excited about Dan Humphrey’s inaugural serial. We knew it would draw a lot of eyeballs.
Nate: And it has. And I know Dan’s piece next week will garner even more attention. You should definitely think about buying up some more space for that one as well.
Erica: We did, Nate. In Vanity Fair.
Nate: Wait, I’m sorry. What?
Erica: Dan’s serial is continuing in Vanity Fair. Yeah, I thought the Spectator was just a one-time occurrence. Which is too bad for me because Graydon is charging ten times what you did for ad space.

Gossip Girl: It’s B’s party and she’ll cry if she wants to. ‘Cause looks like this birthday suit isn’t cause for celebration.

Ivy: I only did it because I wanted to protect you. No one ever stands up for you. I thought if I threatened a a lawsuit on Gossip Girl The Spectator would have to retract Dan’s piece.
Rufus: Standing up for me is one thing. But you shouldn’t interfere in matters between me and my son.

Nate: Why the hell do my advertisers think that Vanity Fair is publishing the rest of your serial?
Dan: Because they are.
Nate: Dan. we had a deal.
Dan: A handshake is hardly a deal.
Nate: Oh my god, I think I’m going to hit you.
Dan: I told you last week it was a bad idea to mix business and friendship. You wanted me to go to Rufus before publishing the piece. And today when he, when he threatened a lawsuit you freaked out.
Nate: I was trying to protect my newspaper.
Dan: What do you want me to say? Vanity Fair is the big time, and the more readers I have, the more power I have. It is that simple.
Nate: I thought we were in this together.
Dan: We were. And then something better came along.
Nate: Okay, now I know I want to hit you.

Gossip Girl: Looks like these besties were bested by a newbie. When Sage’s dress came off they both came undone.

Steven (Barry Watson): Save it, Sage. I know you set Serena up. I should have known as soon as you started talking about the fashion show that you were planning something. Serena isn’t the one who should be apologizing. It’s you.

Gossip Girl: Tolstoy wrote that all happy families are alike. But every unhappy family is unhappy in its own way. Especially on the Upper East Side. Some are only too happy to be distracted from their pain. While others choose to bite the hand that feeds them. Even when they have no idea where their next meal is coming from.

Nelly Yuki (Yin Chang): I guess you took my advice and started playing by your own rules. How does it feel.
Dan: Ah, weird. Kinda dirty but good. Like you said, the truth is a very powerful thing.

Blair: I’m all yours. Mind, body and scheme.

Gossip Girl: But whether your family is happy or unhappy, it’s always best to stick together. Because some ties are simply unbreakable. XOXO –Gossip Girl.