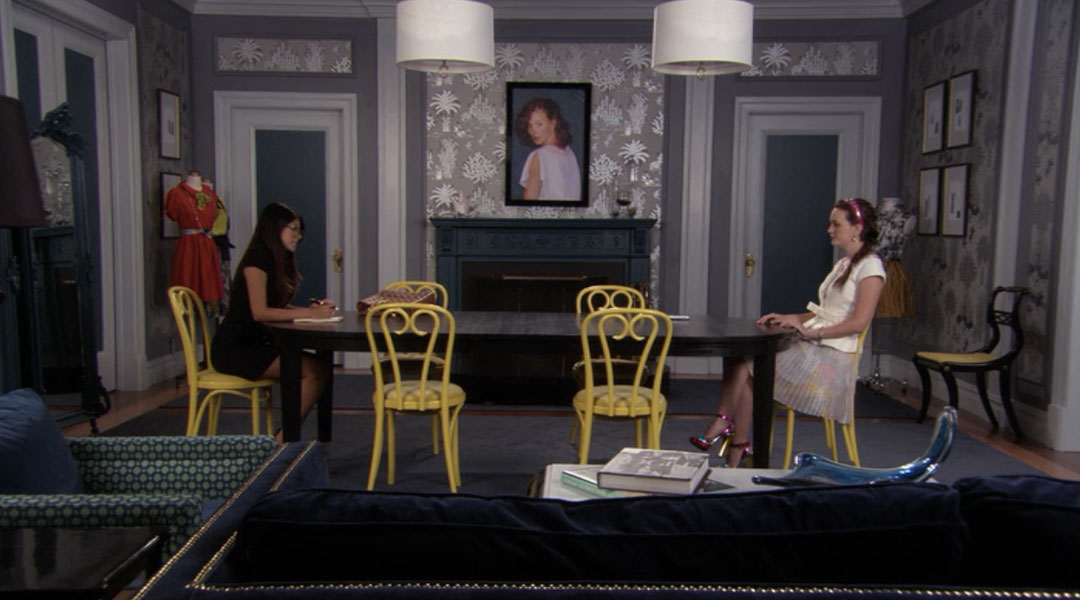 Gossip Girl: Up and at ’em, Upper East Siders. It’s important to start your day right. There’s nothing worse than waking up on the wrong side of the bed.
Dan: I thought we agreed you’d stop watching me sleep.
Georgina (Michelle Trachtenberg): I lied. I’m letting you stay here for free. There has to be something in it for me.
Gossip Girl: Except maybe waking up alone.
Blair: Dorota! Why did you let me sleep? It’s WWD day. We have to take the fashion world by storm.
Gossip Girl: I can hardly wait to see what today brings.

Amira (Andrea Gabriel): I’m booked on the seven o’clock flight to Dubai.
Chuck: Please, just a little more time.
Amira: We’ve spent all week pouring over the notes of every meeting I interpreted for Bart. There’s nothing, Chuck.
Chuck: Look, I know the reason my father faked his death has something to do with this hotel deal. It has to be here.
Amira: We looked. It’s not.
Chuck: Then why would he lie about being in Dubai? Why would all the negotiations happen completely off the books? Why would he pay you ten million dollars not to ask any of these questions.
Amira: If he’s hiding something, I don’t know what. I’m sorry. I need to get home to my fiancé. There’s nothing more I can do.
Chuck: You could come to brunch.

Blair: All these years of folding my sweaters and fluffing my pillows has really paid off. You’ve developed taste!

Dan: Your sofa might be chic, but my neck is not happy with this kink.
Georgina: Would you prefer the kink of watching your father do it with Charlie again?

Georgina: Your loss of faith in humanity turns me on. As does the fact that your book was rejected by Simon & Schuster and you were dropped by your agent.
Dan: I still don’t get why they didn’t want it. They sent me to Italy to write Inside: Part Two,
and this time I deliver the real story with real names. Raw, hard facts.
Georgina: Please say “raw” and “hard” again.

Nate: This is a long time for you to be mad at Blair just for being Blair.
Serena: I’m not mad, I’m maturing. We’re just naturally growing apart.

Nelly Yuki (Yin Chang): You’re lying.
Blair: If I were, it would be to protect Waldorf Designs from your biased opinion of me. Which is based on nothing but good clean high school fun.
Nelly Yuki: I still have night terrors about Nairtinis and yogurt bombs.

Blair: Why do you look like the “before” pictures of people who need BOTOX? You can’t be worried that Poppy’s collection is better than mine?
Kati (Nan Zhang): Actually it’s pretty much the same.
Blair: What do you mean, “the same”? Like the same… quality? The same style?
Kati: The same, Blair. She’s using that exact fabric.

Gossip Girl: Poor Chuck. Everyone knows the first place to check for secrets is under the bed. Or in it.

Dan: What is the point of publishing an exposé if you’re not going to expose everything?
Georgina: Who cares? They’re willing to pay for the version that works for them. It’ll get us both out of Brooklyn.
Dan: No, but then I’m compromising my integrity again. What happened to telling the truth about these people?
Georgina: Save your passion for your poetry. Which you can write as much as you want once this makes you rich and famous.

Georgina: Why is the handsome vacant one calling me?
Dan: If you’re referring to Nate, he has a surprisingly high IQ.

Gossip Girl: Looks like someone’s getting dressed to kill. Or at least for a hell of a fight.

Dan: Georgina, what are we doing here? We weren’t even invited.
Georgina: Did not having a formal invite ever stop Norman Mailer from showing up?

Nelly: I had higher hopes for you, Humphrey.
Dan: Sorry, what?
Nelly: How could the smartest boy at St. Jude’s still want everything he can’t have?
Dan: No, I- I don’t want her. I was just… uh… I was just observing. It’s what writers do.
Nelly: I didn’t mean Blair. I meant “in”. Your whole Gatsby-ish obsession.
Dan: Fitzgerald seemed to make a good career out of it.
Nelly: If you wanna die a miserable drunk trying to impress people who don’t know you exist.
Dan: There is that fatal flaw.
Nelly: I got over mine when I went to Yale and met a bunch of other smart losers.
Dan: Nelly, you’re not a loser.
Nelly: Yes, I am. And so are you. They’ll never let us in. The sooner you accept it, the sooner you can stop trying and start competing.
Dan: That’s kind of tough when they already have everything.
Nelly: We have the truth. That’s how the losers win. We stop playing by their rules and make our own.

Serena: Why didn’t you tell me you have a daughter?
Sage (Sofia Black-D’Elia): Obviously because she’s the same age as you are.
Steven (Barry Watson): Serena is an adult. And she’s not missing her curfew and she’s not in high school.
Serena: Yeah, and I’m not going to let this drag me back into it. I have a check to present.

Sage: I’m not sleeping with anyone but you. And it’s legal, I checked. So can we please just go back to your place and do that?
Nate: No! You’re seventeen. And I’m pretty sure you’re grounded.

Bart Bass (Robert John Burke): How about we call a truce? It would make Lily happy. She’s very upset that you’re trying to destroy our marriage.
Chuck: I don’t care about your marriage and neither do you.

Gossip Girl: Think fast, B. Pencil skirts or peplum? The only look you have now is egg on your face.

Nate: There are details in here the world doesn’t need to know. These are people you care about.
Dan: Nothing good came from my protecting them. Once I realized I live in a world where Chuck Bass gets the girl, everything seemed very clear. I’m not playing by anyone else’s rules anymore. I’m making my own. If you don’t want this, I can self-publish.
Nate: No no no, I want it. I’m just saying, I’ve only read one page and I’m guessing you might lose some friends and family.
Dan: My “friends” chased my sister out of town and chose a guy who traded her for a hotel over me. And my “family”… is sleeping with a con artist. I’m not losing anything here. I’m taking what’s mine.

Bart: I know how important family is to you, Lily. But I think you may need to accept that my son may no longer want to be a part of ours.
Lily: Well I’m not ready to give up hope yet.

Gossip Girl: No one said being a parent would be easy. Some children will do everything in their power to destroy you. Others will wilt under the weight of your crushing expectations.

Dorota: She know you can do this, Miss Blair.
Blair: I hope she’s right. My entire future here and with Chuck depends on it.

Gossip Girl: And some will become parents themselves. You know I disapprove of teenage pregnancy. But a teenage stepdaughter? That’s my kind of fun. XOXO –Gossip Girl.